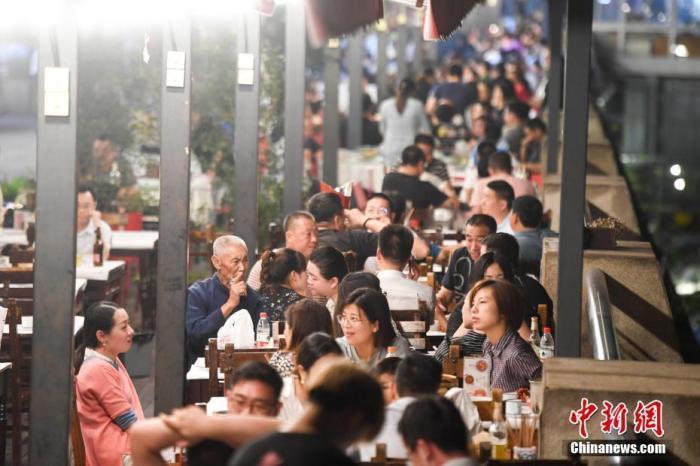 On November 16, the National Bureau of Statistics released China’s economic data for October. Another data for the first time turned from negative to positive. This is the growth rate of catering revenue.

In October, buying, buying and buying continued to accelerate, and consumption growth continued to pick up after turning positive for the first time in September.

Data show that in October, the total retail sales of consumer goods was 3,857.6 billion yuan, an increase of 4.3% year-on-year, an acceleration of 1.0 percentage point from September.

Among them, catering revenue was 437.2 billion yuan, a year-on-year increase of 0.8%, and the growth rate turned positive for the first time this year.

Nowadays, the smoke and fire in Chinese society are getting stronger, and there are long lines at the door of hot pot restaurants such as Haidilao. Therefore, the growth rate of consumption, especially the income of catering, has turned positive, and your retaliatory restaurant has played an important role.

Fu Linghui, a spokesperson for the National Bureau of Statistics, analyzed that the consumption recovery trend is good, the consumption environment is improving, the domestic epidemic prevention and control results are obvious, and everyone’s confidence in going out to consume is increasing, which has created a recovery of consumption. good conditions.

In addition to the positive growth of catering revenue, there are also some livelihood indicators that have performed well.

Complete the annual new employment target ahead of schedule

Employment is the foundation of people's livelihood and the source of wealth.

The urban surveyed unemployment rate in 31 major cities was 5.3%, a decrease of 0.2% from September.

Fu Linghui believes that the employment situation continued to improve in October, and the improvement in employment is conducive to the growth of residents' income. In the first three quarters, national residents' disposable income, net of price factors, increased by 0.6% year-on-year, which is also picking up.

This is conducive to the continuous improvement of consumption power.

In terms of prices, in October, the national consumer price (CPI) rose 0.5% year-on-year, and fell below 1% again after 42 months.

The sharp drop in CPI growth was mainly due to the decline in the value of the "Second Brothers".

In October, pork prices fell by 2.8% year-on-year, the first decline after 19 consecutive months of rising, affecting the CPI drop by about 0.13 percentage points.

"From this year's situation, due to the continuous increase in the production and supply of live pigs in various regions and departments since the beginning of the year, this month's pork price ended the 19-month year-on-year increase, and the first decline occurred." Fu Linghui analysis, later view , The base of pork prices increased last year, coupled with the increase in pork supply, it is possible that the price trend will be reduced to a certain extent.

Wen Bin, chief researcher of Minsheng Bank, told a reporter from Chinanews.com that on the whole, the CPI has risen by 3% year-on-year in the first 10 months, and has fallen back to the 3.5% annual control target.

In the next stage, as the CPI base continues to rise during the same period last year, and the supply of pork and other foods continues to be repaired, supply and demand are expected to remain balanced, and the CPI center will continue to fall.

The data shows that in October, the price increase of the real estate market in 70 large and medium-sized cities maintained a steady decline, and the sales price of new commercial residential and second-hand residential buildings in various tier cities fell overall.

Preliminary estimates show that in October, the sales price of newly-built commercial residential buildings in four first-tier cities rose by 0.3% month-on-month, and the growth rate was 0.1% lower than the previous month.

The sales price of second-hand housing increased by 0.5% month-on-month, and the increase was 0.4 percentage points lower than the previous month.

Zhang Dawei, chief analyst of Centaline Property, told a reporter from Chinanews.com that the “Golden Nine and Silver Ten” of 2020 has passed. After the property market surged from July to August, the overall property market began to show a significant slowdown in growth from September to October.

Looking at housing price data in 70 major cities across the country, housing prices in 45 cities for newly built houses rose in October, a decrease compared to May-August.

"From the October housing price data, Yangzhou has become the leader in housing price rises in the country, and it is worth noting that among second-hand housing cities, Shenzhen is once again the country's first." Zhang Dawei analyzed that overall, the rising trend of housing prices in most cities remained unchanged, but The growth rate will continue to slow down.