The IMF improves its forecasts for the large developed economies with only one exception: Spain

The International Monetary Fund (IMF) estimates that the coronavirus has thrown "extreme poverty" - that is, to live on less than $ 1 and 61 cents a day - to 90 million d 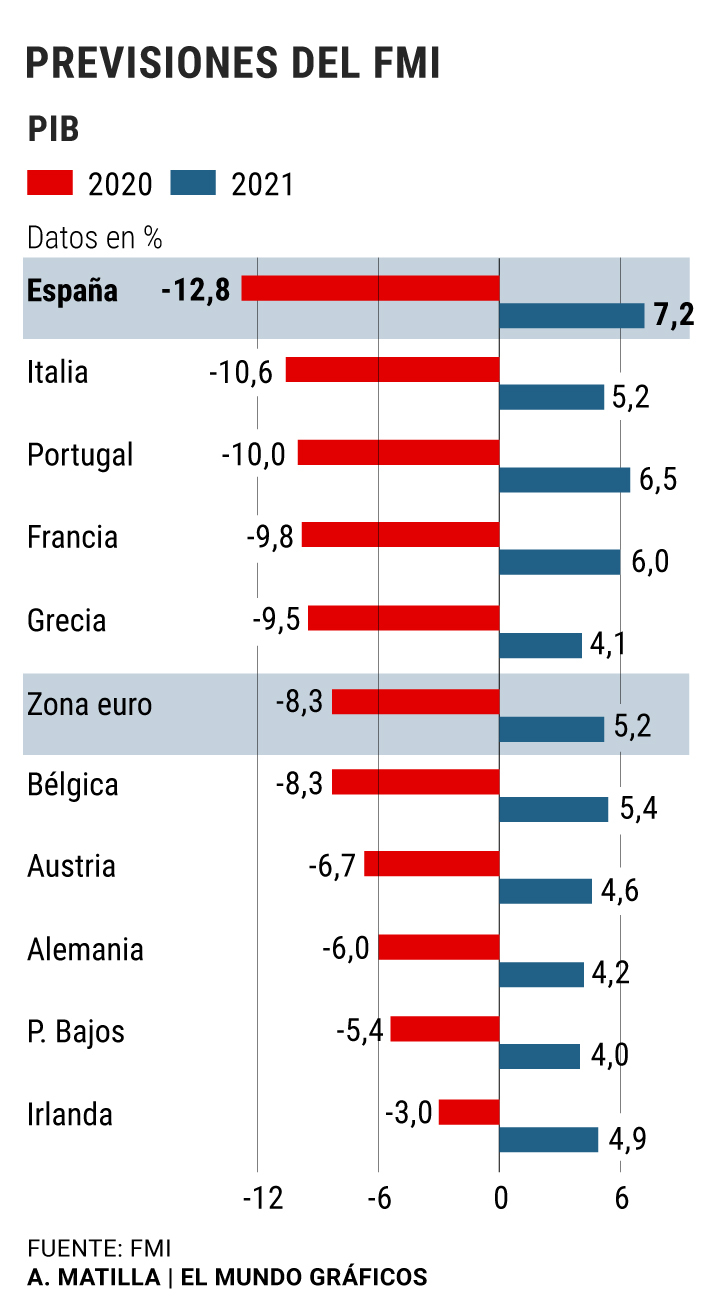 the coronavirus has thrown into "extreme poverty

, the equivalent of twice the population of Spain.

It has caused the greatest crisis in history since the Great Depression that occurred 90 years ago.

But even with everything, things are looking up.

In the developing world, only India and the so-called ASEAN-5, that is, Thailand, Indonesia, the Philippines, Malaysia, and Vietnam.

In the industrialized world, there is only one country that does not improve: Spain.

Its GDP will fall

It is the highest figure of the 17 large economies that the Fund always highlights in its analysis.

And, although his Spain will 'bounce' in 2021 as activity recovers after this year's collapse, the rise will not imply a relief for the population.

The best example of this is

unemployment, which this year climbs to 16.8% of the workforce

- one in six workers - and will remain there in 2021 despite the fact that GDP will grow that year, according to the IMF, 7.2%.

That 7.2% is by far the highest of the major economies surveyed by the Fund.

Spain is also the country whose forecast for 2021 is revised the most upward.

But that data is more of an optical effect.

The decline in 2020 is so gigantic that the rebound in 2021 does not make up for it by any means.

Furthermore, if many economies have the potential to experience what is known as "an upward scenario" - that is, things are better than expected - the opposite is true in Spain, due to the weakness of its business fabric and dependence on tourism.

According to the IMF,

due not to confinement, but to the financial problems that these companies will have to face as a result of the crisis.

In Spain, the hotel and catering industry, often in family establishments, are one of the main sources of employment in the tourism sector, which in total

All of this is clear in the new report '

', which the IMF presented today.

Already in the third paragraph of the Introduction, the document states that "we

This upward revision is due to three factors.

in the large advanced economies, which were not as negative as had been projected."

, which has been stronger than expected."

signs of a faster recovery in the third quarter

All this has been due, according to the Fund, to the

massive intervention of the States

, through "the monetary, fiscal, and regulatory responses" of the Governments, which

"have maintained the disposable income,

protected the cash flows of the companies, and maintained the supply of credit. "

Otherwise, the world would have been plunged into a giant recession accompanied by "the financial catastrophe of 2008-2009".

Thus, according to the IMF,

states have saved the world economy

, putting it in a kind of 'induced coma'.

some countries are in a deep coma

The fall in GDP of 12.8% in Spain is not the same as that of 4.3% in the United States, to cite two extreme examples.

- inside and outside the EU -

seem to have suffered the most from the crisis

The industrialized economies outside the eurozone are also collapsing: Canada, 7.1%;

and Japan, despite having been one of the developed countries least affected by the virus despite its proximity to China, 5.3%.

In the US, the upward correction is no less than 3.7 percentage points.

In France and Italy - two of the countries hardest hit by the pandemic - 2.7 and 2.2 points.

The only exception is Spain

, the only industrialized country whose

Its collapse of 12.8% would be the equivalent of practically erasing the entire tourism sector at a stroke.

There are only two other countries that register double-digit production drops: Italy itself (10.6%) and India (10.3%).

The country hardest hit by covid-19

In the context of Covid-19, every prediction has a huge degree of uncertainty.

But, no matter where you look,

The Fund's report was closed two weeks ago, when the confinement of Madrid had not taken place and, in that sense, the most that the institution reaches is to affirm in a hasty "update" inserted at the last moment that "at the end In September there were new spikes in places that had flattened the curve: Australia, Japan, Spain, and France. "

The report also points out that

the economic impact of the coronavirus is very irregular, although it especially affects "the most vulnerable people

The IMF uses data on the use of Vodafone phones in several countries, including Spain, to detect how the restriction of mobility particularly affects young people and women - in the case of the latter, because, when schools close, they are they who tend to take care of children -.

The reasons for Spain's vulnerability were already listed by the IMF to this newspaper in July:

, its main economic activity is tourism, and it has a business fabric of small companies with few capital reserves and little access to credit.

There, the outlook improves for Spain, although, more than anything, due to the 'rebound effect' derived from the statistical impact of returning to the 'new normal' after this year's brutal collapse.

a far cry from this year's plunge.

The way out of the crisis, thus, will be very slow in Spain.

Above all, for the most disadvantaged.