China News Service, Changsha, September 24 (Reporter Bai Zu and Lu Yi) On the 24th, the China (Hunan) Free Trade Zone Pilot Zone (hereinafter referred to as "Hunan Free Trade Zone") was officially unveiled. According to the overall plan, the Hunan Free Trade Zone will create a world-class advanced manufacturing cluster, a pilot zone for in-depth economic and trade cooperation between China and A 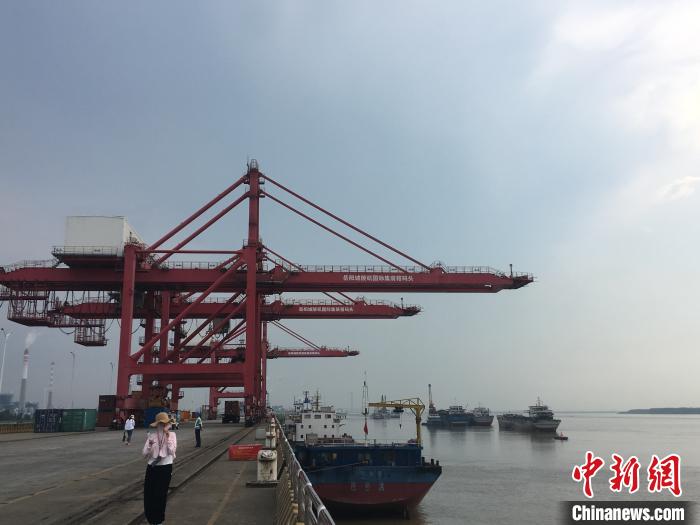 According to the overall plan, the Hunan Free Trade Zone will create a world-class advanced manufacturing cluster, a pilot zone for in-depth economic and trade cooperation between China and Africa, and an international investment and trade corridor linking the Yangtze River Economic Belt and the Guangdong-Hong Kong-Macao Greater Bay Area, forming a "one industry, one park, one The three characteristic strategic positioning of the corridor.

"This is a milestone event in the process of Hunan's reform and opening up, and it is also a landmark achievement of Hunan's implementation of the'innovation-led, open-up and rise' strategy. It means that Hunan is standing on a new high ground for open economic development." Secretary of the Hunan Provincial Committee of the Communist Party of China Du Jiahao stated at the unveiling ceremony of the Hunan Free Trade Zone and the construction mobilization meeting that the construction of the free trade zone will attract national and even global technology, talents, data, capital and other production factors to Hunan, and promote Hunan's high-level opening up. "Double cycle" and high-quality development, set sail and open a new stage in the development of reform and opening up.

Yueyang Chenglingji Port, the sea relay route from this port to ASEAN and Australia has achieved normal operations.

The Hunan Free Trade Zone was established at a critical moment when China won both epidemic prevention and control and economic and social development.

At present, China's external conditions and internal foundations for participating in international cooperation and competition are changing. The central and western regions are where China's economy has the greatest room for maneuver and potential.

"Hunan will combine its own advantages to seize the major opportunities of digital and intelligent development, promote the extension of advanced manufacturing to the high-end of the value chain, promote the integration of advanced manufacturing and service industries, and participate in the construction of the'Belt and Road' and international capacity cooperation. "He Baoxiang, vice governor of Hunan Province, said.

"The key to building a world-class advanced manufacturing cluster is to form a strong innovation force that supports industrial development." Xu Xiangping, director of the Hunan Provincial Department of Commerce, introduced that the Hunan Pilot Free Trade Zone will aim to form a good ecosystem that supports innovation, and in the innovation talent policy , Platform construction, intellectual property protection and application, etc., carry out reform pilots in various aspects, enhance Hunan's agglomeration and attractiveness to domestic and foreign innovation factors, and accelerate the cultivation of the internal driving force for the innovative development of advanced equipment manufacturing.

In terms of expanding new space for the development of advanced manufacturing, the Hunan Free Trade Zone takes the “Belt and Road” as an important approach.

The Hunan Free Trade Zone will also initiate a number of reforms to introduce financial water for the development of advanced manufacturing.

Such as: encourage foreign investment in advanced manufacturing, support the implementation of major foreign projects in the region; explore foreign equity investment management methods that meet the development needs of the real economy, and launch a pilot program for qualified foreign limited partners (QFLP) for foreign-invested equity investment enterprises; relaxation The application conditions for the establishment of investment companies by foreign investors have eliminated the requirement for the number of foreign-invested enterprises established by foreign investors in China.

Located in the African Coffee Street of the Gaoqiao Market in Changsha.

"One Park": A pioneering zone for in-depth economic and trade cooperation between China and Africa

An open economy is a shortcoming of economic development that Hunan has been striving to catch up with for many years.

In recent years, the total foreign import and export volume of Hunan Province has increased year by year. In the past three years, the total foreign trade volume has been rising at a rate of 100 billion yuan. In 2019, the total import and export volume of Hunan Province reached 434.22 billion yuan, ranking first in China with a growth rate of 41.2%. ; And it has formed strong export advantages in many fields, and has frequent economic exchanges with ASEAN, Africa, Europe, Latin America and other regions.

The landing of the mission of the "Pioneer Zone for China-Africa Economic and Trade Cooperation" in Hunan is a testament to the rapid development of Hunan's open economy.

At present, the African Coffee Street has wafted the aroma of coffee in the Changsha Gaoqiao Market.

It not only brings together fine coffee beans from Ethiopia, Kenya, Tanzania, Uganda, Angola and other African countries, but also provides professional incubation services such as raw materials, equipment, training and guidance, and is a "one-stop" incubation base for coffee and tea.

The Changsha area will also focus on expanding local cooperation between China and Africa, encourage targeted cooperation with major African cotton producing countries such as Benin, Burkina Faso, Chad, and Mali, and support the expansion of imports of high-quality agricultural products such as African coffee, cocoa, cashew nuts, and anchovy. , Expand the air passenger and cargo routes between Changsha and Kenya and other African countries, and implement related projects for human resource training in Africa.

The Hunan Free Trade Zone covers the three major areas of Changsha, Yueyang and Chenzhou, with an implementation area of ​​119.76 square kilometers.

Among them, Changsha is an important node city for the "Belt and Road" construction and an important central city in the Yangtze River Economic Belt; Yueyang is the open "North Gate" of Hunan, with 163 kilometers of the "Golden Waterway" of the Yangtze River; Chenzhou is the "South Gate" of Hunan's opening. Hunan and even the central region are the bridgehead connecting Guangdong, Hong Kong and Macao.

“The three major areas connect to the city clusters in the middle reaches of the Yangtze River to the north, and to the Guangdong-Hong Kong-Macao Greater Bay Area to the south. They closely link China’s two major economic sectors with the most open potential and vitality.” He Baoxiang introduced, Hunan Free Trade Zone Based on the regional advantages of Hunan, focusing on the characteristics and key industries of the three areas, it will explore a new model of area linkage, coordination, efficiency, and competitive development.

The Changsha area will focus on the construction of the “Belt and Road”, highlight the airport economy, build a global high-end equipment manufacturing base, a high-end modern service industry center in the inland area, a pioneer area for in-depth economic and trade cooperation between China and Africa, and a rising growth pole in the central region; Hong Kong economy, build a comprehensive shipping logistics center in the middle reaches of the Yangtze River, an inland port-based economic demonstration zone; Chenzhou highlights the direct connection between Hunan, Hong Kong and Macao, and builds an important platform for inland areas to undertake industrial transfer and processing trade transformation and upgrading, as well as a Xiang, Guangdong, Hong Kong and Macao cooperation demonstration zone.

Taking the construction of a free trade zone as the node, Hunan will use the sea, air, highway and rail to connect the Yangtze River Economic Belt and the Guangdong-Hong Kong-Macao Greater Bay Area, improve the function of a three-dimensional transportation hub, accelerate the expansion of open cooperation in the service industry of Hunan, Guangdong, Hong Kong and Macao, and promote the transfer of industries, and comprehensive improvement The overall level of the service industry in Hunan provides a strong support for the development of Hunan's manufacturing industry and builds an international investment and trade corridor.

To this end, the new institutional innovation arrangements in the Hunan Free Trade Zone will also break through the "medium obstruction" of industrial transfer.

For example, explore the establishment of a cross-provincial qualification and certification mutual recognition mechanism. After enterprises move into the free trade zone across provinces, they will continue to enjoy the original qualifications and certifications; establish a list of corporate technology requirements to promote the transformation of scientific and technological achievements...

He Baoxiang stated that Hunan will take institutional innovation as the core, reproducible promotion as the basic requirement, and build a market-oriented, legalized, and internationalized business environment as the focus, boldly experiment, venture boldly, make independent reforms, and vigorously develop initiatives. , Differentiated and integrated reform exploration, to promote Hunan to break new paths in high-quality development, to show new deeds in building a new development pattern, and to demonstrate new responsibilities in serving the national development strategy.