One ton rises by 860 yuan, trucks line up to pick up goods, why is this market so "steel"

Since the beginning of this year, my country's steel market has been volatile. After the downturn in the first quarter, since the second quarter, demand has gradually recovered. In the recent period, some steel mills have seen a significant increase in orders and even queued up for delivery. 01 Demand for steel is picking up   At ten o'clock in the evening, dozens of trucks were parked on bot... 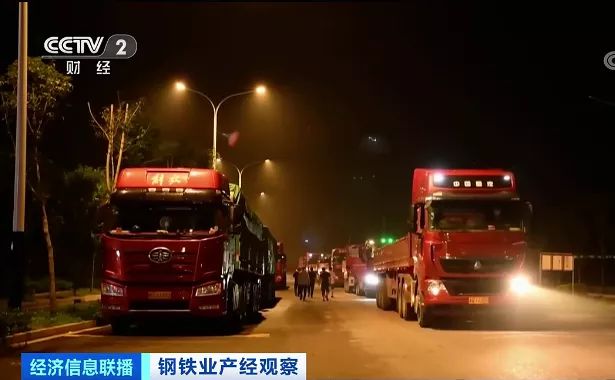 Since the beginning of this year, my country's steel market has been volatile. After the downturn in the first quarter, since the second quarter, demand has gradually recovered. In the recent period, some steel mills have seen a significant increase in orders and even queued up for delivery.

Demand for steel is picking up

At ten o'clock in the evening, dozens of trucks were parked on both sides of the road at the entrance of a steel factory in Laiwu District, Jinan City, Shandong Province. These trucks are waiting for stainless steel plates and hot-rolled coils produced in the last two days. A driver has been waiting for more than an hour.

According to Wang Yongsheng, chairman of Shandong Taishan Iron and Steel Group Co., Ltd., since this year, their enterprises have basically been in full capacity production. In March, the steel mill's inventory reached more than 200,000 tons, setting a new high in recent years. Starting in May and June, the national steel demand began to recover, and the steel inventory of their companies began to gradually digest.

Data show that in June, the national steel production was 115.85 million tons, an increase of 7.5% year-on-year; the apparent consumption of crude steel was 90.31 million tons, an increase of 8.6% year-on-year. From the perspective of the downstream steel industry, compared with the first quarter, the real estate construction area, automobile output, and ship output increased by 145.8%, 87.1%, and 55.9% respectively in the second quarter, which strongly supported the steel industry.

Yan Yijun, Marketing Director of Shandong Guanzhou Co., Ltd., said that the state's support for large-scale infrastructure projects, including new infrastructure (5G) projects, is gradually increasing, and investment is also increasing. Therefore, comparing the feedback in the first half of the year Not bad.

The rebound in demand has led to the recent rise in steel prices, especially high-end steel with higher added value, which has risen faster. Many downstream steel traders have not dared to stock up in large quantities, and adopted the strategy of fast in and out.

In the yard of a steel trader in Qingzhou, Shandong, the reporter saw that various specifications of special round steel were piled up. The person in charge told reporters that the special round steel they operate is mainly used in the field of construction machinery. In March and April this year, the price of this steel was only 3,500 yuan per ton, but recently it has risen to about 3,900 yuan/ton.

The reporter found in the survey that after the downturn in the first quarter, in the past two months, the prices of almost all steel products in the country have been on the rise, and high-end steel with higher added value has grown faster.

At present, in the national mainstream market, the price of rebar mainly used for construction is 3630 yuan/ton, which has risen by 230 yuan/ton from the low point in March and April this year; and it is widely used in home appliances, automobiles, machinery, The price of hot-rolled coils in the pressure vessel and other manufacturing industries is around 4,070 yuan/ton, which has increased by 860 yuan/ton from the previous low. The rise in prices driven by the rebound in demand also prevents most steel traders from hoarding large quantities of goods.

According to the monitoring of the China Iron and Steel Association, in late June, the social inventory of five commonly used steels (medium plate, cold rolled sheet, hot rolled sheet, wire rod and rebar) in the main steel market across the country was 12.16 million tons, a month-on-month decrease of 960,000 tons , A decrease of 7.3%. Analysts believe that with the end of the rainy season in southern my country and the arrival of the "Golden Nine and Silver Ten" traditional steel sales season, the social stock of steel will be further digested.

Bi Hongbing, senior analyst at Shandong Zhuochuang Information Steel, said that the entire steel market will be dominated by high-level consolidation in the second half of the year, especially now that the entire domestic demand is gradually picking up. Due to the overall pull of the gradual entry into the limited production season in November, prices are still A certain room for climbing exists.

Although demand and prices are rebounding, in fact, due to the huge increase in raw material prices, the overall profits of steel mills this year are still under pressure. Many steel companies have changed their product structure and demanded profits from high-end products. A reporter from Shandong Taishan Iron and Steel Group learned that this year, the price of raw material iron ore has risen sharply, and the recent price has even increased by more than 20% over the same period last year. This has also caused steel mills to increase sales but reduce profits.

Yan Yijun, marketing director of Shandong Guanzhou Co., Ltd., said that because there are more uncertain factors this year, the key strategy this year is to expand the domestic trade market and increase the development of the domestic trade market. Industry insiders told reporters that in recent years, with the transformation and upgrading of many industries including China’s manufacturing industry, the structure of China’s steel market has also been optimized. The market share of some high-end steels with high strength, high temperature resistance, high pressure resistance and radiation resistance is gradually increasing. . These high-end steels are gradually becoming the main source of profit for steel companies.