Nearly 30 provinces have clarified that the crude oil treasure incident will be accepted by the court, and investors are ushering in the dawn?

Chinanews Client Beijing, August 2 (Zhang Xu) The Bank of China Crude Oil Treasure incident finally made new progress. As of press time, the local courts of nearly 30 provinces have issued announcements that investors in "Yuanyuanbao" can sue in accordance with the relevant territorial principles.   "I will not accept the settlement, and will insist on safeguarding my legitimate interests by la... 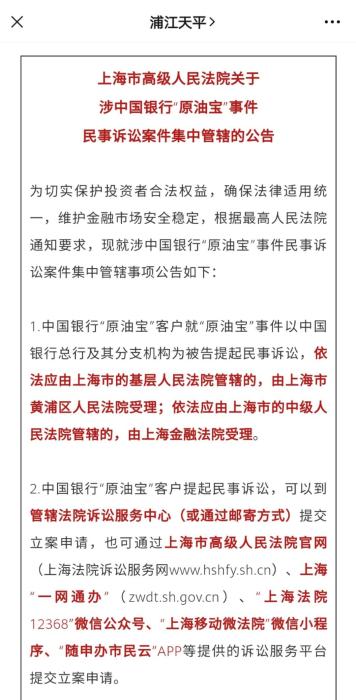 Chinanews Client Beijing, August 2 (Zhang Xu) The Bank of China Crude Oil Treasure incident finally made new progress. As of press time, the local courts of nearly 30 provinces have issued announcements that investors in "Yuanyuanbao" can sue in accordance with the relevant territorial principles.

"I will not accept the settlement, and will insist on safeguarding my legitimate interests by law." An investor from the "oil treasure" who has successfully filed the case told Chinanews.com that his attitude also represents the views of most of the investors.

On July 28, the Shanghai Higher People's Court issued an announcement on the centralized jurisdiction of civil litigation cases involving the Bank of China "Yuanbao" incident on the official public account "Pujiang Tianping".

The picture comes from the official WeChat account of the Shanghai High Court.

It is worth noting that the announcements of the high courts of most provinces show that jurisdiction is classified according to the amount of the litigation subject, and the announcement applies to the customers of the Bank of China "Yuanbao" within the province. The announcements issued by the Beijing and Shanghai Higher People's Courts did not mention the classification of jurisdiction based on the amount of litigation, and at the same time the scope of application is wider, as "Bank of China's crude oil treasure" customers.

Jiang Zhenxiang told Chinanews.com: "According to Article 23 of the Civil Procedure Law, a lawsuit brought due to a contract dispute shall be under the jurisdiction of the people's court at the place of the defendant's domicile or the place where the contract is performed. According to this provision, the dispute case of the'BOC Crude Oil Treasure' It is a contract dispute. If parties from other provinces list the head office of Bank of China as the first defendant, they can sue the court in Beijing."

"It is estimated that the designated court will have a special judge to hear the crude oil treasure case, and the final judgments may be consistent. In addition, from the report, the Supreme People's Court has unified coordination in the trial of crude oil treasure cases in various provinces. Yes, it is estimated that judges from various provinces will also organize some national meetings to unify judgment standards.” Wang Jianbiao judged.

An investor's lawsuit was accepted by the court

At present, more than three months have passed since the negative settlement price of the US WTI crude oil futures 2005 contract that occurred on April 20, and the settlement between some investors and the Bank of China is in a stalemate.

Judging from what Chinanews.com understands, investors' attitudes are also different. Among them, some investors whose losses are small or eager to reduce their losses have successively signed settlement agreements. The content of the agreement is that the Bank of China compensates 20% of the investor's principal, and the negative part is borne by the Bank of China.

In May, the relevant person in charge of the Bank of China revealed to the media that the bank’s reconciliation rate with customers has exceeded 80%, and it is reviewing product design, business strategy, risk management and other links and processes.

Two months have passed since May, and investors who did not reconcile at the time are still insisting. "The Bank of China has been persuading me to sign a settlement agreement in the past few months, saying that the compensation plan is the policy formulated above, and they can't be the master. I advocate full compensation. Even if full compensation is not possible, we must investigate clearly, otherwise this kind of thing may be possible in the future. Happened." Some investors said.

There are two main reasons why some investors are unwilling to settle: one is that after the incident, during the negotiations between Bank of China and investors, there were big shop bullying behaviors in some areas, which made investors disgusted; the other was the product design of "oil treasure" Accurate answers were not obtained in terms of compliance and risk control, and investors believed that there was a violation of the law.

Among the crude oil treasure investors, many people chose to file a lawsuit. In fact, long before the local High People's Court issued an announcement, investors had already successfully filed a case.

A notice of acceptance of the case issued by the investor. Photo courtesy of respondents

The Notice of Acceptance of the Case by the People’s Court of Chang’an District, Xi’an City, issued by the investor Mr. Wang, shows that the court has accepted the case of the investor’s financial entrusted wealth management contract dispute with Bank of China Co., Ltd. The date on the lower right corner is June 1, 2020. day.

Mr. Wang said that the process of filing the case went smoothly. He filed an application on June 1, and the court opened the case that day. "My total principal is 30,000 US dollars, and this part is totally lost. According to the announcement of the Bank of China, I still owe the bank hundreds of thousands. Because I cannot accept the attitude and behavior of the other party over the past three months, I will not accept the so-called In reconciliation, we will insist on safeguarding our own legitimate interests by law."

In the indictment, Mr. Wang believed that Bank of China had a variety of violations, including false propaganda, misleading investors to believe that crude oil treasure is a wealth management product; failure to fulfill the obligation of appropriateness and explanation, leading investors to purchase futures products with unlimited risks, etc. .

Due to the early filing of the case, Mr. Wang believes that his case will be the first batch of crude oil treasure litigation cases to be heard in the country. However, two months have passed and the local court has not given more reply except "waiting for notice".

As of press time, among the hundreds of investors, only Mr. Wang has successfully filed the case. Although the court has not yet opened, this is still an encouragement to others. "There was a case between the law firm and crude oil treasure. I was silent in the middle. I recently said that it is acceptable. I have met a few and haven't found a suitable lawyer, but it will continue." An investor said.

——A system failure caused a loss of 400,000 yuan for investors. Can the bank be exempted from liability?

On April 9th, Mr. Li of Handan, Hebei, was bearish of 750 barrels of crude oil at around 197.3-200 yuan. After the "Crude Oil Bao" transaction, the Bank of China system crashed and it was impossible to check whether the transaction was successful. The system showed that the margin was zero and the number of barrels held was zero. . Similar situations occurred twice, and Mr. Li lost more than 400,000 yuan in total.

The crude oil treasure system crashed and failed to log in. Photo courtesy of respondents

Bank of China Yongnian Sub-branch stated in a written reply, “After investigation, due to the recent huge fluctuations in crude oil prices that have not been encountered in decades, there was a special situation in which a large influx of customers saw an instantaneous surge in transaction volume. Customers may fail to log in for a certain period of time or transactions may not be successful due to large queues.” The Bank of China also stated that it is not responsible for losses caused by system risks and communication risks.

Mr. Li cannot accept this and is still seeking the court to file a case. There are more than one hundred investors who have suffered the same system crash as him.

Can the bank be exempted from the responsibility if the customer cannot trade due to system failure?

A few days ago, many domestic banks have issued notices to customers that they will suspend the trading of precious metals in their accounts. The reason is that the recent international platinum and palladium prices fluctuate frequently.

The Industrial and Commercial Bank of China stated that in order to protect the rights and interests of customers, starting from 0:00 on July 31, 2020 Beijing time, the bank will suspend the opening transactions of all products of account platinum, account palladium, and account precious metal index. Customers are requested to do so according to their holdings. Trading arrangements and risk control.

In addition, the opening of platinum and palladium positions in the accounts of Agricultural Bank of China, Bank of Communications, and Minsheng Bank were respectively suspended by pressing the pause button. Among them, the Agricultural Bank of China will stop the opening transaction service of platinum and palladium accounts from 8 a.m. Beijing time on August 10, 2020, and the closing transactions of customers holding positions will not be affected.

The Agricultural Bank said, “Affected by the spread of the new crown virus epidemic this year and the loosening of global monetary policy, the prices of platinum and palladium have fluctuated dramatically, market liquidity has significantly deteriorated, and transaction risks have increased.”

The fact that many banks suspended trading of precious metals in their accounts is generally believed by the market to be a lesson learned from the previous crude oil treasure incident. But in addition to market risks, some customers reported that they suffered losses due to banking system failures.

"On July 28, the two-way gold and silver trading system of China Merchants Bank collapsed. Around 11:30 in the morning and 3:30 to 4 in the afternoon, when precious metals were diving, the system did not respond to market quotations, deposits or inquiries about positions, and transactions were impossible. "Some investors said.

Regarding this type of situation, Wang Jianbiao said, “The court’s judgment standards are relatively strict. Investors must first prove that the inability to sell was caused by a system failure, and second, they must prove that they wanted to sell. If it is established, the loss can be claimed by the party that caused the system failure." (End) Business 2020-08-01T16:16:45.187Z
Nearly 30 provinces have clarified that the crude oil treasure incident will be accepted by the court, and investors are ushering in the dawn? 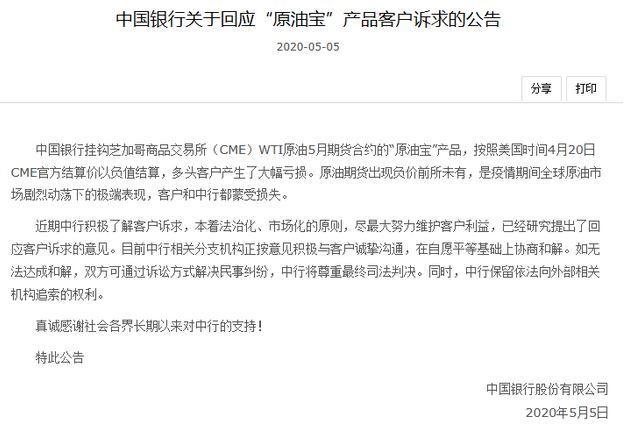 Business 2020-05-06T08:51:55.448Z
The process of financial globalization is accelerating, and risk awareness should keep up in time

Business 2020-05-07T14:33:15.370Z
How did the crude oil treasure settlement agreement control the risk spillover in the international market?

Business 2020-05-07T11:33:09.153Z
How did the crude oil treasure settlement agreement control the risk spillover in the international market? 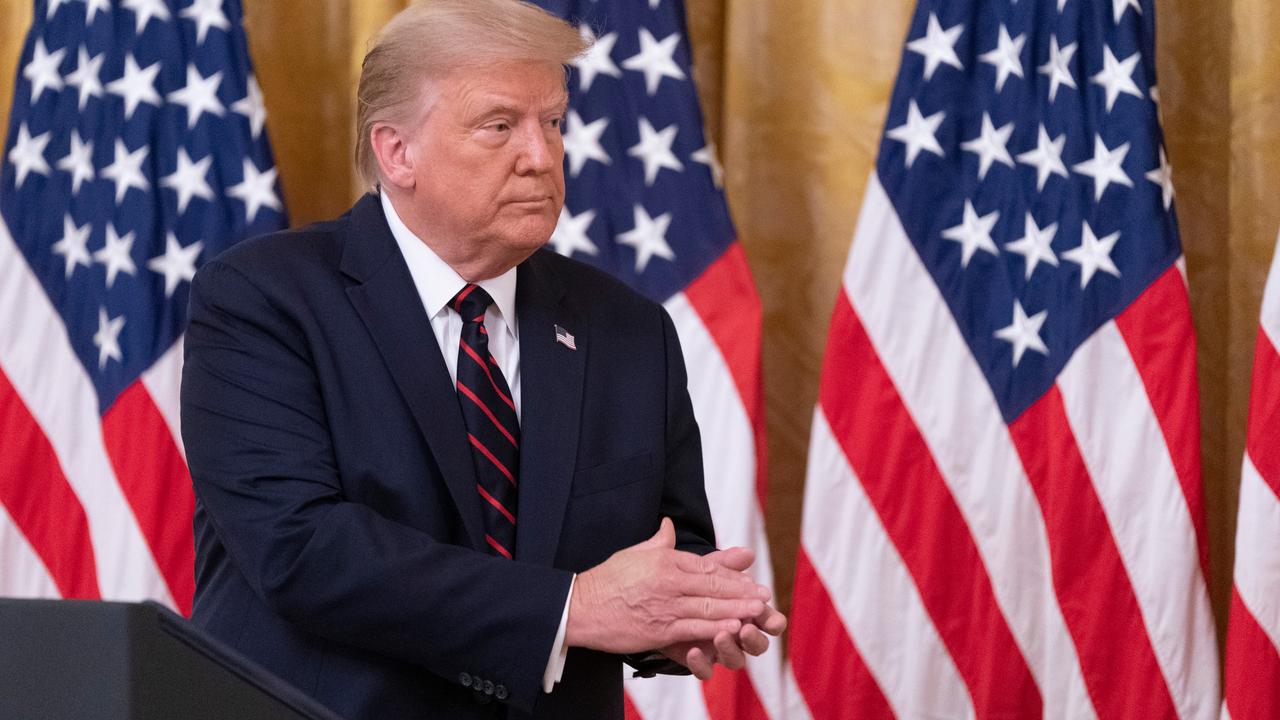