The OECD places Spain at the head of the global economic collapse in 2020 with a 14.4% drop after the virus

The Spanish economy is at the forefront of the global economic collapse this year according to new forecasts by the Organization for Economic Cooperation and Development (OECD). 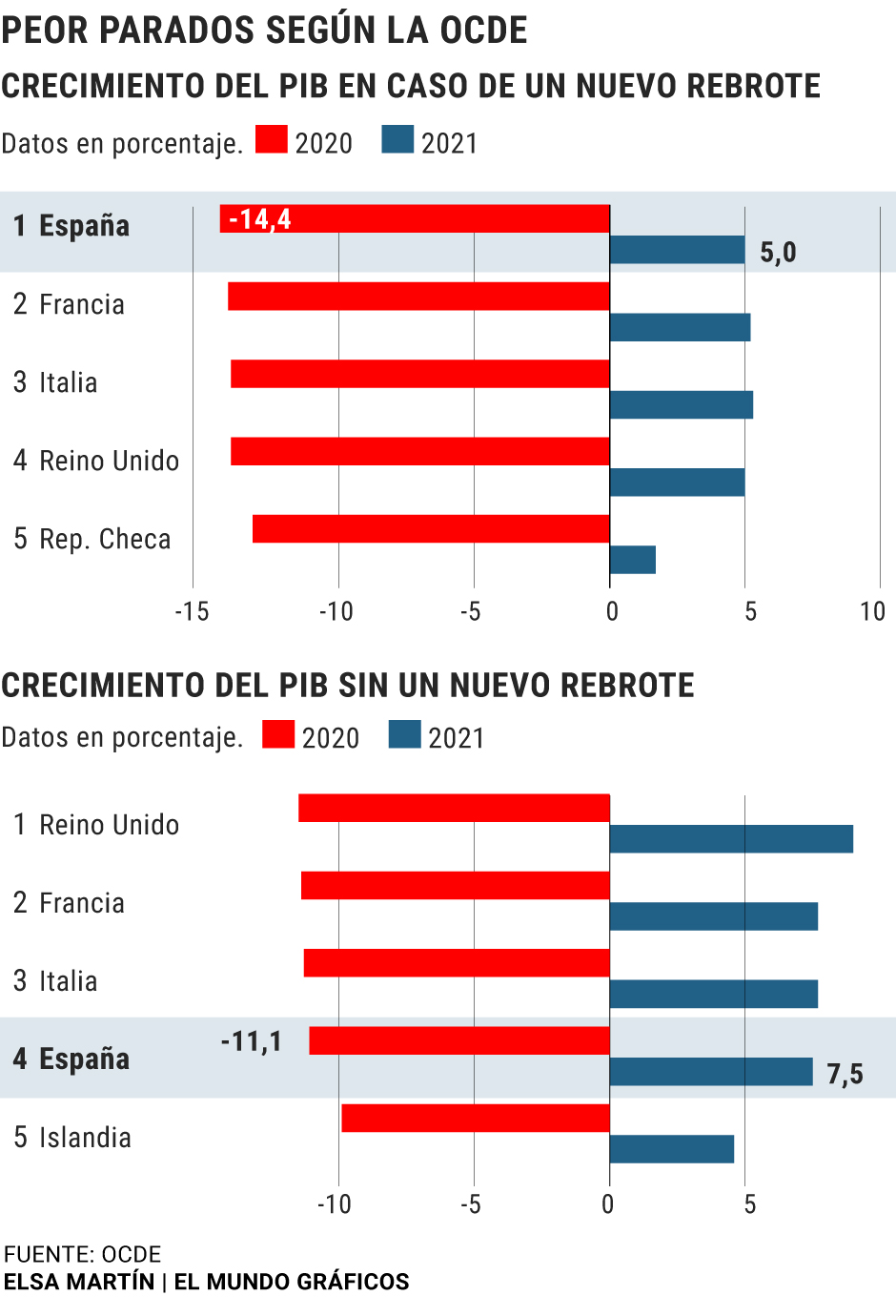 The Spanish economy is at the forefront of the global economic collapse this year according to new forecasts by the Organization for Economic Cooperation and Development (OECD). This international organization has developed two scenarios depending on whether there is a re-emergence of the coronavirus and in the most adverse the Spanish economy will fall by 14.4% in 2020, the largest of the industrialized countries , although very similar to the 14.1% forecast in France. and 14% in Italy.

"The problem we see in Spain is that highly affected sectors such as tourism and hospitality are especially important for its economy , which is why the data is worse than in other countries in the Eurozone," explains the person in charge of the study at the OECD. and former Portuguese minister Álvaro Pereira . The wide Spanish recession is due to the collapse of consumption due to the destruction of employment, according to the report, which does not augur a full rapid recovery, but a gradual one.

The Spanish crisis will be more acute than in the Eurozone average which, in the worst case, will fall 11.5% in 2020 and grow 3.5% in 2021. Also well above the world average that will be of fall of 7.6% this year and recovery of 2.5% next year; and the OECD (which includes the US, Canada, Mexico and other non-European countries) set at a recession of 9.3% and a rebound of 2.2%.

The forecast for Spain in all indicators is bleak and higher than the Bank of Spain's already tough one last Monday. Unemployment will reach 20.1% this year in the most adverse scenario without counting the so-called ERTE and worse still in 2021 where it will reach 21.9%. In this forecast, it even surpasses Greece and is at the head of the OECD's job destruction.

The OECD report commends the reaction of countries such as Spain to rapidly expand the Intensive Care Units, which mitigates the damage of a possible regrowth at the end of summer. "The capacity of the health system was lower than the OECD average before the crisis with fewer ICUs, but their number has more than doubled."

He also points out that the Government of Pedro Sánchez and Pablo Iglesias has taken "significant measures" to try to secure the employment and liquidity of the companies, but advises that it take new measures to extend the ERTE and guarantees and orient them more to the sectors more beaten. It recommends a temporary increase in public investment and a plan to relaunch tourism in collaboration with the private sector.

MacroeconomicsGerman GDP suffers the biggest drop since the 2009 financial crisis

Economy Bank of Spain: Portugal and Spain grew more than Italy after being rescued with conditions in the previous crisis

ExclusiveThe Government will give up to 1,015 euros a month to one million vulnerable families