Large-scale farming production capacity continues to be released: meat prices continue to fall after the market continues to rise

With continued favorable policies, the hog breeding industry has picked up significantly. The data shows that in the past 3 months, the national pig inventory has increased month-on-month, and the prices of pigs and pork have fallen for 14 consecutive weeks. Despite the continuous slow decline in hog prices, the profit level is still high. Experts believe that the supply and demand of pork in th... 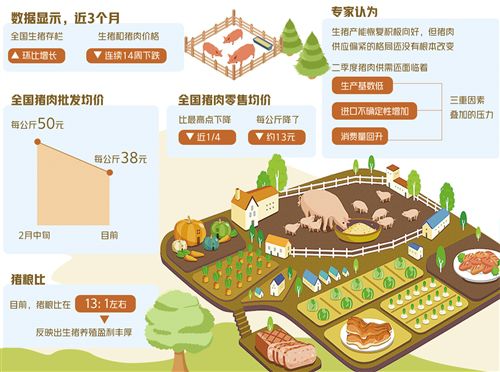 With continued favorable policies, the hog breeding industry has picked up significantly. The data shows that in the past 3 months, the national pig inventory has increased month-on-month, and the prices of pigs and pork have fallen for 14 consecutive weeks. Despite the continuous slow decline in hog prices, the profit level is still high. Experts believe that the supply and demand of pork in the second quarter are also facing the pressure of a combination of three factors: a low production base, increased import uncertainty and a rebound in consumption. As hog production resumes, the supply-demand relationship will gradually improve, and the price of pork in the future market will not increase significantly.

According to the latest data from the Ministry of Agriculture and Rural Affairs, the number of live pigs in the country has increased month-to-month in the past three months. The prices of live pigs and pork have fallen for 14 consecutive weeks, and the prices of pork in all 30 monitored provinces have declined. The national average wholesale pork price has dropped from a stage high of 50 yuan per kilogram in mid-February to 38 yuan per kilogram; the national average retail pork price has fallen by nearly a quarter from the highest point, and has dropped by about 13 yuan per kilogram.

After the rapid rise in pig prices, there has been a continuous and slow decline. What is the situation in the pig breeding industry? How to get the next pork market? The reporter interviewed relevant market players and industry experts.

Multiple factors push the price of pigs down

"It has been raising pigs for more than 10 years. I have never encountered such a profitable market in the past year." Huang Yu, a pig farmer in Jielin Village, Jianyang City, Sichuan Province, has four pig houses and sells more than 100 pigs annually. He told reporters that under normal circumstances, a pig earns 100 to 200 yuan, and often loses money. "Since the second half of last year, as long as you can prevent and control African swine fever and raise pigs for slaughter, you will make a profit. According to the market price at the high point, the net profit per kilogram is 20 yuan, and the profit per head is about 2600 yuan. The price of live pigs has continued to fall, but the profit per head is also nearly 1,300 yuan." Huang Yu said.

The reporter knows from all aspects that, due to the considerable profit of breeding, many farmers have a high enthusiasm for supplementing the fence and expanding production, which is the main reason for the recent decline in pig prices. The industry usually uses the ratio of pig food to food (ie the ratio of the market price of live pigs to the price of feed grain) to measure the profitability of pigs. In general, the cost price of 1 kg of pork is equivalent to the price of 6 kg of feed grain. The pig-to-food ratio is at a break-even point at 6:1. At present, the pig-to-food ratio is around 13:1, reflecting the lucrative profit of born pig breeding.

According to the monitoring of the Ministry of Agriculture and Rural Affairs, since October last year, the number of capable sows has stopped falling and has risen for 7 consecutive months, with a cumulative increase of 18.7%; the national pig population has also increased for 3 consecutive months. Judging from the situation in various regions, 28 provinces have kept growing sows. At present, the number of capable sows in Sichuan, Hunan, Henan and other traditional pig-raising provinces has increased sequentially for 4 months, 5 months and 7 months respectively.

The decline in pork prices is also closely related to the recovery of slaughter and processing and the release of reserve meat. As the order of production and marketing of live pigs gradually returned to normal, slaughter enterprises resumed full production and production, and the slaughtering of fat pigs in the early stage was accelerated. In addition to the release of reserve meat, the price of pigs continued to fall. So far, 5520 pig slaughtering enterprises across the country have resumed work. Among them, the annual slaughter volume of 2638 enterprises is over 20,000. A few days ago, another 30,000 tons of frozen pork was put into the central reserve. This was the 20th delivery this year, and the cumulative delivery volume reached 380,000 tons.

At present, there are about 160,000 households with more than 500 live pig farms that produce 52% of the country's pork. According to the monitoring of 160,000 households of pig farms by the Ministry of Agriculture and Rural Affairs, the number of newborn piglets increased for the first time in February this year, and the growth in March and April expanded. According to the calculation that the newborn piglets can be slaughtered within 6 months, this indicates that starting from July, the number of commercial pigs on the market will gradually increase.

Guangxi Yangxiang Co., Ltd. is a national leading agricultural enterprise mainly engaged in pig breeding. Zhang Conglin, president of the company’s pig business department, told reporters that the company can breed 100,000 sows per year. After African swine fever was introduced to China, the mother Pig inventory decreased by more than 10%. With the successive introduction of national measures to support live pig production, coupled with better live pig prices, the company has not only restored its original breeding scale, but also deployed some pig farms in provinces outside Guangxi. The total number of sows currently reaches 300,000.

"The problem of expanding the scale of live pigs is capital and land." Zhang Conglin said that the policy is good, the enthusiasm of large enterprises is very high, and the industry is picking up obviously. In the past, it was difficult and long to approve land for building pig farms, but now the materials are ready, it can be approved quickly.

Recently, the National Development and Reform Commission and the Ministry of Agriculture and Rural Affairs jointly issued the "Implementation Opinions on Supporting Private Enterprises to Develop Pig Production and Related Industries" to solve the problems of land use and credit faced by pig breeding. The document proposes to establish and improve the due diligence exemption and incentive and restraint mechanism for the hog industry loans of financial institutions. In addition, in response to the impact of the new coronary pneumonia epidemic on pig production, the central government expanded the scope of temporary loan discount subsidies from more than 5,000 farm households to more than 500 farms, reducing the financing costs of large-scale farm households.

Some large pig breeding enterprises choose to expand production scale. New Hope Liuhe Co., Ltd., a leading domestic pig farming company, announced on the evening of May 19 that it will increase investment in pig farming and plans to invest 1.834 billion yuan in the construction of 6 pig farming projects and acquire 420 million yuan 2 A company develops a pig business, and its subsidiaries plan to build a joint venture company that sells 1 million pigs a year. "In order to ensure the development of the pig business, we are prepared in terms of personnel and land." Yan Zhichun, Dean of the New Hope Pig Research Institute, said that the number of new recruits on the campus of New Hope Liuhe exceeded 5,000, a record high .

Tight supply will continue in the short term

Affected by the production cycle and the epidemic situation of African swine fever, my country's pork output fell to 54.04 million tons in 2018 and to 42.55 million tons in 2019. The "Three-Year Action Plan to Accelerate the Recovery and Development of Pig Production" puts forward that by the end of 2020, production capacity will basically return to normal levels. According to the current data and development trend, this goal is expected to be achieved.

"However, the basis for hog production recovery is not yet stable, and there are still some local support policies that have not been implemented in place, and some provinces have a large month-on-month increase in the number of sows." The swine warning expert team of the Agricultural Information Institute of the Chinese Academy of Agricultural Sciences Said that the African swine fever epidemic is the main risk that may reverse the recovery of live pig production. African swine fever is expected to have a stable epidemic situation, and farmers dare to boldly supplement the fence. Once the epidemic rebounds, the expected reversal will have an impact on the confidence of farmers.

In order to promote the prevention and control of African swine fever and maintain the normal order of production and marketing, the Ministry of Agriculture and Rural Affairs, the Ministry of Public Security and the Ministry of Transport have jointly launched a 100-day special campaign against illegal and illegal transfer of live pigs to stop the spread of the epidemic. All localities have also strengthened the management of filing pig transport vehicles, and it is strictly forbidden to transport pigs with undocumented vehicles. The three departments jointly reminded that all regions should focus on the entrance and exit of county highways and provincial borders and important hubs, weaving dense pigs transport supervision network. Strengthen the management of units and employees in the acquisition and trafficking of live pigs, use information-based means to strengthen dynamic management and control, and resolutely investigate and deal with problems found.

"Complete recovery of live pig production requires a process. From the perspective of the supply and demand of pork throughout the year, although the live pig production capacity has recovered positively, the pattern of tight pork supply has not fundamentally changed." Yang Zhenhai, director of the Animal and Veterinary Bureau of the Ministry of Agriculture and Rural Affairs, believes that Pork supply and demand also face pressure from a combination of three factors: a low production base, increased import uncertainty, and a rebound in consumption. After July, the market supply will gradually improve, but due to more festivals in the second half of the year, the consumption pull is also stronger, and the peak pork price may appear around September. In general, as the production of live pigs resumes, the relationship between supply and demand will gradually improve, and the price of pork in the future market will not increase significantly.

Business 2021-01-01T21:08:56.780Z
The recovery of live pig production exceeds expectations, and pork prices are expected to stabilize after a small increase 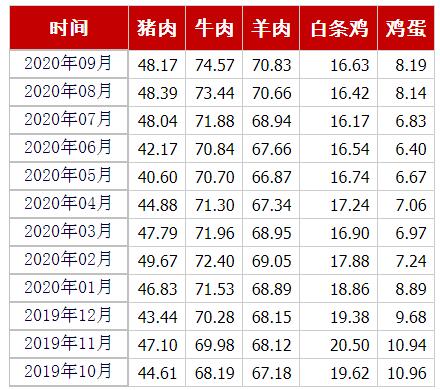 Business 2021-01-19T01:11:18.611Z
Podemos opens another front of tension in the Government by proposing intervention in the empty flats Business 2021-01-19T01:09:53.020Z
The three electrical disruptions after the rise in the price of electricity that you look at with a magnifying glass Competition 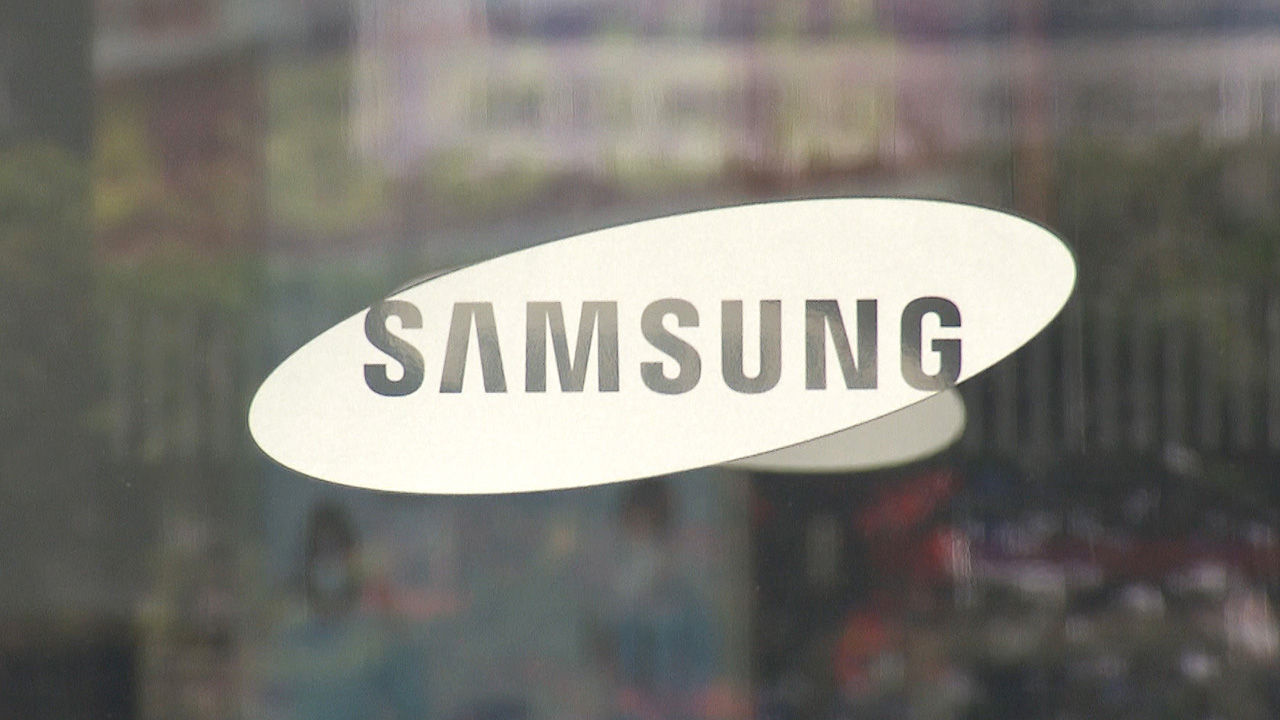