China and Singapore Jingwei Client on March 30th. On the 30th, the central bank announced that in order to maintain a reasonable and sufficient liquidity of the banking system, on March 30, 2020, the People's Bank of China launched a 50 billion yuan reverse repurchase operation by way of interest rate tendering. Previously, the central bank has suspended reverse repo operations for 29 consecutive business days.

On March 26, the central bank's monetary policy committee held its first quarter of 2020 regular meeting. The meeting pointed out that it is necessary to track changes in the world economic and financial situation, strengthen research and analysis of the international economic situation, strengthen international macroeconomic policy coordination, and focus on doing their own business. In order to innovate and improve macroeconomic regulation and control, prudent monetary policy should pay more attention to flexibility and moderation, and put support for the recovery and development of the real economy in a more prominent position. Use a variety of monetary policy tools to maintain reasonable and adequate liquidity and maintain overall price stability.

The meeting of the Political Bureau of the Central Committee of the Communist Party of China held on March 27 pointed out that it is necessary to strengthen the adjustment and implementation of macro policies, and to study and propose a package of macro policies and measures that are actively responded to. More flexible and appropriate, appropriately increase the fiscal deficit rate, issue special government bonds, increase the scale of local government special bonds, guide the decline in interest rates on the loan market, and maintain reasonable and sufficient liquidity. It is necessary to give full play to the leading role of financial policies such as re-loan re-discounting, loan deferred repayment of principal and interest, dredge the transmission mechanism, alleviate financing difficulties, and provide precise financial services for epidemic prevention and control, resumption of production and real economy development.

Cheng Shi, chief economist of ICBC International, said that on the one hand, the regulatory authorities have always maintained a reasonable and sufficient liquidity, which has provided effective guarantees for the stability of the real economy. On the other hand, with the loose monetary environment overseas and domestic inflationary pressures still remaining, China's monetary policy regulation has shown a certain force.

Jiang Chao, chief economist at Haitong Securities, said that “leading the interest rate down in the loan market” means that there is still room for downward LPR in the future, and “unblocking the transmission mechanism” also means that the downward financing cost cannot be solved by only reducing MLF, and commercial banks are also required. Reduce the excessive demand for short-term profit growth and make profits to the real economy.

Wen Bin, chief researcher of China Minsheng Bank, believes that it is necessary to comprehensively consider various factors such as epidemic prevention and control, economic development, inflation, and foreign shocks, and use various policy tools in a timely and appropriate manner to ensure the stable operation of the economy. Monetary policy should "give priority to me" while increasing policy flexibility. It is necessary to continue to use a combination of lowering standards, open market operations, and MLF to maintain reasonable and sufficient market liquidity, and guide market interest rates to decline steadily, especially to lower the government bond yield curve and drive corporate credit bond interest rates downward.

In addition, Wen Bin pointed out that it is necessary to continue to unblock the transmission mechanism of monetary policy, and it may become a time window for lowering the policy interest rate and the benchmark interest rate for deposits in mid-April. By releasing the potential of LPR reform, the cost of bank liabilities will be reduced, and the comprehensive financing cost of the real economy will be reduced; It is necessary to implement the special re-loan and re-discount policies that have been introduced, improve the accuracy of credit placement, and ensure that funds reach the required areas quickly and accurately. (Zhongxin Jingwei APP) 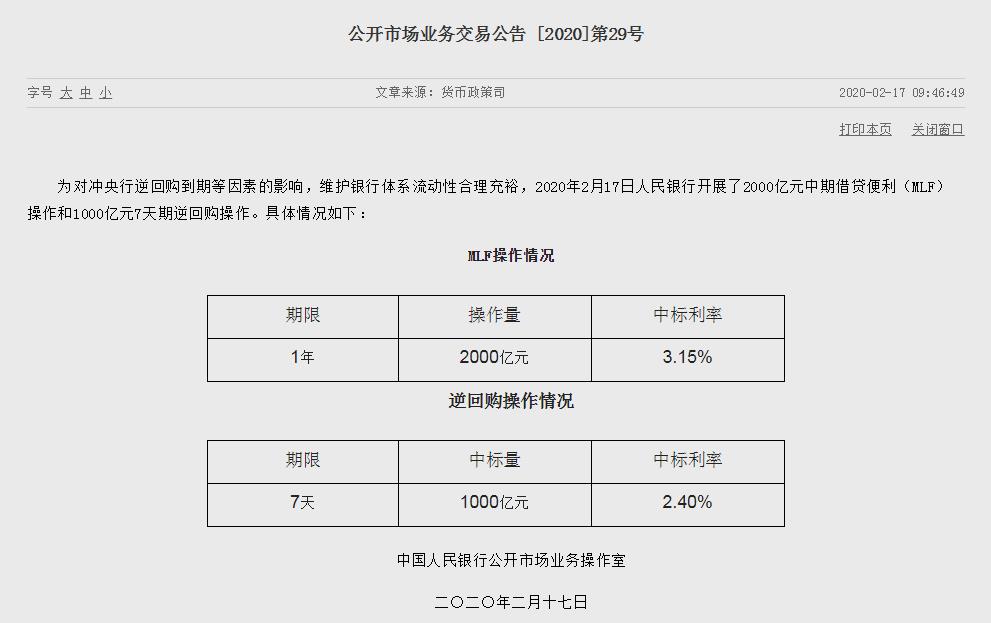 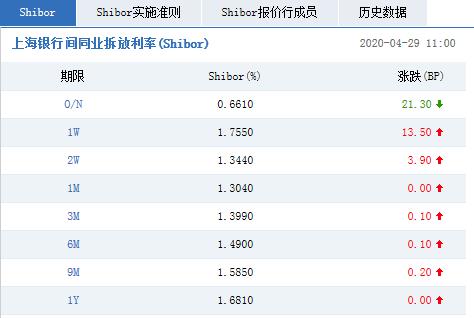 Business 2020-04-30T04:08:30.825Z
The central bank reversed the repurchase for 22 consecutive days to suspend experts: May "double drop" probability of landing 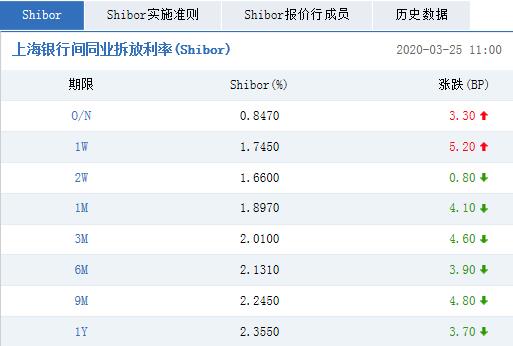 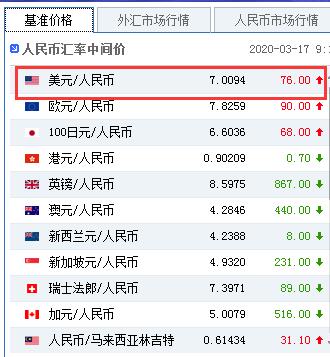 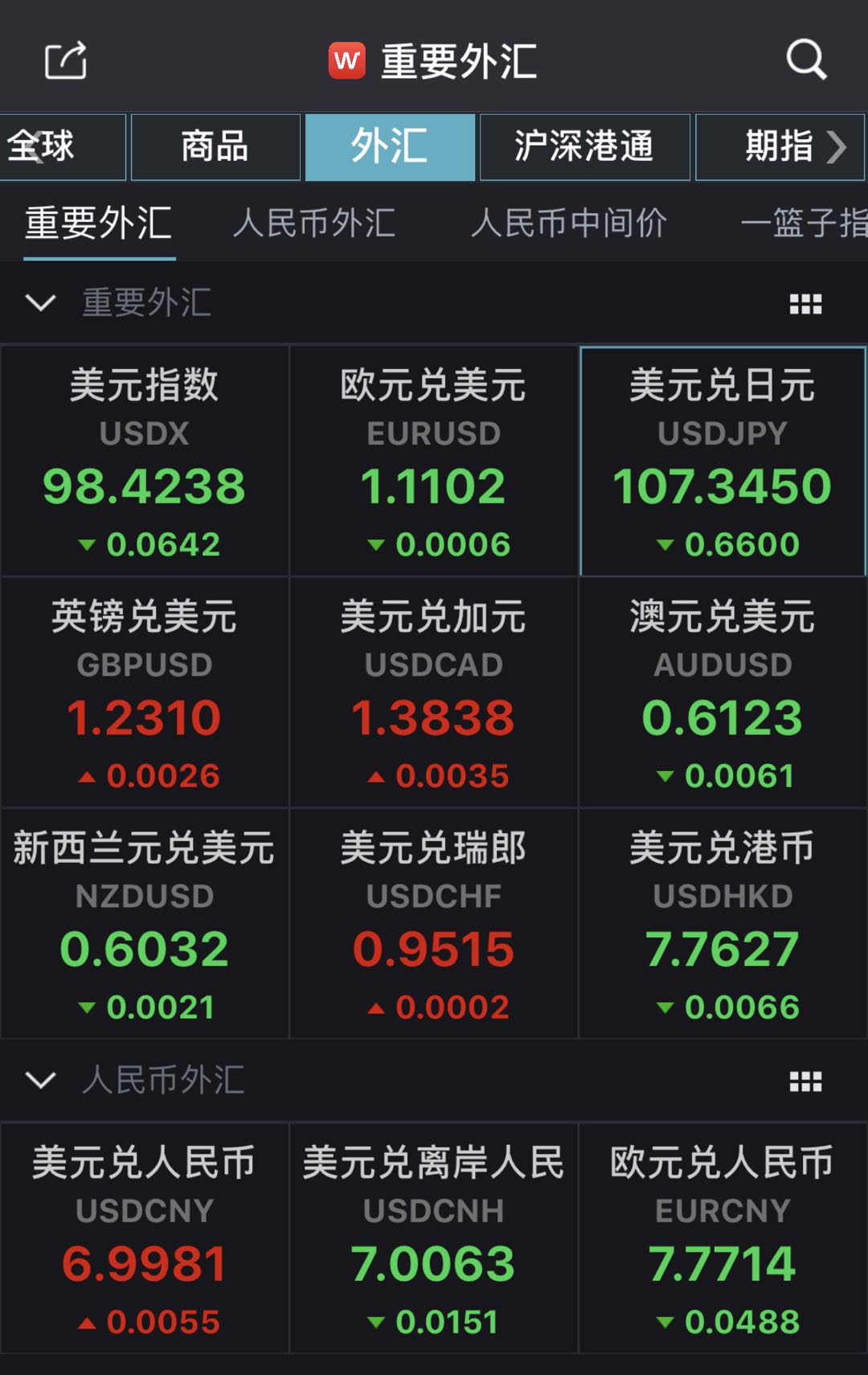 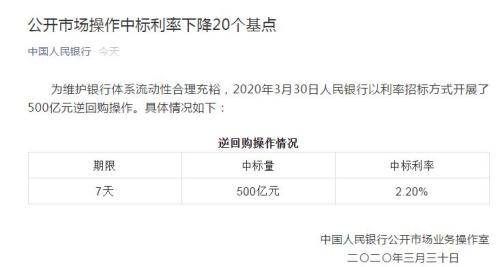