The city master plan for Seoul, which abolished the height regulation on the 35th floor of an apartment, which had been in effect for nearly 10 years, and flexibly reorganized the land use area system, passed the Urban Planning Committee’s deliberation. 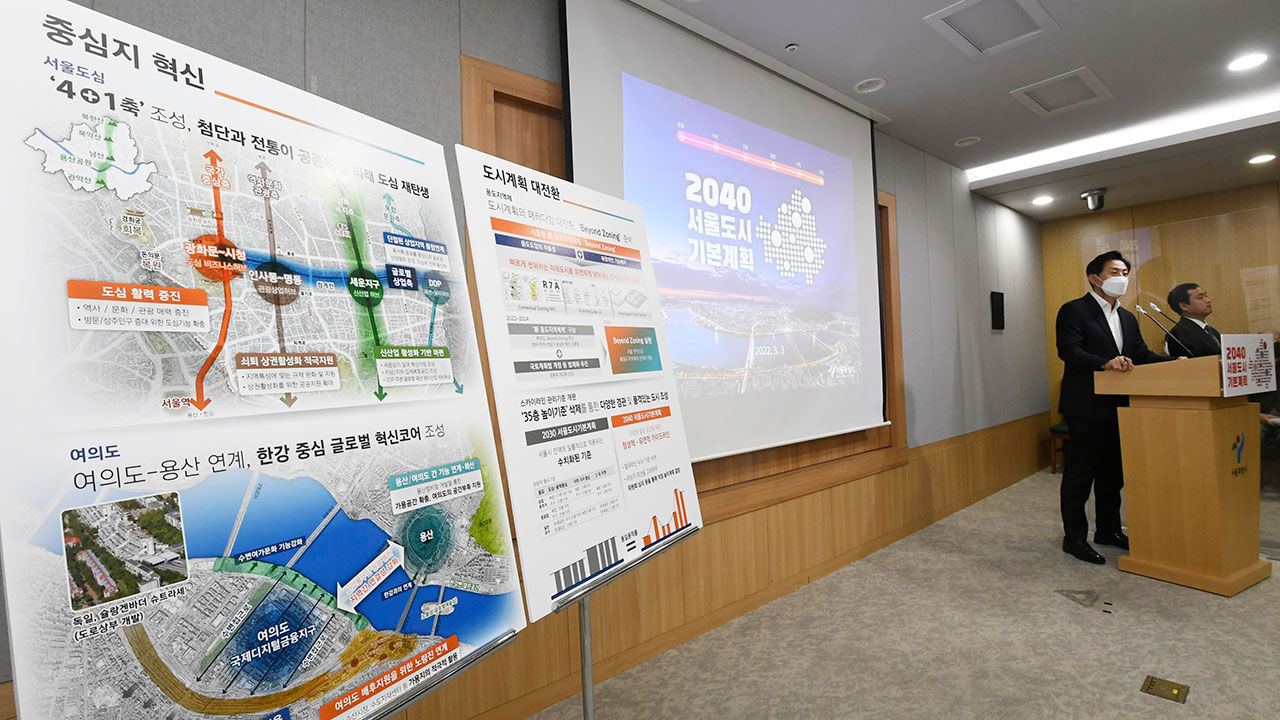 The city master plan for Seoul, which abolished the height regulation on the 35th floor of an apartment, which had been in effect for nearly 10 years, and flexibly reorganized the land use area system, passed the Urban Planning Committee’s deliberation.

The Seoul Urban Master Plan is the highest spatial plan that guides various plans to be promoted by the Seoul Metropolitan Government and is a statutory plan in accordance with the National Territory Planning Act.

It contains the future image of urban space that Seoul will pursue for the next 20 years.

Since the city first announced the plan in March, it has carried out related procedures such as public hearings, consultations with related institutions and departments, and listening to the opinions of the city council.

By passing the deliberation of the Urban Planning Committee yesterday, virtually all administrative procedures have been completed, and it is expected to be finalized and announced within the year through follow-up measures.

Looking at the details, the height standard specified in the previous 2030 Seoul Urban Plan, 'the height of residential buildings less than 35 stories', will be deleted.

It is a policy to induce a colorful skyline by allowing floor heights suitable for local conditions in the individual maintenance plan deliberation stage.

The regulation limiting the height of apartments adjacent to the Han River to 15 floors is maintained.

In addition, 'Beyond Zoning', a concept that completely overhauls the zoning system, which is the basic framework of urban planning, will be introduced.

When Beyond zoning is applied, flexible and complex development can be achieved by freely deciding which use to put in, regardless of the use of the land, such as residential, commercial, or park.

The plan also includes the introduction of the 'pedestrian daily zone', a space concept that includes jobs, leisure culture, and waterside green spaces within the pedestrian zone (within 30 minutes on foot), and the use of above-ground space by gradually converting the above-ground railway section underground. It is.

Cho Nam-joon, director of the City Planning Bureau of the Seoul Metropolitan Government, said, “If the 2040 plan is finalized, it will be possible to switch to a flexible urban planning system.” "he said.

The Urban and Residential Environment Reorganization Master Plan is a statutory plan at the city level that presents the basic direction of urban redevelopment-type redevelopment projects for commercial, semi-industrial and semi-residential areas.

The framework of the plan is ▲ complex functions of the center ▲ creation of a green city ▲ expansion of maintenance areas and easing of building regulations to realize a mixed city of direct ownership.

The downtown area re-designates the Dongdaemun area as an area scheduled for maintenance, and 11 areas outside the city center are designated as areas that can be renovated.

Floor area ratio incentives are given when a use to be fostered or promoted is introduced by region.

The burden rate by district, which has remained the same for about 40 years, is rearranged to suit current conditions.

The city center newly introduces the concept of 'open green space' that citizens can freely use among the above-ground parts of private land.

When carrying out a maintenance project, it is a principle that more than 30% of the site must be created as an open green area, but the existing height standard, which was rigid at 90m or less, is relaxed.

Floor area ratio and height incentives are also applied according to the creation of excess open spaces (public spaces open to the general public).

In addition, various types of urban housing such as apartment houses, officetels, urban living houses, co-living houses, and share houses are introduced in the city center while providing incentives such as permitted floor area ratio and easing of parking standards.

Yeo Jang-gwon, head of the Seoul Metropolitan Government's Balanced Development Headquarters, explained, "With this basic plan, we have prepared the means to implement major city policies, such as the 2040 Seoul Urban Basic Plan and the strategy for recreating the green ecological city center."

This city planning committee attracted attention as it was first open to the public in 64 years since its establishment in 1958.

The meeting was held in such a way that the city officials announced key contents through presentations, and the committee members gave their opinions and partially reflected them.

In relation to the 2040 plan, the committee members suggested that it is necessary to present objective evaluation indicators such as easing the housing burden index and increasing leading jobs.

Along with the opinion that social changes, such as population decline and super-aging, and transportation problems in wide-area governance should be reflected, it was also pointed out that more specific plans should be made to foster Yongsan as a national symbol base, including the creation of Yongsan Park.

Regarding the master plan for maintenance, there were suggestions from members that the content of green space maintenance and management should be specified and excessive incentives should be refrained from.

There was also an opinion against the 'Parking Lot Separation Sales System', which sells parking spaces separately when selling new apartments.