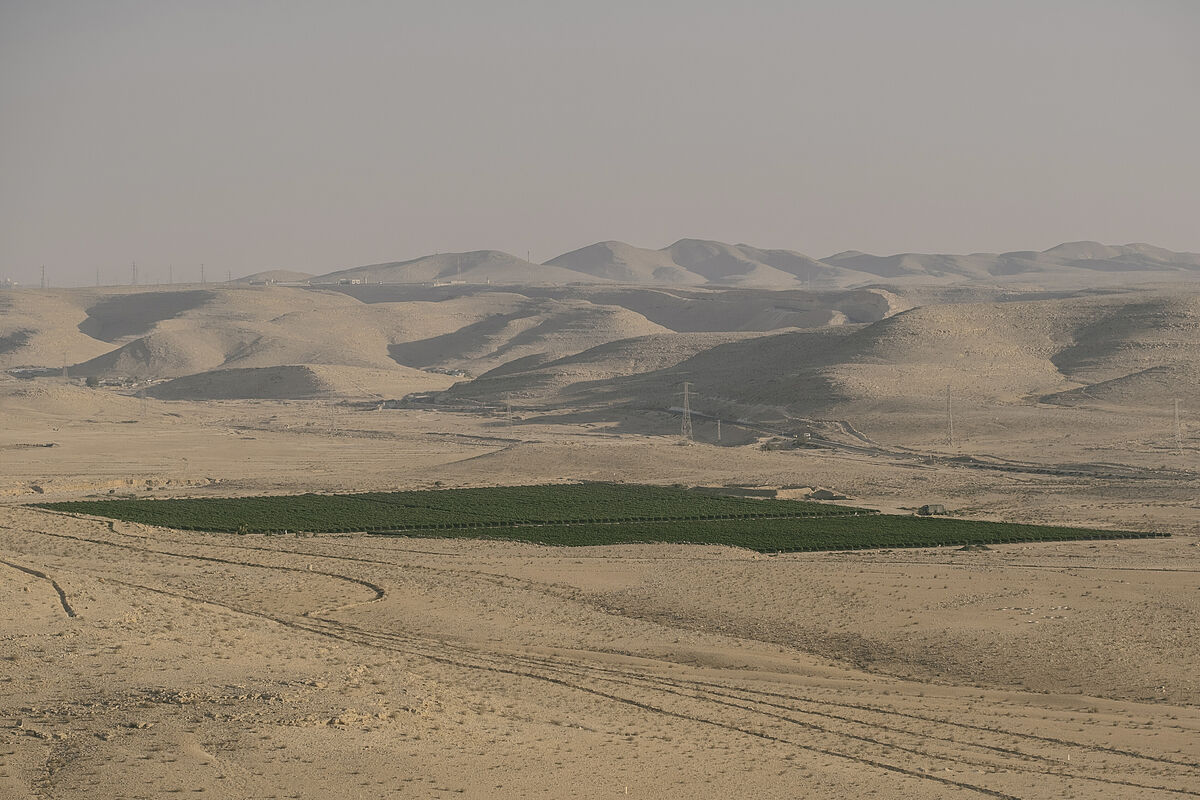 Even water desertifies, when it falls in torrents and drags, in its wake, the last flicker of life in the barren soils .

, and a lot, but it should not be forgotten that, like the rest of the elements on the previous list, it is also the work of human action.

Only the influence of man in this field explains why the rate of degradation is currently more than 30 times higher than the historical rate, according to a UN study.

Every year, the desert swallows 24,000 million tons of fertile soil, especially in

arid ecosystems, which represent 41% of the planet's surface

And the UN's own forecasts paint a bleak picture: by 2050, 1.5 million square kilometers of agricultural land will have been lost, the equivalent of all the arable land in India.

And those of the European Commission are no better:

to flee from the scarcity of food and water, as confirmed by its

"We are terrestrial animals, we live on land and practically all our food grows on the ground, be it animals or plants," warns Fernando Maestre, Professor of Ecology at the University of Alicante, internationally recognized for his research on arid ecosystems.

"If the soil degrades and loses the ability to support vegetation, natural ecosystems and productive crops, we lose everything,"

Maestre does not hesitate to warn that "we are degrading land by leaps and bounds because of how badly we treat it and it is something that is very difficult to recover."

Among the forms of this mistreatment, this expert lists the intensive irrigation agriculture that has dried up Doñana and is on the way to doing the same with the Tablas de Daimiel;

the erosion caused by floods, the exploitation of aquifers in greenhouses in Almeria...

Desertification poses a great danger to the human race, but

this is not another apocalyptic report

about how the increase in global temperature and the scarcity of water will overthrow our way of life, but quite the opposite: it talks about

what the will and human knowledge to contain or reverse the phenomenon.

Fernando Maestre himself has worked on research published by Nature Plants that has used artificial intelligence to measure the extent of the forests that still survive in the arid zones of the planet and predict their future evolution based on the climate of each zone in the past.

"Only in the province of Alicante, 40% of the forests could disappear before the end of this century,"

warns this expert, convinced that the predictions made by his study could be used to define in which areas the reforestation and which species are the most suitable in each case (trees, shrubs, herbaceous...).

“That 40% of forests we have to manage and prepare to try to conserve it.

"Science and innovation can and should have a key role in most cases and areas," says Noam Weisbrod, director of the Jacob Blaustein Institutes for Desert Research,

for agriculture and which has made the Jewish country a world leader in the field.

"We cannot change the climate of an area and our ability to control climate change and the droughts, floods, atmospheric instability and accelerated desertification that it entails is quite slow and limited," Weisbrod argues.

Israel is the clear example that it can be achieved.

Several decades of research have achieved authentic miracles in a country made up of 95% arid lands and in which, in fact, the Negev accounts for 60% of the national territory.

Weisbrod explains some of the techniques they have developed to make desert soil fertile.

scattered around the Negev , groves planted around micro-basins into which we channel the water from the floods;

And so, until sustaining a miraculous and lucrative viticultural activity in the area, as evidenced by the vineyard in the image that illustrates these lines.

Curiously, the aforementioned greenhouses in western Almeria have also developed irrigation optimization systems, but with a difference with respect to the example of the Hebrew country.

to take treated or desalinated water to where it is needed, while in Almería what they do is deplete the aquifers,” compares Irene de Bustamante, deputy director of the Imdea Agua Research Institute of the Community of Madrid.

In the opinion of this expert,

"the reuse of water is indeed the future of the human race,

together with desalination, since they allow increasing the availability of water despite climate change."

And the truth is that in both cases the focus is on innovation.

and, above all, it is expensive to transport it far from the coast, which reduces the profitability of crops.

On the other hand, promoting regeneration will require the development of increasingly efficient and cheap systems to

essential if it is to be reused in cultivation or for human consumption.

Quite a challenge, although in 2019, 93% of wastewater was treated in Israel and 86% was reused in agriculture.

Similarly, desalination provided 70% of water resources for domestic consumption and municipal use.

and promote solutions based on nature so that they are sustainable, circular and profitable... that is more useful than high-tech proposals," says De Bustamante.

The truth is that there are also initiatives that seek to

For example, from scientific approaches such as those listed next to this text and in which Spanish companies such as Agrow Analytics (AI to save water by optimizing where, when and how much to irrigate) or Aquaer (generators capable of extracting dew drops from air humidity).

We must not forget that

Spain is the European country most affected by desertification

, since 73.7% of its surface is arid, compared to the aforementioned 41% of the planet.

"Except for the Atlantic coast, the rest of the Iberian Peninsula falls under the umbrella of arid zones and we are heading towards scenarios of hydrological collapse in many regions," warns Maestre, who turns to

optimization of water in the Almerian plastic sea. It has not served to save water but rather to spend more on crops.

"In Spain, the photo of desertification is not the dunes, but those of the greenhouses, because it is a use of the land that is depleting resources in a clearly unsustainable way," describes this expert, who agrees with Irene De Bustamante in highlight a second paradox:

: prioritizing sustainability instead of market needs and the obsession with maximizing profits.