[Report file] '3.5 million won per month' is not enough subsidy... A shelter for abused children relying on a sense of duty

"I was hit with a shower a long time ago, but there's a little scar here." Elementary school student A, who showed the scar on her fingernail saying she was beaten by her mother. 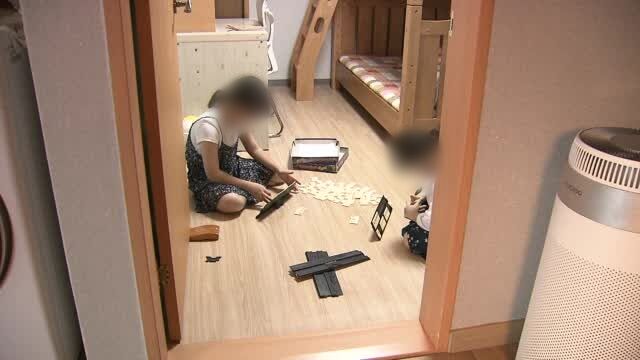 "I was hit with a shower a long time ago, but there's a little scar here."

Elementary school student A, who showed the scar on her fingernail saying she was beaten by her mother.

Miss A, who left the house after being assaulted several times by his mother, said that she went to a friend's house.

In the end, my friend's parents reported the parent's child abuse to the police, and I entered the shelter 8 months ago.

It was difficult to adjust in the beginning, but now life here is better than the daily life I used to spend with my parents.

I went to a shelter for abused children for two days from the 2nd and met the childcare teachers and children.

All the children gathered here are children who have been physically and mentally abused by their parents and have been judged to need separation.

The children who come to the shelter range from infants to high school students.

There are about 100 shelters across the country, and in the shelter I visited for two days, two elementary school students and one middle school student were staying.

The three nursery teachers work in shifts and look after the children.

The children whose hearts were hurt were healed here, and the teachers were spending each day with a sense of mission to raise children.

"Sometimes my dad is a good person, other times he's a devil."

Another victim I met that day, middle school student B, suffered from her father's domestic violence since elementary school.

It has been 4 months since I came from a shelter for abused children after going back and forth between youth shelters and temporary shelters due to multiple reports.

Miss B, who was kicked by her biological father and hit in the face with a fist.

His father even beat his mother, and it is said that police officers patrolled the house to such an extent that the screams spread around the house.

Miss B remembered her father as "sometimes a good person, other times a devilish person."

I don't want to go back to her dad who abused her mom too, but I miss her always hugging mom from time to time.

Ms. B said, "I want to hear her mother comfort me during her exams, so I miss her mom every now and then."

Children who are victims of abuse with different stories

The stories of the children who came to the shelter are all different.

Teachers say that children who come here usually show a lack of affection, and often have lost their minds.

Some children violently oppose teachers and spread delinquency to their peers in the shelter.

Nursery teacher C said, "There are children who tear wallpaper or harm themselves because they can't control their emotions, so it's especially difficult in that case."

Helping children who have been hurt by their parents.

The role of shelter teachers is that important, but support for them is insufficient.

Caring for up to 7 people alone...

The maximum capacity of the shelter is 7 people.

The number of people caring alone will increase to 7 people.

Teachers' duties range from laundry to cleaning, cooking, and childcare.

She is taking on various roles such as mother, guardian, and counselor.

The two daycare teachers I met for two days were all working tirelessly to cook, wash the dishes, do laundry, take care of the children's homework, and even provide counseling.

Even sleeping with the children is a job, and when infants and toddlers arrive, they sleep in the same bed.

Children sometimes enter early in the morning, so you can't relax even for a moment.

As the number of children increases, there is often not enough time to pay attention to their homework or to talk with them.

However, the salaries of childcare teachers remain at the minimum wage level.

Most of the non-metropolitan regions still do not receive overtime pay.

D, a childcare teacher who has been working at the shelter for 4 years, said, "At first, I was a little disappointed when I got the minimum wage.

A monthly subsidy of 3.5 million won for one shelter...

The shelter subsidy is also insufficient.

The subsidy for shelters for abuse victims is 40% from the national budget and 60% from local funds.

That is why subsidies by local governments are important, mainly, the further away from the metropolitan area, the less the subsidy.

For the shelter I visited, the support received from the government and local governments was only 3.5 million won per month.

Even if the number of children coming to the shelter increases, the subsidy is the same.

This cost includes everything from utility bills to clothes and meals.

This is because most of them cannot even bring their bags out because they are being abused and immediately taken to a shelter.

Children who come here live for at least one year and then either return to their original home or are transferred to a long-term care facility.

The admission fee is not too high as many children go through it.

Some regions also support admission fees, but this also varies from region to region.

In most cases, they do not receive basic living allowance.

As children become separated from their parents, they become recipients of the Basic Livelihood Recipient, because it is impossible to create an account for minors without parental consent.

The head of the shelter explained, "There are no cases where parents who abuse their children do not allow their children to open an account, so even the children who are currently there are not receiving about 500,000 won."

If the subsidy is insufficient, the teacher

3.5 million won is inevitably insufficient for the living expenses of up to 7 children.

If there is an additional cost, the teachers will come forward.

Most of the recently admitted children had rotten teeth, and the treatment cost more than 1 million won, so the head of the facility explained the child's situation to the hospital director and had no choice but to receive a discount.

When children want to go to a private academy after school, they contact the principal.

When even this becomes difficult, the facility manager's salary is deducted and used for living expenses.

This is because they want to receive donations freely, but since the shelter is a private facility, it is difficult to publicly request donations.

A nursery teacher who endures with a sense of duty...

In the end, the driving force behind childcare teachers at shelters for abused children is a sense of duty.

All the teachers I met over the two days said that they were working with the heart of mothers who care for children.

Childcare teacher D said, "In the process of providing food and washing clothes at every meal, children feel the love they did not receive at home and change.

However, in the working conditions of teachers who have to rely on insufficient subsidies and a sense of duty, the shelter is bound to groan.

It was urgently felt that the government should increase support for shelters even now and reduce regional differences.