Finding a Solution for Survival: Nobel Prize Winner on Prehistoric Viruses Due to Climate Change

As a result of the melting of glaciers, ancient viruses that are dangerous to humans can awaken. This was stated in an interview with RT by the Nobel laureate, professor from South Korea Rae Kwon Chung, who takes part in the all-Russian festival Nauka 0+. The climatologist noted that the melting of ice can also cause a decrease in the speed of the Gulf Stream, which will lead to a decrease in temperature on the Eurasian continent. According to him, in order to overcome the climate crisis, humanity needs to finalize the concept of a new climate economy. 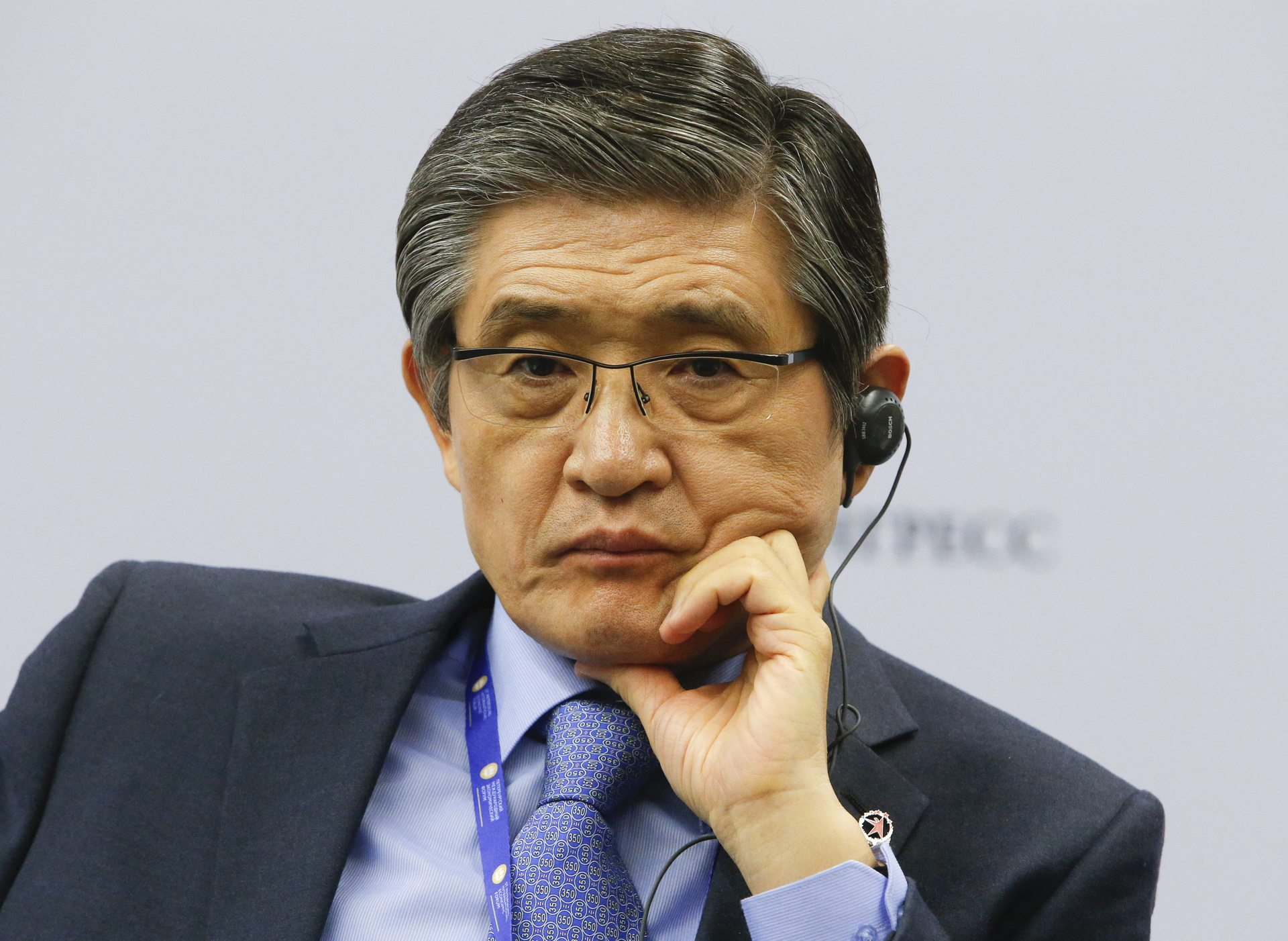 - In one of your interviews, you said that global warming could awaken the viruses that existed in the prehistoric era that are in the glaciers.

How dangerous are these viruses and can they lead to new epidemics?

- Viruses preserved frozen in the prehistoric ice of the tundra and icebergs of the polar region are released as a result of global warming - this is a scientific fact.

An outbreak of anthrax in the Yamalo-Nenets Autonomous Okrug in August 2016 occurred against the background of anomalous warming up to 35 ° C.

Similar outbreaks can occur in many other regions of Siberia.

But the real danger is the lack of information about the threat and risk of prehistoric viruses.

At the moment, we can only do everything possible to prevent their release and spread.

- How can humanity prepare for the fight against prehistoric viruses?

- We could not foresee the danger of the coronavirus and the COVID-19 pandemic.

It is equally difficult to make a known judgment about the impact of new viruses.

It may even go so far that such viruses will lead humanity to extinction.

The best thing now is not to prepare to fight new viruses, but to prevent the release of their prehistoric predecessors.

- According to scientists, further melting of the ice will cause the

to a decrease in rainfall in the tropical zone, which, in turn, will turn the forests of the Amazon into savannah.

What other consequences can massive melting of glaciers cause?

- Another example of a serious natural disaster caused by the melting of Arctic icebergs is the decrease in the speed of the Gulf Stream. This current carries heat from the vicinity of the Gulf of Mexico to the North Atlantic area. It is the Gulf Stream that gives continental Europe the weather that is so warm in comparison with that which is characteristic of the Manchu region located in the same latitudes. If this natural "conveyor", delivering the warmth of the tropical zone of the Gulf of Mexico to Europe, slows down or stops, then the temperature in Europe will drop sharply, and this, in turn, will shake the foundation of European civilization. This is one of the impending dangers that threaten Europe, including the western part of Russia, including, for example, St. Petersburg.

- At the Eastern Economic Forum, you noted that the Paris Climate Agreement, adopted in 2015, is aimed only at industrial carbon dioxide emissions and does not take into account consumer ones.

How can consumer emissions affect climate change on the planet?

- Targets for carbon emissions, which are specified in the Paris Agreement on climate, and those proclaimed by the countries of the world, including the USA, European countries, China, South Korea, are calculated on the basis of emissions associated with the production of goods and services in each country.

The formula for calculating carbon emissions based on production metrics such as GDP is misleading and is not actually helping to reduce global CO₂ emissions.

This 40% is based on emissions from production in the United Kingdom.

But if we take into account the CO₂ emissions associated with the production of goods that were imported into the country for domestic consumption, then the real reduction over the same thirty-year period is only about 19%.

A large part of the reduction in carbon dioxide emissions in Europe is just a consequence of the restructuring of European industry: its transfer from production rails to the sphere of knowledge and services by moving carbon-intensive production to China and many other developing countries.

This European model is problematic because many countries around the world are unable to reproduce this approach.

Therefore, if we seriously intend to achieve a global reduction in carbon emissions, it is necessary to change the methodology for their assessment: instead of production indicators, use consumption parameters as the basis for these calculations.

The fact is that the global reduction of carbon emissions is achievable only by reducing final consumption.

But reducing final consumption is not an easy task.

Taking it is to touch the very foundation of capitalism, which works by increasing consumption, like a bicycle that threatens to tip over, as soon as the pedaling is slowed down.

The central question in reducing consumption-related emissions is whether we can keep capitalism afloat if we consume less.

The dilemma is this: should we continue to increase consumption rates to the detriment of climate security, or lower them in order to maintain climate stability at the expense of prolonged economic growth?

The solution that we should choose is not related to these two options, subject to the logic of a zero-sum game (a type of game in which the amount of gain of one side is equal to the amount of loss of the other. -

Better to work towards a win-win, positive-sum game instead of a zero-sum game between capitalism and climate security.

In other words, we must shift to a new paradigm of balance between climate and economy, in which the pursuit of carbon-free or less carbon-intensive consumption can be the engine of economic growth and create jobs.

Currently, green growth is being promoted by many international organizations, including the OECD and the World Bank, the Global Green Growth Institute, as well as countries such as Denmark and South Korea, which have become leading participants in the P4G (Partnering for Green Growth and the Global Goals) initiative. green growth and achievement of global goals ").

There is still a lot to be done to make green growth a working paradigm, and for governments and businesses to take this approach as a basis.

To save humanity from the climate crisis and achieve economic growth based on sustainable consumption patterns, it is necessary to continue to refine the concept of a new climate economy.

- Many researchers believe that it is the human factor that has become the main cause of climate change.

The rapid development of industry, an increase in the number of cars, and emissions of carbon dioxide into the atmosphere increase the natural greenhouse effect.

After all, the world's oceans produce the largest amount of carbon dioxide emissions into the atmosphere.

- Yes, the IPCC (Intergovernmental Panel on Climate Change) has exhaustively confirmed that climate change is the result of human intervention. The oceans are a huge reservoir of CO₂: it absorbs more carbon dioxide than it releases. Scientists have already adjusted their climate change projections to account for the ocean's carbon cycle. Despite the sequestration of carbon by the ocean, the concentration of CO₂ in the atmosphere is increasing with the increase in carbon emissions associated with the use of fossil fuels by humans.

- On September 16, 1987, the Montreal Protocol was signed - a document in which countries agreed to abandon the industrial use of substances that deplete the ozone layer. At that time, ozone holes became the first global environmental problem that was in the center of attention of the world community. Why is this topic not relevant now, have the ozone holes really disappeared by themselves? Maybe the problem of climate change will also disappear?

- Yes, in the 1980s, ozone holes were an important environmental problem.

Thanks to the Montreal Protocol's controls on ozone-depleting substances such as freon gas, the ozone layer has been restored and ozone holes have become smaller.

And this did not happen naturally, but due to huge international efforts to reduce the use of freon.

This is the reason for the restoration of the ozone layer.

Climate change will not end on its own.

We must find a solution for our own survival.