Make a specimen of a large right whale of '12.6m' high on the 4th floor of an apartment.

The Jeju Folklore &amp; Natural History Museum announced today that it will take out the bones of the right whale that were temporarily buried in the museum's vacant lot in January last year in accordance with the preservation and exhibition plan for the endangered right whale. 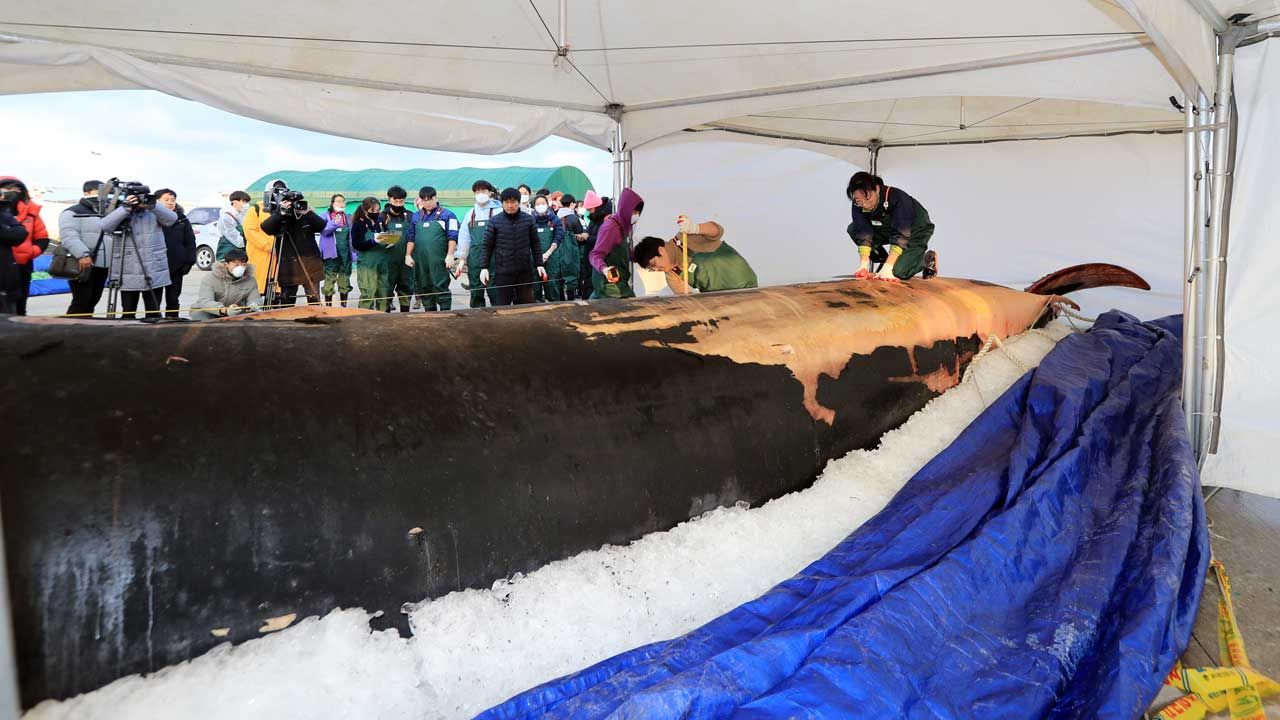 ▲ On January 3, last year, an autopsy is underway on a right whale on the 4th floor of an apartment, found on the waters of Biyangdo, Hallim-eup, Jeju-si

The four-story right whale in the apartment appears in the ground after a year and two months, and it is produced as a real specimen.

The Jeju Folklore and Natural History Museum announced today (8th) that it will take out the bones of the right whale that were temporarily buried in the museum vacant space in January last year in accordance with the conservation and exhibition plan for the endangered right whale.

The whale, which is 12.6 meters long and weighs about 12 tons, was discovered on the afternoon of December 22, 2019, in the sea 40 km northwest of Hallim Port in Jeju City.

On January 3 of last year, an autopsy was performed at Hallim Port in Jeju City.

The autopsy of a large whale over 10m is the first case in Korea.

It is believed to have died after falling away from its mother as a baby that had just been weaned.

On the 9th of the same month, the museum buried this right whale bone, which had been autopsied, in an empty lot behind the lab.

During the autopsy process, the flesh was cut out and the organs were removed, but there was a lot of oil left in and out of the bones, so it was necessary to remove them.

The size of a whale is so large that it is known that only 14 tons of sand was used to bury whales in the ground at the time.

The museum plans to re-excavate the bones of this right whale as early as the end of this month and transfer it to the land through a specialized company to make a sample.

Right whale bones undergo degreasing and bleaching to completely remove the oil from the bones during the sample making process.

Estimated lead time is from 1 year 4 months to 1 year 6 months.

The right whales after sample production are returned to Jeju and reassembled to be displayed in the Provincial Folklore & Natural History Museum.

Go Chang-sik, a researcher at the Folklore & Natural History Museum, said, "From next October, visitors will be able to meet the bones of a right whale."

Right whales are large mammals with the second largest body size on the planet, after the great king whale.