An electric scooter to get around the training camp, walkie-talkie, giant screens during training, and finally a live broadcast on the “Twitch” platform: this is how technology-savvy coach Luis Enrique revolutionized Spain’s approach to the Qatar 2022 World Cup. These are Enrique’s latest ideas: During the World Cup 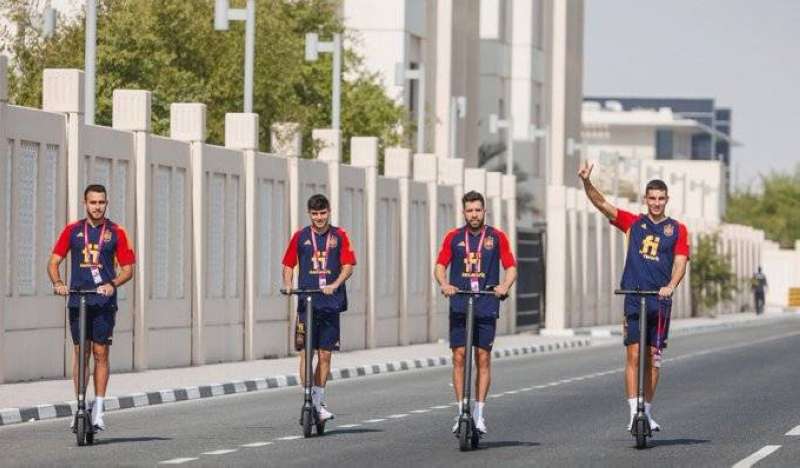 An electric scooter to get around the training camp, walkie-talkies, giant screens during the exercises, and finally a live broadcast on the “Twitch” platform: this is how technology-savvy coach Luis Enrique revolutionized Spain’s approach to the Qatar 2022 World Cup.

These are Enrique's latest thoughts: during the World Cup, "every evening, except on match days," the Spanish coach appears at around eight o'clock in the evening to speak live with hundreds of thousands of fans and some of his players on the Twitch platform, which is especially used by fans of video games and sports competitions. e.

During his first appearance on the podium on November 18, he was watched by nearly 150,000 people, from the small office he set up in his room at Qatar University in Doha, where Spain's training camp during the World Cup.

"I am excited to tell you things as they are, the whole truth without any prior arrangement," the 52-year-old said at the time.

It is a new way to communicate with the public, after the methods he tested with his players, "an idea whose goal is simply to build a direct relationship with fans interested in obtaining information about the national team," which swept Costa Rica with a historic 7-0 in its first match in the World Cup on Wednesday.

- Scooter and scaffold - Since his first steps as a coach at Celta de Vigo, Enrique has never stopped innovating.

In 2013, when he reached the head of the coaching staff of the Spanish club, he used a small scaffold to be able to continue training from a specific height.

His former assistant Robert Moreno said in an interview with "Mundo Deportivo": "He thought it was easier to communicate with his players in this way."

Lucho moved this machine upon his return to the national team in 2019, and it was even installed at the Qatar University training ground.

At the camp, the coach, players and members of the coaching staff use electric scooters to move around and access group training sessions.

“It is an easy, comfortable and enjoyable means of transportation,” the former Barcelona coach said during his appearance on “Twitch” on Saturday.

In last year's Euros, there were not enough numbers, so we asked for one for everyone »this time.

During training, La Roja players wear aprons with an information storage system on the back, as in most of the world's top clubs, which allow tracking of their physical activity...but also small speakers, which are connected to Enrique's walkie-talkie.

The trainer introduced the technique in September, so he can give them individual or group instructions, without shouting from his scaffolding.

One of the devices that players will not find in Doha is the 6x3 meter screen that Enrique installed last March in Las Rosas (north of Madrid) in the training center of the 2010 world champions.

He uses a giant screen to give his players real-time tactical instructions or to show how the drills they have applied in matches.

In a video released by the Spanish Football Federation, Enrique is shown directing the positioning of his attackers based on footage from a match broadcast in parallel on the screen.

"The national team is where we notice that technology is applied more in training," said Eric Garcia, defender of "La Roja" and Barcelona, ​​\u200b\u200bin September.

And he continued, “Everything is developing very quickly, technology is advancing, and it is also entering football.

But these are effective things.”

Another device that players in Qatar have been denied is the hyperbaric chamber: a cell with pressure higher than atmospheric pressure, which allows for better oxygenation of muscle tissue and faster wound healing.

Spain hopes that all this technology will serve it to disrupt the German machines when the two teams face off Sunday in Group E.