“People tried to escape”: in Indonesia, at least 125 people were killed in a stampede after a football match

At least 125 people were killed and more than 180 were injured during riots after a football match between Arema and Persebaia in Malang. Fans rushed to the field, left dissatisfied with the defeat of their team. To stop the fans, the police used tear gas. This caused panic and stampede. Indonesian President Joko Widodo has ordered the suspension of the championship while the tragedy is being investigated, and FIFA is now questioning whether to host the country's youth world championship (U20). 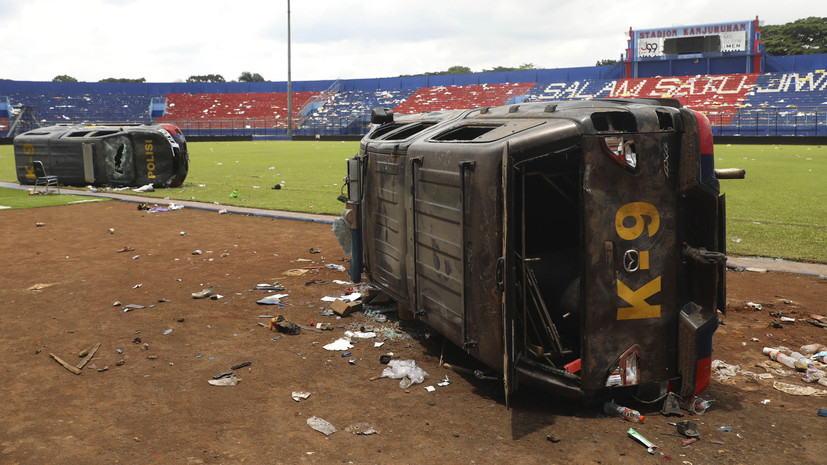 A real tragedy occurred in Indonesia after the match of the 11th round of the national football championship between Arema and Persebaia.

The meeting was held at the Kanjurukhan stadium in the city of Malang.

The hosts lost with a score of 2:3 and angry fans immediately after the final whistle rushed onto the field to demand explanations from the players for such a game and for a bad start in general.

The team that became Superleague champion in 2009 currently occupies only ninth place in the standings.

The football players were quickly taken to a room under the stands, and law enforcement officers tried to restrain the fans.

According to him, about three thousand people ran out onto the lawn, they attacked the police.

To contain the crowd and stop the riots, law enforcement officers used tear gas, which FIFA forbids the use inside stadiums.

This led to panic.

People rushed to the exits from the stadium, and a stampede began.

Many fell due to bouts of suffocation.

As a result, according to official figures, at least 125 people died.

Officials previously called the number 174, but revised it Sunday evening.

It is noted that the same people were counted several times.

Among the deceased was a five-year-old child.

One eyewitness named Joshua, who watched the match from a VIP podium, blamed the police for the tragedy.

According to him, the victims could have been avoided if the law enforcement officers had not used gas.

Moreover, they threw grenades for an hour.

“People were panicking and the only choice they had was to get out through the exits or seek shelter on the field.

That's why so many went down to the lawn.

In fact, they were trying to escape ... When I close my eyes, I still hear cries for help.

I don't want to be a football fan anymore.

I don't want to follow any football match of Indonesian teams anymore.

I hope that football will be abolished in Indonesia,” Joshua added.

About 180 more fans are currently in the hospitals closest to the stadium with injuries of varying severity.

There are fractures, craniocerebral injuries, as well as damage to the respiratory tract.

At the same time, the actions of the police did not give the proper effect: the riots from the stadium spread to the streets of the city.

And as a result, several dozen more cars were damaged.

Indonesian President Joko Widodo ordered the championship to be suspended while the tragedy is being investigated and instructed to carefully assess the safety of the matches, expressing the hope that this would be "the last football tragedy" in the country.

At the same time, as reported on social networks by the Coordinating Minister for Politics, Law and Security of Indonesia Mohammad Mahfud, with a declared capacity of 38 thousand people, 42 thousand spectators were present at the stadium.

And this could also be one of the reasons for what happened.

The head of the Asian Football Confederation, Sheikh Salman bin Ibrahim Al-Khalifa, said in a statement that he was "deeply shocked and saddened by such tragic news from Indonesia, which reveres football."

In turn, FIFA has already requested a report on the incident, and the president of the organization, Gianni Infantino, expressed his condolences to the families and friends of the victims.

“The football world is in a state of shock after the tragic events that took place in Indonesia after the match between Arema and Persebaia Surabaya at Kanjuruhan Stadium.

This is a dark day for everyone associated with football, and a tragedy beyond comprehension, ”the FIFA official website quoted Infantino as saying.

In addition, the organization thought about the feasibility of hosting the World Under-20 Football Championship in Indonesia, which is to be held next year.

The country also claims to host the Asian Cup.

The tragedy in Malanga was the second largest number of victims at a football match in history after the events in Lima in 1964, when during the qualifying match for the Olympics between Peru and Argentina, 328 people died and thousands were injured as a result of a stampede and riots.