One of a kind: how the Soviet gymnast Shcherbo won six gold medals at one Olympics

30 years ago, the legendary Soviet gymnast Vitaly Shcherbo won six gold medals at the 1992 Olympic Games in Barcelona. A native of Minsk, he took a place on the highest step of the podium in the team tournament, all-around, as well as on individual apparatus: pommel horse, rings, vault and uneven bars. Since then, no representative of his sport has managed to surpass this record. 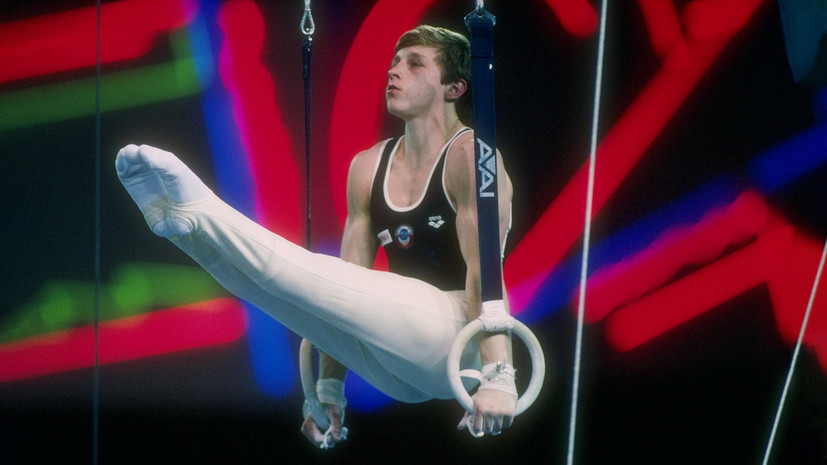 30 years ago, the legendary performance of the Soviet gymnast Vitaly Shcherbo at the Olympics in Barcelona took place.

A native of Minsk won six gold medals in Spain - neither before nor after him in gymnastics could anyone do it.

Only two people in history have managed to win more victories in one Games - American swimmers Mark Spitz, who won seven gold medals in Munich 1972, and Michael Phelps, who climbed to the top step of the podium eight times in Beijing 2008.

Six-year-old Vitaly was brought to gymnastics by his mother.

And although she herself was engaged in acrobatics at one time, she did not build big plans for her son's sports future.

In his own words, until the age of 15 he was "pretty round" and even bore the nickname Donut.

“Mom worked from morning to evening, father was not there.

So that I wouldn’t wander around on the street, I sent me to play sports ... Yes, I was plump, but frisky, I loved rivalry, push-ups, pull-ups.

When children are selected for sports sections, they usually watch how they perform physical exercises.

I did it, so the coach took me.

But, to be honest, I didn’t have any hopes, ”Shcherbo said in an interview.

However, already at the age of 11, Vitaly fulfilled the standard of a master of sports, and at 17, as an exception, he ended up in the USSR national team.

The decision on this was made personally by the head coach Leonid Arkaev.

) I went as a substitute for the World Championships in Stuttgart.

At the testing of shells, Arkaev seemed to accidentally let me out onto the platform.

And on freestyle I have two blanks with two screws, which no one in the world has even tried to do close, the jump is unique.

The people, of course, came running: “Who is this?”

And Arkaev so casually: "Yes, this is our spare."

He, of course, has always been the greatest psychologist, ”Shcherbo shared in an interview with Sport-Express.

Two years later, yesterday's understudy became a full-fledged member of the national team and the winner of the 1991 World Cup in the team all-around.

In personal performances at that tournament, he won three silvers and a bronze.

A few months later, at the world pre-Olympic championship, he won two gold and silver.

Shcherbo went to his first Olympics in the status of a favorite, but he did not even expect that he would go down in history.

According to the athlete, he was hoping for two or three gold medals, but not six out of eight possible.

First, the team with his participation won the team all-around, and then Shcherbo became the champion in the absolute championship.

In the finals of individual exercises, the gymnast, ironically, ended up off the podium on his crown freestyle, because after one of the jumps he flew out of the carpet.

The failure only spurred and angered Shcherbo, and he fully compensated for this loss with four victories in the remaining types - on uneven bars, rings, pommel horse and vault.

And all these medals were won on the same day.

“I’ll be honest: when I won six Olympic gold medals in Barcelona, ​​I definitely didn’t realize what it was.

It started only when he finished his career, ”the former athlete says now.

After the 1992 Games, Shcherbo experienced not only universal love and adoration, but also a number of unpleasant events.

His car was stolen twice, and his apartment in Minsk was robbed, taking about $ 25 thousand, which he received for his victories.

As it turned out later, the organizer of the crime was one of Vitaly's best friends, gymnast Nikolai Tikhanovich.

He was sentenced to three years in prison, and after that Shcherbo decided to move to the United States - for security reasons.

“In the States, when my wife Irina was in a demolition, my old friend Ed Isabell invited me.

At some demonstration performances (and he himself is a former gymnast) he came up and said: “Come to me, live in my house, let my wife give birth to a child under normal conditions.”

Ed paid for the insurance and that's it.

I lived with him for six months, helped his business at the gymnastics camp.

When Christina was born, I did not want to leave.

And so it remained.

That is, Irina stayed there with the child, and I traveled around the world and performed, ”said the athlete.

Shcherbo took part in four more World Championships, winning a total of 12 gold medals - there are no more male gymnasts in the asset.

And at the Games in Atlanta, he added four bronze medals to the Olympic piggy bank.

However, at that time he himself did not consider this a great achievement, despite the fact that the preparation for the Olympics was a difficult test.

The fact is that six months before the Games, Vitaly's wife Irina had a terrible accident, experienced a clinical death and was in a coma for a long time.

The athlete was in an absolutely "disassembled" state, but even this did not justify the lack of victories - "would like to win."

“My mentality is simple: there is only gold.

How many silver and bronze you won there is not important.

Although now I evaluate it differently: any medal is blood, sweat and sleepless nights.

But then I was extremely upset.

No consolation of the coaches - they say, you have only been preparing for the Games for three months - did not help, ”the athlete shared his feelings.

His career was cut short in 1997 due to an injury: shortly before the World Cup, Vitaly broke his arm during exhibition performances.

She had to be operated on and a needle inserted.

After that, he tried for several months to return to the previous level, but in vain.

“Young people peck in the ass, spur them on, but you physically can’t,” the gymnast recalled.

Having put an end to his career, Shcherbo stopped being torn between the two countries and plunged into organizing his own gym in Las Vegas.

His Vitaly Scherbo School of Gymnastics became known throughout the country, the specialist himself was attracted as a consultant to the US youth team, but this year he decided to sell it in order to pay more attention to the family.

Back in 2006, Vitaly divorced his first wife, and a few years later he married a second time - to the former gymnast Valentina.

“Selling was not a pity.

Having a gym for 23 years and carrying everything on your shoulders is hard.

I want to spend more time with my kids and relax a bit.

I don't know how long it will last though.

My goal now is to get the kids back on their feet.

I myself have achieved everything I aspired to.

I have everything,” admitted the legendary gymnast.