Unexpected opponents, a coach without titles and an injured legend: what you need to know about the Europa League final

The Rangers will try to win their first European trophy since 1972 and avoid the mistakes that prevented them from defeating Zenit in the UEFA Cup final 14 years ago. Eintracht will try to confirm the title of the most scoring team of the tournament and help their mentor Oliver Glasner take the first title as head coach. Why the upcoming decisive match of the Europa League is the most unpredictable in the last 13 years, and what surrounds it - in the RT material. 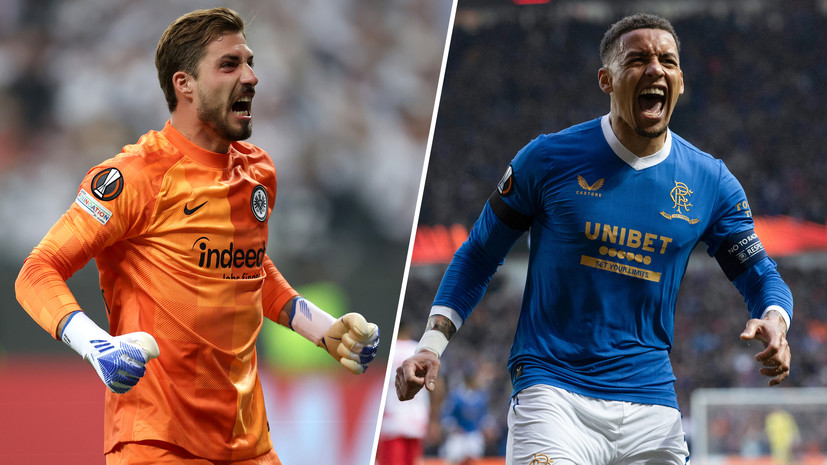 Before the start of the Europa League playoffs, few expected that Eintracht and Rangers would be in the final.

And this is not surprising.

Among those who began to challenge the title in the spring were the most titled team of the tournament - Sevilla, the star Barcelona under the leadership of Xavi, strong West Ham, Atalanta and Napoli, which shone with new colors with the arrival of Domenico Tedesco " Leipzig and Borussia Dortmund with Erling Haaland.

However, all the favorites gradually flew out, and the honor to fight for the trophy fell to two teams that started their performance at the group stage in the second-ranking European club tournament.

And this is significant in its own way, because the last time a title match did without teams descending from the Champions League was in 2019.

True, then much more status Chelsea and Arsenal got to him.

At the same time, it cannot be said that the finalists of this year were simply lucky - some of the favorites of Eintracht and Rangers were removed themselves, and in an extremely spectacular manner.

The Germans hit the gates of Barcelona three times at Camp Nou and defeated West Ham twice, while the Scots first destroyed Borussia on the road, and then made a comeback in the confrontation with Leipzig.

At a party, they lost with a minimum score, and at home they took a convincing revenge - 3: 1.

The last time the composition of the participants in the final was as unpredictable was in the late 2000s, when neither top-class teams nor the traditionally unstoppable Sevilla in the second most important European Cup were among them.

And then one of the contenders for the award was also the Rangers.

In 2008, the Scots for the first time in their history reached the final stage of the prestigious European tournament, but could not do anything with Zenit.

The Petersburgers won in Manchester with a score of 2:0, and then Igor Denisov and Konstantin Zyryanov scored goals.

At the same time, if we take the UEFA rating as a basis, the confrontation between Eintracht and Rangers will be one of the most “low-level” over the past 15 years.

Ahead of the current season, the teams were ranked 27th and 34th in the odds table, respectively.

That season, led by Quique Sanchez Flores, the "mattress" became only seventh in La Liga, and the "summer residents" took only 12th place in the Premier League.

It is easy to guess that for both teams the upcoming meeting, which will be held on May 18 in Seville, will mean a lot, because they have not achieved success in the international arena for more than 40 years.

In 1980, Eintracht took over Borussia Mönchengladbach (3:3) with two away goals and won the UEFA Cup (later transformed into the Europa League), and 13 years earlier the club won the Intertoto Cup by shooting Inter from Bratislava also on aggregate (4:3).

That tournament was not held under the auspices of UEFA and was the last in history, in which a sole winner was revealed.

Subsequently, the format was changed: for many years, the competition ended immediately after the end of the group stage, and the clubs fought only for cash rewards.

Until they fell under the jurisdiction of the Union of European Football Associations.

As for the Rangers, their track record looks even more modest.

They won their first and so far only international trophy in 1972 when they created a sensation and won the Cup Winners' Cup.

On the way to the final, they dealt with Rennes, Sporting, Torino and the star Bayern, which included Gerd Müller, Franz Beckenbauer and Uli Hoeness.

And in the decisive match they broke the resistance of Dynamo Moscow.

By the 49th minute, the blue-and-whites conceded three times, but almost won back.

At the same time, players from Glasgow have already made attempts to add this trophy to their collection.

In 1961, they lost the final to Fiorentina with Kurt Hamrin, and lost to Bayern six years later.

The outcome of the meeting was decided only in extra time, and Franz Roth became the author of the only goal.

And while there are always fears that the final meeting of the competition will not be very productive, in the case of the Europa League 2022 final, there is much more reason to assume the opposite.

After all, teams will come together that not only prefer to play open and aggressive football, but also score more than competitors.

The last time this happened was when Chelsea and Arsenal crossed paths.

Now the opponents have 42 goals for two.

And just under a third of them were chalked up by Rangers defender James Tavernier and Eintracht midfielder Daichi Kamada.

The Englishman, with seven goals, leads the scoring race, while the Japanese, with five goals, is tied for fourth.

At the same time, the situation is diametrically opposite in the table of assistants.

Midfielder Filip Kostic of the German club is leading with five assists, and he is pursued by Ryan Kent and Joe Aribo.

Among other things, two goalkeepers will meet in the final, practically guaranteeing themselves a place in the list of the 23 best players in this season.

Allan McGregor leads the league in saves with 38, just behind Kevin Trapp with 31.

And although it will be very difficult for the German to catch up with his counterpart in the number of reflected blows, he is quite capable of writing his name in history.

So far, no goalkeeper has been included in the Europa League Squad of the Season twice.

Since then, in addition to Trapp, such stars as Jan Oblak, David de Gea and Gianluigi Buffon have been among the best.

As for the mentors of the finalists, the upcoming match will also be extremely important for them, because previously none of them have achieved success not only in the international arena, but also with their current teams.

Giovanni van Bronkhorst took national trophies as head coach of Feyenoord, and Oliver Glasner only as an assistant.

In 2014, he helped Roger Schmidt lead Salzburg to victories in the championship and the Austrian Cup, and after that he himself did not succeed either at LASK or at Wolfsburg.

And although Eintracht Frankfurt is considered the favorite for the final, upon closer inspection, everything does not look so clear.

In a key game, the Eagles will not be able to count on defense leader Martin Hinteregger and wingback Danny da Costa.

In question and out on the field of Jesper Lindström.

The Dane was injured in the first meeting of the semi-finals with West Ham and only started training on Monday.

Although Glasner is optimistic and admits that he could appear from the beginning of the match.

The Rangers also have problems with the composition.

And the main one is the absence of Alfredo Morelos.

From 2018 to 2020, the Colombian ended the season as the light blues' top scorer, and now he ranks third in goals in the history of the Europa League (including goals in qualifying).

According to this indicator, he is second only to Klas-Jan Hüntelar (34) and Henrik Larsson (40).

However, at the end of March, he dropped out due to hip problems and will be able to return only in the second half of June.

Also, van Bronkhorst will not be able to count on defender Philip Helander and midfielder Janis Hadji.

In January, the Romanian received a severe knee injury, in connection with which the mentor hastened to declare that the season was over for him.

Although speculation regarding his possible performance in the final continued until the last days.

This was facilitated by both the statements of his father, Gheorghe Hadji, about his son's readiness to play in the decisive match of the tournament, and the player's participation in a photo session dedicated to him.