Bolshunov's failed chase and Chervotkin's bronze finish: Klebo wins the mass start and breaks away from everyone on the Tour de Ski

Johannes Klebo left no chances for his rivals in the mass start with the classic style at a distance of 15 km within the framework of the fifth stage of the Tour de Ski. Thanks to this, he practically secured a final victory for himself. Alexander Bolshunov failed to take a medal due to a broken stick, but climbed to second place in the overall standings of the race. And Alexey Chervotkin was ahead of Denis Spitsov in the fight for the bronze medal. 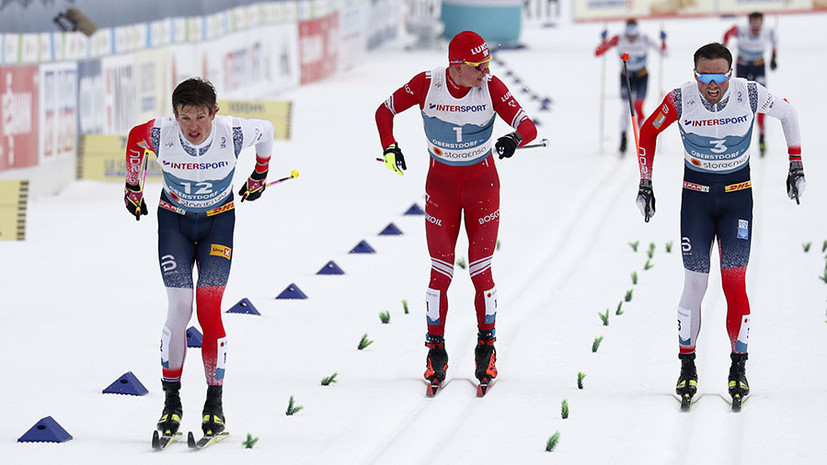 After Natalia Nepryaeva's victory in the mass start in the classic style, Russian fans were waiting for the continuation of the banquet in a similar race for men from Alexander Bolshunov.

Of the national team, it was the world champion who had the greatest chances for medals in this form.

A native of the Bryansk region, on the eve of the final Tuesday stage, it was necessary to minimize the gap in the overall Tour de Ski standings from the Norwegians Johannes Klebo and Paul Golberg. The 25-year-old athlete, who took the third place in the total, was behind the first one minute and 19 seconds, but the second - only 16 seconds. At the same time, in the free style mass start on the last day of 2021, Bolshunov was close to victory, but remained second, only 3.4 seconds behind Klebo. Now Alexander had a great opportunity to take revenge.

The main favorites, as expected, did not start the race too quickly.

And if Klebo kept close to the top three, then Bolshunov even dropped out of the top 10.

However, this should not have been very disturbing.

Alexander calmly saved his strength before the last laps.

The main thing is that the rest of the Russians stayed in the group of leaders and even went ahead for some time.

At first, Denis Spitsov drove the skiers behind him, and then Alexei Chervotkin took the first place.

Alas, it was enough for only half the distance.

All the key events took place at the equator of the mass start.

A whole group of Norwegians managed to support him, from which Klebo eventually stood out.

The partners literally pulled the compatriot to the Finn.

The three-time world champion quietly settled down behind a competitor.

The Russian managed to break a stick on the rise.

Some of the opponents touched her.

Despite the fact that the members of the domestic team worked as quickly as possible, it took some time to replace the item of ammunition.

While the competitors were breaking away, our athlete wasted precious seconds.

To the credit of the native of the Bryansk region, he did everything to catch up with the fugitives.

On the fourth lap, the skier took an incredible acceleration and almost got Niskanen and Klebo.

It seemed that one more leap - and Bolshunov will join the fight.

Alas, he lost too much strength and gradually began to fail.

The help of Spitsov, who stayed in the top five and tried to lead the pursuit group, did not help either.

Nothing came of it.

The lag only grew in the future.

And Didrik Tønset, of course, did not strive to work in concert with the Russians.

“Bolshunov did not ask for anything.

I tried to help him.

But on the plains, I didn't really succeed.

I ate a little.

Therefore, Chervotkin drove around me at the finish line, "Spitsov complained.

And the leader of the overall standings that evening turned out to be invincible.

The Norwegian was supposed to "rest" behind the opponents' backs until the finish line, but he started working on the fourth lap.

Not even Niskanen could do anything about it.

Finn helped Klebo escape from his pursuers, but failed to support his dash.

So, the Scandinavian finished in splendid isolation.

The Russians also managed to please the fans. In addition to Spitsov and Bolshunov, Chertvotkin joined the fight for medals at the last moment. The three of them drove away from Tönseth and tried to reach Niskanen, but there was not enough distance. And in the fight for silver, Alexey was ahead of Denis by microscopic 0.3 seconds. It is curious that the bronze medal winner after the finish found a reason for self-criticism - too active work in the second or third laps.

“I had to go out at my super-maximum capabilities to first get to the group that Denis and Alexander were taking.

And then I realized that there was no point in sitting back, I had to continue to race in the same way, not to slow down.

I heard he asked me to stand in front of him, and it became easier to walk in the back, tried to do it, adjusted to him, I don't know if it helped or not, ”Chervotkin said on Match TV.

Bolshunov finished only fifth, 27.9 seconds behind the winner.

In the overall standings, he is now exactly two minutes behind the leader and has practically no chance of a final victory.

But on the eve of the final race "Tour de Ski" he managed to rise to second place in the overall standings.

Golberg failed the mass start and fell to fifth place.

And the closest pursuer, Niskanen, is 49 seconds behind the Russian.