Ahead of the Norwegians: Chervotkin and Bolshunov won silver and bronze in the individual race at the KM stage in Ruka

Russian skiers won two medals at the first stage of the World Cup in the Finnish Hand. In the men's 15-kilometer race from the time trial, Alexei Chervotkin lost only to the host of the competition, Iivo Niskanen. Alexander Bolshunov also opened an account for his awards, having managed to climb to third place with the help of a powerful last circle. In the girls' 10 km race, Tatyana Sorina and Yulia Stupak finished eighth and ninth, and the main favorite Teresa Johaug was unexpectedly defeated by Frida Karlsson. 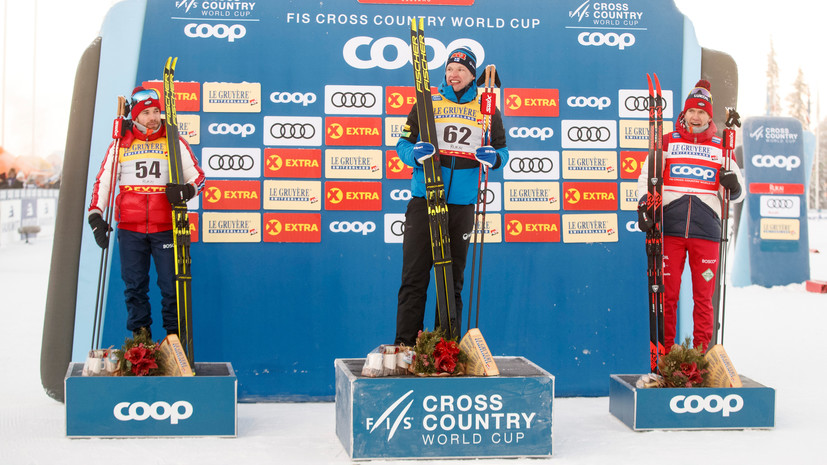 The first medals of Chervotkin and Bolshunov

The World Cup in cross-country skiing in Ruka continued with the drawing of medals in the classic 15 km cut for men and 10 km for women.

For the first time in the season, the participants had to conduct a kind of Olympic rehearsal - the same discipline will be included in the program of the Games in Beijing.

In addition, it was the first distance race since the personal sprint that took place the day before.

Usually, if men are running, then the fight between skiers from Russia and Norway comes to the fore.

In the Hand, at first, no one really intervened in their confrontation.

Eric Valnes took the lead early enough, which was quite unexpected, since he had a reputation for being a strong sprinter.

Under the pressure of the first Russian remote controllers, the 25-year-old Norwegian retreated slightly. Sergey Ustyugov, Ivan Yakimushkin and Alexey Chervotkin passed him one by one. A little later, Ilya Semikov joined them. Other representatives of the Norwegian national team could not answer with anything. Johannes Klebo's race did not go right away - the winner of last year's cut in Ruka ran hard and was inferior to two compatriots.

But Iivo Niskanen intervened in the dispute between the two ski superpowers. His classic move always poses a danger to rivals, and in front of his native fans, the Finn immediately set his sights on gold. After the first five-kilometer lap, he took the lead with a comfortable lead of at least ten seconds and never lost it. The Russians covered the second third of the distance in different ways. If Chervotkin confidently walked in second place, then Ustyugov, Semikov and Ivanushkin began to fight the Norwegians for places in the top eight and stopped thinking about medals.

After the start of the Finn, there were only three riders who were able to impose a fight on him.

The Norwegian Emil Iversen started the race quite successfully and for some time was included in the group of contenders for the awards, but quickly entrusted this task to Wallnes.

The last of the favorites to leave the starting town was Alexander Bolshunov.

There was no definite dynamic in his running.

The World Cup winner was either closing the gap with Niskanen and sharing the second position with Chervotkin, or rolling back.

But on the final lap, the Russian added and won one second over Valnes in the dispute for third place.

As in the previous year, silver and bronze went to Chervotkin and Bolshunov, while Niskanen became the winner.

Ustyugov showed the fifth time, and this was his best result in his career for the classic cut.

Smikov and Yakimushkin were also in the top eight, thanks to which, according to the results of the race, the Russian men's team even surpassed Norway in the Nations Cup.

In the individual standings of the World Cup, Klebo, who finished ninth, seized the lead from Alexander Terentyev and was one point ahead of Valnes.

Bolshunov after two starts is seventh, but will be able to improve his position in the Sunday pursuit.

In it, he will immediately outstrip most of the other contenders for the leader's yellow jersey.

Another disappointment awaited Norway in the women's race. The 10-kilometer cut was supposed to start another winning streak of Teresa Johaug, who won gold in this discipline at the last world championship with an incredible half-minute advantage. However, the silver medalist of that race, Frida Karlsson from Sweden, managed to take a worthy revenge.

The two skiers immediately made it clear that only they would fight for the first place with each other.

In this duel, Johaug did not manage to come out ahead on a single cutoff.

Most of the distance, the Norwegian was very close to the 22-year-old Swede, but in the last two kilometers she gave up sharply.

The 14-time world champion lost eight seconds in this segment at once and lost almost the same amount to the unexpected bronze medalist Katharina Hennig from Germany.

Johaug managed to win her only one and a half seconds.

After a not entirely successful sprint performance, Russian skiers were again left without medals.

Even before the 5 km mark, Tatyana Sorina and Yulia Stupak began to fight for getting into the top ten, which in the end they coped with, and Natalya Nepryaeva, after a good first round, rolled back to the middle of the second ten and showed the 14th result.