Sharjah will not be affected by the departure of Al-Anbari..and qualified to compete for the league on conditions

Athletes confirmed that Sharjah is a champion team and qualified to compete for the professional league title, and that it will not be affected by the departure of its former coach, Abdulaziz Al-Anbari, pointing out the importance of evaluating matters within the team from all sides, working to address the causes of the imbalance, and supporting the team with good elements of players, especially 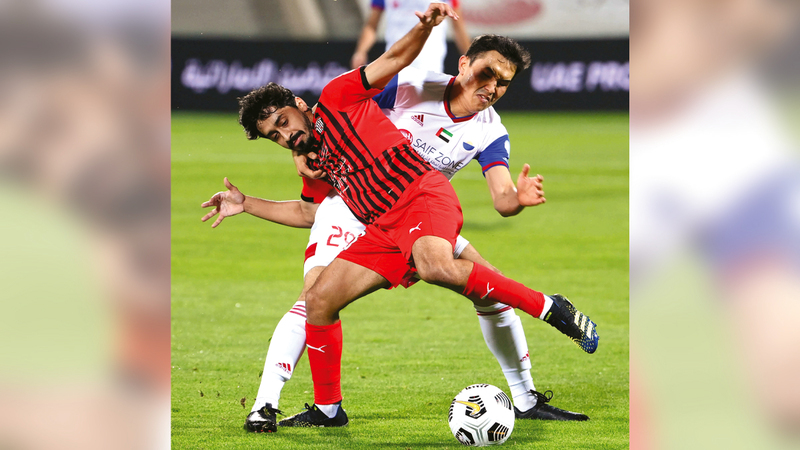 Athletes described him as the "king" character maker.. They assert:

Sharjah will not be affected by the departure of Al-Anbari..and qualified to compete for the league on conditions

Athletes confirmed that Sharjah is a champion team and qualified to compete for the title of the professional league, and that it will not be affected by the departure of its former coach, Abdulaziz Al-Anbari, pointing out the importance of evaluating matters within the team from all sides, working to address the causes of the imbalance, and supporting the team with good elements of players, describing Al-Anbari as making A new personality for the team, and during four seasons he spent as a team coach, he succeeded in changing the culture of his players from simply competing for survival to winning championships, stressing that the blame for what happens to the team is not only on Al-Anbari, and that there may be other things that may have caused the team’s negative results in The last period.

They told «Emirates Today»: "What is happening in Sharjah must be evaluated from all sides, whether in terms of the quality of players or positions that need strengthening, as well as the way and style in which the team plays."

The career of coach Abdulaziz Al-Anbari witnessed many successes and distinctions with the Sharjah team over the course of four seasons, especially that the citizen coach was able to change the team’s position from a wrestler to stay to a champion and a permanent competitor for the league shield.

The Sharjah Football Company at the Sharjah Club had suddenly decided to dispense with Al-Anbari and appoint the Spaniard Juan Carlos as temporary coach of the team, following the big loss that the team suffered against Al-Nasr by three clean goals in the seventh round of the Professional Football League, and this match represented his last stop with Sharjah after A long and busy career he spent in leading the team spanned four seasons, namely 2017-2018, 2018-2019, 2019-2020 and 2020-2021.

And the successes achieved by Al-Anbari with Sharjah imposed themselves, to the extent that many called on more than one occasion to appoint him as coach of the national team.

Observers describe Al-Anbari as the coach, the maker of the glory of King Al-Sharqawi, after he made the team a new and distinctive personality, and all teams, especially the big ones, feared him and worked for him a thousand accounts.

Al-Anbari, who took over the leadership of the team in 2017, managed to transform it from a mere team competing to remain among the adults in the professional league, and avoid relegation to the amateur league, to one of the strongest teams in the league. Before the final turnaround in the team's career occurred after a series of negative results.

Al-Anbari crowned his successes with Sharjah by winning the league championship in the 2018-2019 season, after he missed the podiums for 23 years, and also won with Sharjah the UAE Super Cup title in 2019 at the expense of Al-Ahly youth.

Al-Anbari's career with the team began as a coach in October 2017, when he was appointed to succeed Portuguese coach Jose Besser, as he took over the team after the fifth round, and at the time was ranked penultimate in the league standings with one point, but he finished the league and the team in sixth place. Despite the team’s recent negative results in the current edition of the league, after suffering three losses out of seven matches, winning four of them to gain 12 points, Sharjah is still one of the teams competing for the league despite its decline from third to fifth place after the last loss against Al Nasr. .

For his part, the former national team coach, Dr. Abdullah Misfer, said that Al-Anbari gave a lot to Sharjah, and thanks for what he gave to the club after he was able to transfer the team in cooperation with the club’s management a great move, and created him a personality and led him to win the league and the Super Cup after an absence of 23 years About the podiums, considering that change is the year of life for the coach, which is a normal situation, but Al-Anbari undoubtedly put a distinctive imprint on the Sharjah team.

Misfer added, "Al-Anbari's career was successful by all standards, and the results testify to that, and it is enough that he left the team while he is still in the midst of competition for the league championship, and I wish him success in his next training career."

Misfer considered that "despite the departure of Al-Anbari, Sharjah is a champion team and qualified for the competition that is still in its core, and it has all the elements of competition for the league."

For his part, the former international player and technical analyst, Abdul Rahman Muhammad, confirmed that Al-Anbari created a team that has the personality of competing for championships, and left a champion team that is always present in tournaments, in addition to the presence of a good group of players with a high technical level, indicating that Sharjah does not lack anything.

In turn, the former coach of the Al-Bataeh team, Tunisian Noureddine Al-Obeidi, stressed that Al-Anbari achieved results with Sharjah that exceeded expectations, and transformed the team from a team struggling to survive to a team competing for championships, with a significant improvement in the technical aspect at all levels.

Al-Obaidi added: “With regard to Sharjah, the season is at its beginning, and it is able to be at the core of the competition if all parties unite, and provide the elements that the team needs at this time, namely the good selection of the technical staff for the next stage, and work to get the players out of the declining situation technically. Mentally, lately.