Barcelona takes air in the box and in the field

Maybe it's just about surviving. To economic hardship. Sports limitations. It is impossible to trust this Barcelona. There is not a day when a ... 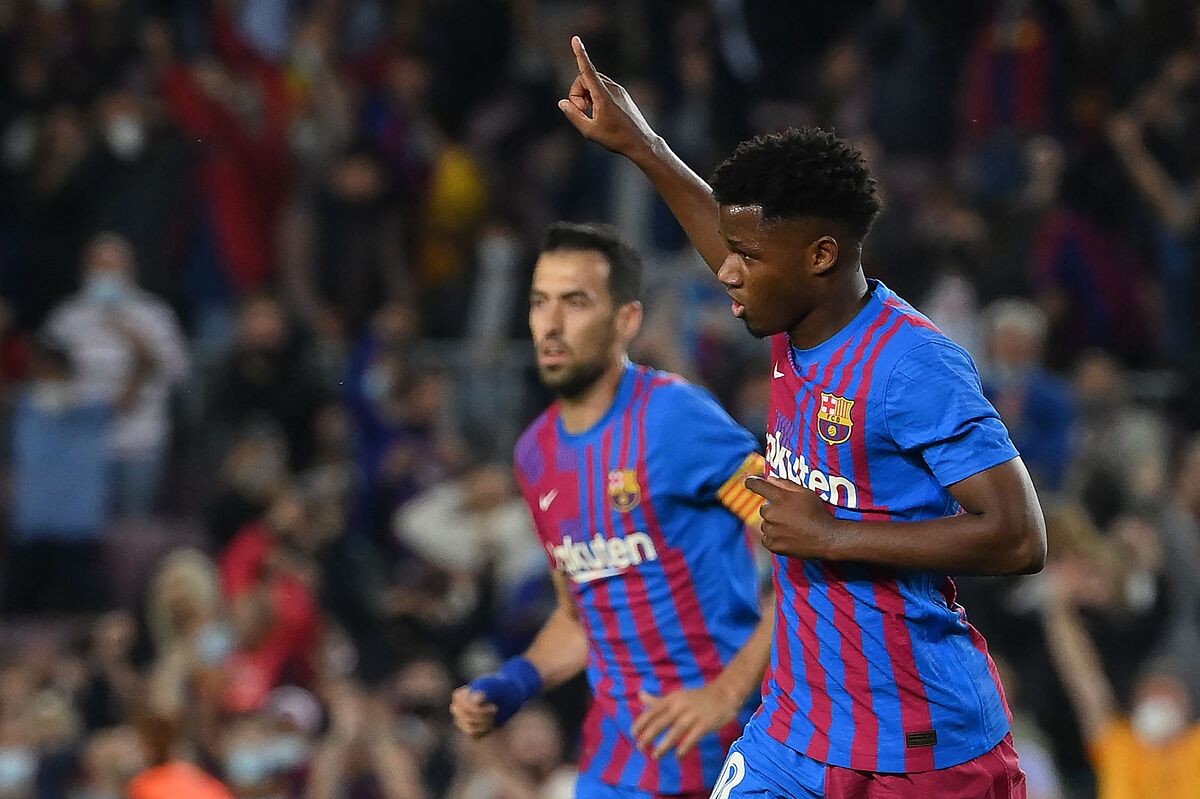 Maybe it's just about surviving. To economic hardship. Sports limitations. It is impossible to trust this Barcelona. There is not a day when a coin is not tossed. With only one difference. If

Ansu Fati is the one

who throws it, it usually comes out heads. A goal and a controversial penalty caused by the young star led the Catalans to a long-suffering victory against Valencia that lacked tusk.

, who would have thought it, gave the lace and allowed a grateful debut for

in the sunset. At the shout of "Kun, Kun, Kun" the Camp Nou was able to rediscover his smile. It was missing.

The day was special. They said historical. In a world where hype is the norm, disappointment and surrealism must always match. Laporta's board of directors had to wrest the approval of a 1,500 million euro loan for Espai Barça from a handful of resistant compromisarios. Between the many hours and there were those who demanded a referendum to get something of such caliber forward, Laporta ended up picking up the clothes. The assembly postponed and ready. That the game begins.

But the disaffection of the fan -47,317 spectators in the stands- still weighs on that old stadium in which, according to the Barcelona directive, not even the bars can have ovens because the electricity is not enough.

An enclosure in which a person has to be watching the meters so that the leads do not jump.

The one who tries to keep his light on is Ronald Koeman.

In desperate search for a balance that would allow him to hold onto his workstation, the technician once again shook his indecipherable cocktail shaker.

This time the great novelty was to place Sergiño Dest as a right winger, a wise decision, in a 4-3-3 in which Sergi Roberto would cover his back and the hyperactive Gavi would act as a left inside.

Although the determining asset of the line-up was the presence of Ansu in the starting eleven.

The weight of the club's hope rests on his knees and his head.

The challenge is enormous, but the boy exploits his accumulation of virtues with such confidence that it is difficult not to believe that he is a prophet for Barcelona.

Without Ansu, Valencia's initial blow might have been unbearable.

Because Gayà, who reappeared in the starting team with Carlos Soler, advanced to his team at the same dawn.

No one attended to the side in a second play generated after a corner kick.

Gayà, alone and from 30 meters, hit the perfect shoe.

But with Ansu, Barcelona has to whom to entrust their fears to turn them into hope.

He was grateful on the tenth that Memphis moved like Nureyev on a tile.

At the first touch, the Dutchman returned the ball to Ansu, who was already able to execute what he was plotting.

Diakhaby, discreet, crossed his arms while the youth squad drew a thread that supposed a tie at one.

Bordalás, before going into the mountains in the second half, thought at first that with a 4-5-1 he could short-circuit Barcelona's attack routes.

So he tried to rest the rhythm.

Something that Gavi was not willing to accept, who wanted to take everything away.

When he had already committed his third foul, it was the referee who stopped him with a warning.

His weight dropped then.

Managing your competitive momentum is one area for improvement.

Valencia did not have a clean start because of pressure from Barça. But it never stopped intimidating. Guedes, of course, was one of his main arguments until he burst. Not so Maxi Gómez, a mere island that was barely visible due to his set of elbows and a free kick at the end.

In the last stretch of the first act, Barcelona darned a perfect choral play.

Again Memphis opened spaces behind and with a feint.

Jordi Alba, who yearns to recover an alliance like the one he had with Messi, found Ansu Fati.

This one had the position gained to Gayà, but it remained without arming the leg after the entrance of the defender.

The referee Gil Manzano understood that if Ansu had not finished it was because there was a penalty.

Gayà brushed the ball before contacting the forward.

The most dubious action required at least a glance at the VAR monitor.

It was not so.

It was Memphis's turn.

And the fans were speechless.

Such was the blow from the striker that Cillessen was petrified.

Koeman had a hard time processing his advantage.

Bordalás turned the drawing around and sent his pieces to dominate.

But they erred where they should not.

Carlos Soler ran into the stick, Guedes was stopped by Ter Stegen and Piqué was left with a ball when it was dead in the small area.

Until Coutinho, despite a dilapidated control and after Dest assisted him, closed the night.

Before stopping the assembly and running from the Palau to the Camp Nou box, Laporta had a crooner moment.

"The truth is never sad, what has no remedy."

Machado wrote it, Serrat sang it and the president hummed it in his lullaby at the end of the world.

Although even the Apocalypse can be left.