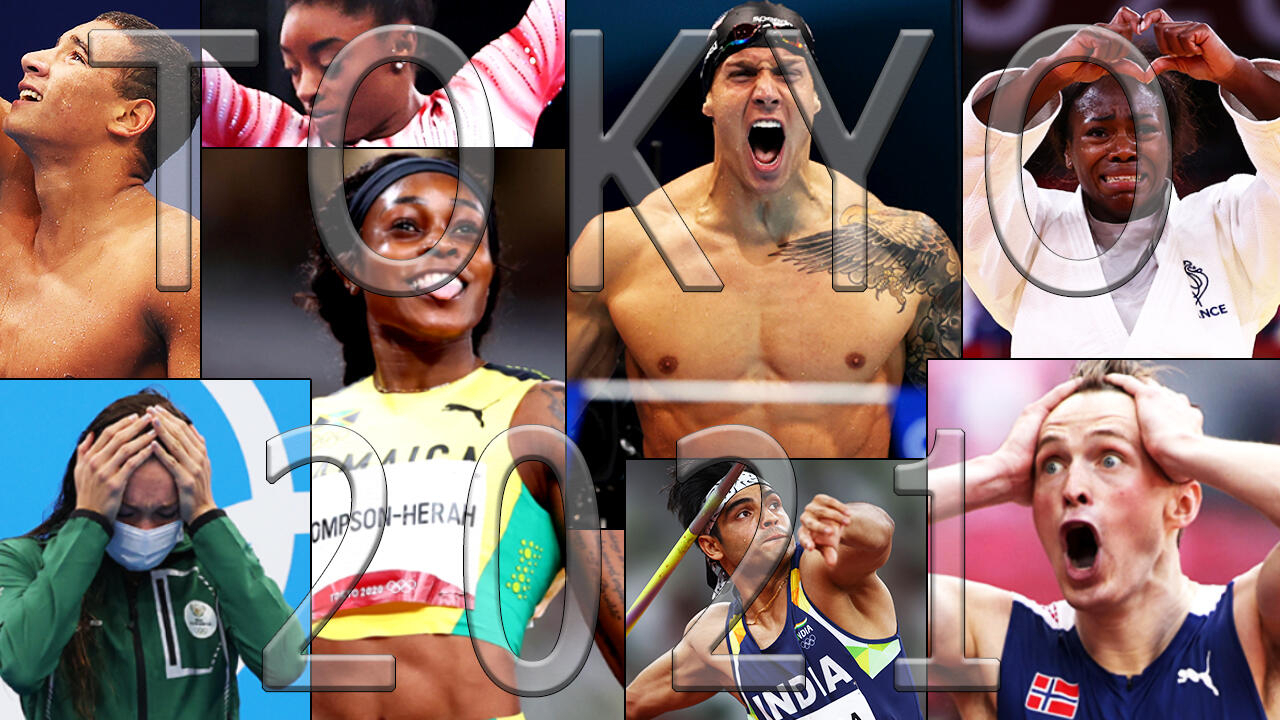 And on all terrains, the exploits followed one another in Tokyo.

A look back at the men and women who left their mark on these Olympics.

Usain Bolt retired, the new boss of the Jamaican sprint is Elaine Thompson-Herah.

At 29, the Jamaican has been exceptional in Tokyo.

With the 4x100m relay, Elaine Thompson-Herah also won the gold medal, after the silver in Rio.

Tokyo has been awesome for me 3/3 all glory to God.

In 2016, he had taken two gold medals in relay but was still in the shadow of the great Michael Phelps.

Since the latter retired from the pools, Caeleb Dressel is the boss.

The 24-year-old American admitted that his Olympic week was nerve-racking.

That didn't stop him from gobbling up the gold medals.

The world records in the 400m hurdles took a big hit during the Olympic finals.

On August 3, the Norwegian Karsten Warholm,

at the end of an anthology race

The American Rai Benjamin signed a 46''17 gun behind him, but insufficient against the first man to break the 46 seconds barrier.

The next day, in the women's final, the same pattern: the American Dalilah Muhammad was very strong (51''58), but not enough against her compatriot Sydney McLaughlin, Olympic champion

by clearly improving her world record

Flag bearer of the French delegation, Clarisse Agbégnénou arrived in Japan with a clear objective: the individual gold medal, the only title that was still missing from her record.

In 2016, she lost to Slovakia Tina Trstenjak in the final.

This year, the two women found themselves in the final.

Overwhelmed by emotion, the Frenchwoman can savor.

She added a second gold charm to the team competition.

Novak Djokovic seemed launched like a missile towards his golden Grand Slam goal over one season (the four Grand Slam tournaments and the Olympic gold medal), which only Steffi Graf managed in 1988. But in the semi-finals, the Serbian exploded in midair in front of Alexander Zverev.

Alexander Zverev is the first German to be crowned Olympic champion in men's singles.

Qualified for the 400m final with the eighth and last time of the series, Ahmed Hafnaoui was not expected on the podium.

The 18-year-old Tunisian has yet beaten everyone's pawn in the final from his lane n ° 8.

In ambush among the first three, Ahmed Hafnaoui took the lead in the last length (3'43''36).

Sensation at the javelin throw with the coronation of Neeraj Chopra, 23 years old.

The Indian had serious chances of medals, but the gold seemed promised to the German Johannes Vetter (96.29m this year).

Yet it was Neeraj Chopra who was crowned Olympic champion with a throw at 87.58m, while Vetter collapsed.

It is the first time that India has won a gold medal in athletics.

His last silver charms went back to Norman Pritchard at the 1900 Games. Neeraj Chopra is a new popular hero in India: on Twitter alone, he has gone from 143,000 to 2.5 million subscribers.

Usain Bolt is no longer running, Yohan Blake is on a downward slope, Christian Coleman is suspended, Trayvon Bromell failed in the semifinals… In short, Jamaica and the United States no longer reign supreme over the men's sprint.

And surprise in Tokyo, it is an Italian who won gold in the 100m, the main event:

He is the first European since Briton Linford Christie to adorn himself with gold over 100m.

Jacobs then doubled in gold in the 4x100m, once again setting the European record.

The Italian Lamont Marcell Jacobs, Olympic champion in the 100m, on August 1, 2021 at the Tokyo 2020 Olympic Games © Javier SORIANO AFP

The appearance of skateboarding on the Olympic Games program allowed Japan to discover a very young star.

On July 26, Momiji Nishiya, 13 years and 331 days old, became one of the youngest gold medalists in Olympic history.

The teenager who will celebrate her 14th birthday on August 30 won the park event.

She is the youngest Olympic champion in Japanese history.

The precocity record officially remains in the hands of the American diver Marjorie Gestring, 13 years and 267 days old when she was crowned in Berlin in 1936.

26 years old, just a few days: that's how long it took to find an athlete capable of breaking the world record for the triple jump established in 1995 by the Ukrainian Inessa Kravets.

This athlete is Yulimar Rojas.

The lanky Venezuelan, already quadruple world champion and silver medalist in Rio, this time took gold with a last jump to 15.67m (against 15.50m for Kravets).

Mad with joy, the 25-year-old Olympic champion remains true to herself: she does not "set limits for herself" and still aspires to go beyond 16 meters from now on.

Venezuelan athlete Yulimar Rojas, jubilant after breaking the world record in the final of the Tokyo Olympics on August 1, 2021. REUTERS - HANNAH MCKAY

If Chad le Clos did not manage to grab new medals in these Games, his compatriot Tatjana Schoenmaker brilliantly took on the task of wearing South Africa's colors as high as possible.

The swimmer first took the silver in the 100m breaststroke

before crushing everyone in the 200m breaststroke final

South Africa had not had a gold swimmer since 1996 and Penelope Heyns.

For his last Olympic Games, Allyson Felix, now 35, has entered a little more into the legend of athletics.

the most successful woman of the Games in athletics

ahead of Slovenian (and ex-Jamaican) Merlene Ottey and her nine Olympic charms.

And she also passed the illustrious Carl Lewis and his ten medals (9 in gold and one in silver).

A new sport at these Games with karate and skateboarding, surfing saw the consecration of two of its stars: the Brazilian Italo Ferreira and the American Carissa Morre.

Recognized in their discipline and already rewarded many times, these two conquered gold in shortboard, despite a few sessions made disappointing for all those with unfavorable weather.

The first Olympic champions in history, they symbolize the successful union between the amateur world and the professional world in Ichinomya, the theater of events in Japan.

He will go down as the first Olympic champion in the history of karate.

Already world champion, European champion and world number one in his category, Steven Da Costa honored his status on Thursday August 5 by beating Turkish Eray Samdan (5-0) in the final.

It is only natural that the French national Olympic and sports committee entrusted him with the status of standard bearer for the closing ceremony of these Games.

which will never be erased

”, karateka still hopes that his sport will be on the program for the next Games again.

The United States finished first in the swimming medal standings, but Australia has never performed so well with 20 medals including 9 gold.

And Emma McKeon is no stranger to this raid.

Like Dressel on the male side, the swimmer was imperial for women.

She also became the most successful swimmer in a single edition of the Games, equaling American Katie Ledecky's record (four gold medals in 2016).

At 35 (she celebrated her 36th birthday on August 8, the closing day of the Tokyo Olympics), the Polish woman returned from a left knee injury that kept her out of competition for two years.

With a throw of 78.48m, she again showed everyone what she is capable of.

Radiant in Rio with four gold medals and one bronze, splendid at the Worlds in Doha 2018 (four gold medals, one silver medal, one bronze medal) and Stuttgart 2019 (five gold medals), Simone Biles was expected as one of the stars of the Tokyo Games. The American has stood out in another way: by showing the world how much pressure can have

Victim of "loss of figures", a phenomenon similar to a black hole which causes gymnasts to lose their bearings in space, Simone Biles preferred to withdraw from the all-around team competition in progress, then to ignore the finals in vault. , uneven bars and floor.

She eventually competed on beam for a bronze medal, in addition to silver in the all-around team competition.

His career, among others, leaves some avenues for reflection on the management of the mental health of high-level sportsmen and women.

Olympic Games: the results of African countries in Tokyo 2021