Al Suwaidi: The UAE girl can win an Olympic medal in 2028 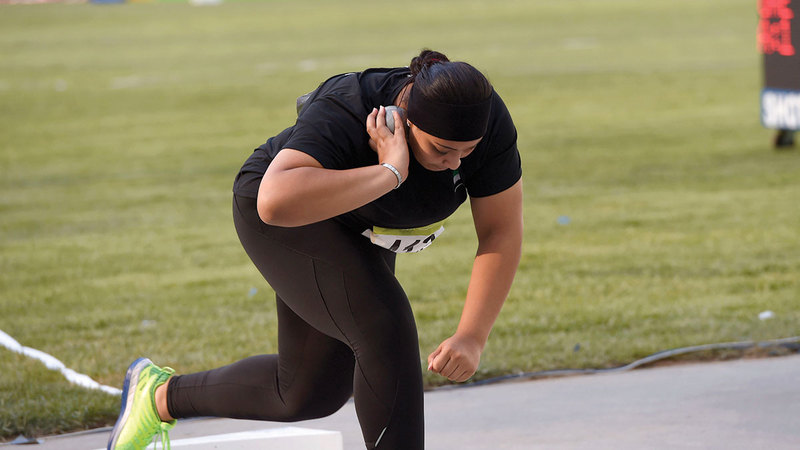 Al Suwaidi: The UAE girl can win an Olympic medal in 2028

The Secretary-General of the General Women's Union, member of the Board of Directors of the Sheikha Fatima Bint Mubarak Women's Sports Academy, Chairperson of the Emirates Committee for Women's Sports, and member of the Organizing Committee for Women's Sports in the Gulf Cooperation Council, Noura Al Suwaidi, confirmed that the participation of the UAE girl in the Olympic Games for the fourth time in a row is a A great achievement for women's sports in the country, by contesting the female player Fatima Al Hosani in the discus throwing competitions in the athletics competitions, noting that the UAE girl is able to obtain an Olympic medal in the 2028 Olympics.

Al Suwaidi told "Emirates Today" that Emirati women's sport is moving at a steady and confident pace towards achieving its sporting renaissance, to occupy a leading position on the regional and international sports arena with its successive achievements, thanks to the support and directives of Her Highness Sheikha Fatima bint Mubarak, President of the General Women's Union, President of the Supreme Council for Motherhood and Childhood Supreme Council of the Family Development Foundation «Mother of the Emirates».

She added: "Participation in various local, Arab, Gulf and continental championships in the past years has greatly contributed to the development of women's sports, especially with the great development witnessed by Arab and Gulf championships, for example, the Women's Sports Championship of the Cooperation Council for the Arab States of the Gulf, which had a great impact on the development of women's sports." The development of the skills of UAE female players, raising the level of sports, and the emergence of many champions in most team and individual sports, which qualified them to participate strongly in Arab, Asian and international championships.” She presented a wonderful picture of the daughter of the Emirates in this rich Gulf forum.

She explained: "Fatima Al Hosani's participation in the Tokyo Olympics is a new achievement for women's sports, especially since the continued presence of the UAE girl in the largest sporting event in the world is very important for women's sports in the country, to enhance her presence that continued over the previous three editions in each of the Beijing 2008, London 2012 and Rio de Janeiro 2016.

She pointed out that "women's sports in particular and sports in general in the UAE are able to reach higher levels than they have reached in the current situation, in proportion to the great position the state has reached in all different fields, expressing its great confidence in the UAE's ability to compete." The strong world championships in an honorable manner befitting the name of our dear country, in order to win more medals at the level of the Olympic Games.”

She added: "Obtaining an Olympic medal is not an easy thing, and it requires great preparation and capabilities, and there is no doubt that the UAE girl is able to achieve this achievement, by continuing to work on discovering talents and refining them through advanced training programmes, as I see that caring for young women and preparing them in an appropriate manner. It is the way to push women’s sports for more leadership and progress, and the UAE girl will be able to compete for an Olympic medal in the 2028 edition.”

And she continued: "The General Women's Union represents the umbrella that supports the efforts of the women's movement in the UAE, in order to advance the development and growth process of the country to advanced ranks in all fields and sectors, including the sports sector, through its work on developing plans and programs that contribute to enhancing the status and status of women." Building its capabilities and overcoming the difficulties facing its participation in various walks of life.”

Al Suwaidi explained that "the Fatima Bint Mubarak Women's Sports Academy has managed, over the 10 years since its establishment, to achieve many achievements and successes in the field of women's sports, thanks to the support and guidance of Her Highness Sheikha Fatima Bint Mubarak, and the follow-up of Sheikha Fatima Bint Hazaa Bin Zayed Al Nahyan, Chairperson of the Academy's Board of Directors. Fatima Bint Mubarak Sports, President of the Abu Dhabi Club and Al Ain Ladies Club. Since its establishment, she has worked within strategies and plans to enhance the status of Emirati women and push them towards podiums in local and international forums and create a generation with high physical health. She is also working to continue hosting sports conferences that receive many of the International sports figures who are influential in their fields to provide opportunities to benefit from these experiences in line with the capabilities of the daughter of the UAE, who does not know the impossible.”

And she continued: "The Emirates Women's Sports Committee has been promoting the Emirati women's sports career, which has launched several national initiatives to develop the women's sports sector, in line with the great support it receives from the wise leadership, and the great attention given by the wise leadership, headed by His Highness Sheikh Khalifa. bin Zayed Al Nahyan, President of the State, and his brother, His Highness Sheikh Mohammed bin Rashid Al Maktoum, Vice President and Prime Minister of the UAE and Ruler of Dubai, and his brother, His Highness Sheikh Mohamed bin Zayed Al Nahyan, Crown Prince of Abu Dhabi and Deputy Supreme Commander of the Armed Forces, and their brothers Their Highnesses members The Supreme Council of the Federation is the rulers of the Emirates, with sport in general and Emirati women in particular.”

• The continued presence of the UAE girl in the largest sporting event in the world is very important.

The participation of the UAE girl in the Olympics: