France is in Munich this Tuesday, June 15 to face Germany. One of the most anticipated posters of the group stage of Euro 2021 between the last two world champion countries. 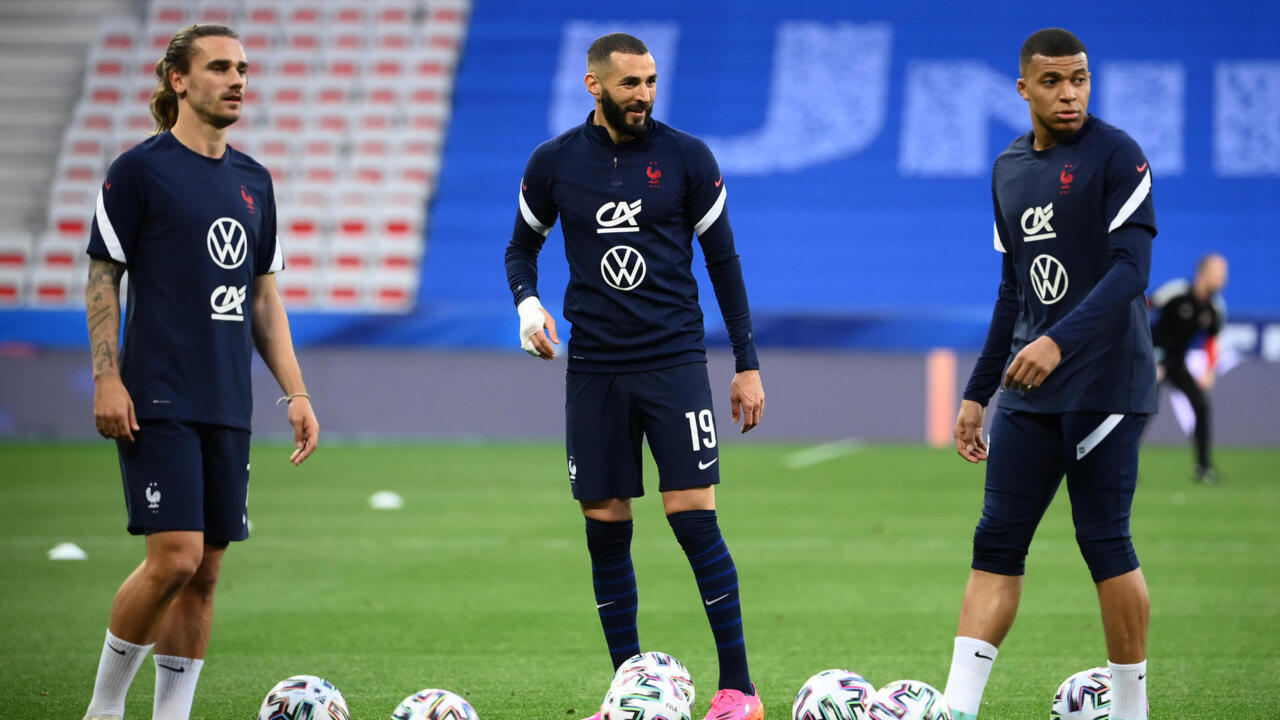 Antoine Griezmann, Karim Benzema and Kylian Mbappé warm up before the match against Wales in preparation for the Euro on June 2, 2021 in Nice.

France is in Munich this Tuesday, June 15 to face Germany.

One of the most anticipated posters of the group stage of Euro 2021 between the last two world champion countries.

From our special correspondent in Munich,

Under oppressive heat, without a corner of shade, a young boy expects the impossible. In front of the Allianz Arena, on the outskirts of Munich and on the edge of the highway, Chahid hopes to find the Grail: a ticket to see Mbappé, Griezmann and

They are waiting for us and they have their teeth!"

The Germans have not digested the defeat of Euro 2016. I want to see France shine once again,

”says this French student who is taking advantage of an exchange with the University of Stuttgart.

If he seems impatient to attend this shock meeting, in the streets of Munich, in the middle of the day, the volunteers supposed to inform football fans do not seem overwhelmed.

It must be said that

after a year of closed session, the Allianz Arena can only accommodate 14 000 spectators, 20% of its total capacity.

But the show should live up to the event.

The Blues get to the heart of the matter

The high level is an athletic fight, there will be commitment and duels.

The technique will make the difference but there is always a total commitment from both teams.

We have been warned, the Germans too,

”commented French coach Didier Deschamps on the eve of this first Euro match for the Blues.

Four weeks after the announcement of the 26 players and the surprise of the return of Karim Benzema, the Blues get to the heart of the matter.

Something to whet the mouths of the few supporters met on Marienplatz, in the heart of the city.

This historic duel has often turned to the advantage of France.

The Habs have won 14 of the 31 games against the German neighbor.

And the Blues have not lost in Germany against the Mannschaft since 1987 (three wins and two draws).

During Euro 2016 at home, France, ultra dominated by the Germans in the semifinals, had yet won the meeting with a double from Antoine Griezmann.

Today, the Blues can now look Germany in the eye.

In the hearts of French fans who have passed a certain age, the Mannschaft remains forever associated with the tears of Sevilla-82 and Guadalajara-86, before being brought back to happier days.

Germany have never lost their first game in 10 appearances

Germany will have to be ready to "

not always try to get by with good football,

Against players like that, we also have to send a message ... and early.

Everyone fights with their weapons. Our weapons are to play our football together. If their weapons, that's it ...

”replied Mbappé. Before going to challenge Hungary then Portugal, defending champion, in Budapest, the Blues start with a big piece, going directly to the main course, skipping the starter.

Since the establishment of the group stage in 1980, Germany has never lost its first match in 10 participations.

In eight participations, France either!

, the most German of the French, wants a draw.

Two hearts are beating in my chest for this duel.

I have loved Germany since my 12 years at FC Bayern, but I am and will remain French.

Will “Kaizer Franck” be right?