Return to the top: the Russian team won the women's relay at the KM biathlon stage in Anterselva

The Russian women's team won gold in the relay at the Biathlon World Cup in Anterselva, Italy. Evgenia Pavlova, Tatyana Akimova, Svetlana Mironova and Ulyana Kaisheva used nine extra rounds to avoid penalty loops. This victory was the first for the team in two years. The Germans came second to the finish line, the French women became the third. 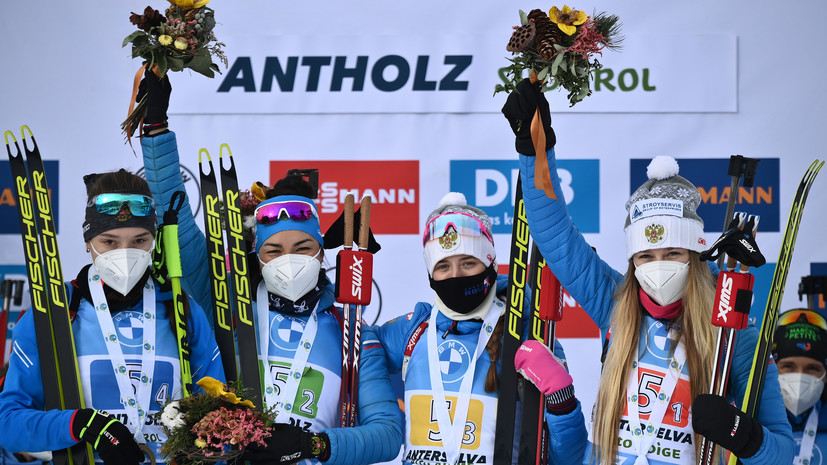 The last day of the Biathlon World Cup in Anterselva began with the women's relay.

The Russian national team was somewhat surprised by its composition - the coaches entrusted the second stage to Tatyana Akimova.

She hasn't run in team races in a long time, since January 2018.

Her recent results in individual races were not much better than those of her compatriots, but at the recent stage of the IBU Cup, the native of Chuvashia not only won two sprints, but was also very reliable just in the relay.

On the first lap, the relay participants fell as many as three times, but the Russian woman kept ahead of the peloton and might not even know about the massive blockages behind her back.

She calmly ran with her main rivals to the first shooting and used only one additional cartridge on it.

The main loser on this line was the Norwegian Carolina Knotten - due to the penalty loop, she dropped to 18th place.

After the shooting, Pavlova, together with Italian Lisa Vittozzi, French Anais Bescon and Estonian Tully Thomingas, formed a leadership quartet, which came off ten seconds.

But the stand forced the Russian woman to move back - she made three mistakes and hardly corrected her mistakes.

The gap from Vittozzi increased to 20 seconds, and the German Vanessa Hinz and the Swedish Johanna Scotheim ran out ahead.

Pavlova did not sit behind other people's backs and began to work at a distance, and this bore fruit - the Russian woman passed the baton right after the second Khintz who was running.

Akimova was lucky that Italy and Germany also chose not the fastest athletes for their second stage.

She was opposed by Federica Sanfilippo and Ioannina Hettich, who fled with the Russian woman.

All three worked equally well on the bench, after which the Italian suddenly began to lag far behind.

Before the next shooting, she won against Akimova and Hettich only ten seconds.

The shooting qualities of Sanfilippo were also no longer up to par, and because of three misses, she let the German and the Russian forward.

True, the Frenchwoman Anais Chevalier-Boucher was also located between them - she was able to rise from fifth place to second without additional patrons.

But she ran not so well - both Akimova and Hettich passed their stages seven seconds earlier.

For the German national team, Denise Herrman entered the fight, and for Russia, Svetlana Mironova.

After prone shooting, Mironova was able to recoup a little, but then Herrman again continued to slowly increase the advantage.

The second time, this acceleration was not in vain - the German biathlete had to be delayed because of two uncovered targets, and Mironova was released after the first and only doppatron.

At the distance, Herrmann was still a little stronger and by the end of her stage she was four seconds ahead, but globally the situation in the race did not change - Russia and Germany were still fighting for victory, not paying attention to other teams.

At the fourth stage, everything was decided by the confrontation between Ulyana Kaisheva and Franziska Preuss.

They both did not try to resolve issues at a distance, but waited for each other to misfire at the shooting range.

After the first approach, nothing changed - the athletes quickly and accurately closed the targets.

Together they reached the final firing line.

No mistakes from @PreussFranziska and Uliana Kaisheva, making sure 🇩🇪 and 🇷🇺 hold on to the lead in this women's relay!

Here Kaisheva's phenomenal sniper series in the relays was interrupted - she never missed at her stage in all three previous races.

But she used two additional cartridges much faster than Preuss with just one.

The Russian woman returned to the track 8.6 seconds earlier, while the Frenchwoman Julie Simon, who won the last two mass starts, was third and was only 13.8 seconds behind.

Kaisheva did not allow her rivals to hope for victory.

On the last lap, she broke even more from her rivals and brought the Russian team the first victory in the relay in two years.

If it were not for the pandemic, then Kaisheva could well have finished with the Russian flag, which would have been conveyed by one of the spectators - the separation from Preuss would have been enough for this.

Victory for @russianbiathlon in the 4th women's relay of this winter!