Feelings, anger, sorrow and joy, mixed flavors... See all the lives of the 2020 Super League in one article

After nearly four months of swords and swords, the special season of the Chinese Super League in Jiangsu Suning's championship is dying.   The moment the dust settles, the joys, sorrows and sorrows that belong to this season will always be frozen. There are countless elements in the super drama of 2020.   This article will use 2655 words to tell you the faces of all beings during the season. T 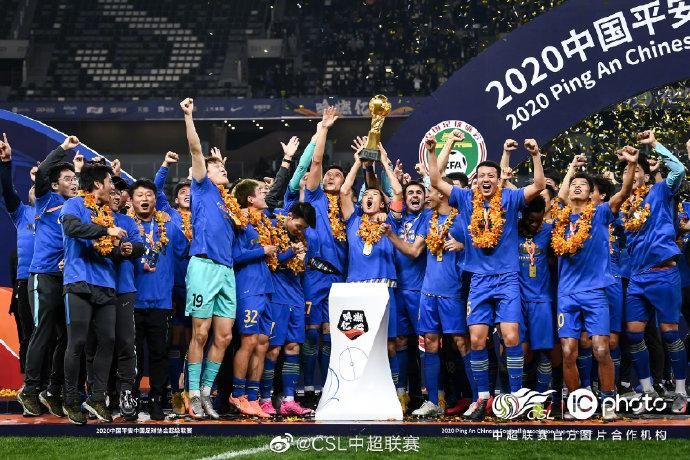 After nearly four months of swords and swords, the special season of the Chinese Super League in Jiangsu Suning's championship is dying.

The moment the dust settles, the joys, sorrows and sorrows that belong to this season will always be frozen.

There are countless elements in the super drama of 2020.

This article will use 2655 words to tell you the faces of all beings during the season. The estimated reading time is 7 minutes.

Serie A runner-up, UEFA Cup runner-up, Women's Super League runner-up, S10 runner-up... When the outside world "expected" Suning's sports team to swipe the card for five consecutive years, Wu Xi and his teammates did not agree.

Not only did they not agree, they also attacked Guangzhou Evergrande 2:1 and won the first Chinese Super League trophy in team history.

The special season where everything is possible, at this moment, Suning has made the most eye-catching brand.

To describe Suning this season with "hidden merits and fame" can't be more vivid.

It is reported that before the start of the season, Jiangsu Suning has teamed up with seven mid-lower teams including Qingdao Huanghai, Shijiazhuang Yongchang, and Wuhan Zall to support the cancellation of relegation this season.

It is precisely because of this low profile that Suning, who is hidden in the "poor students", has always been the one with the least sense of existence when compared with the top three champions such as Evergrande, Shanghai SIPG and Guoan.

Even in front of Suning, it is necessary to list Shanghai Shenhua and Shandong Luneng.

But in the end, everything turned into a brilliant glory.

This low-key and pragmatic, like the temperament and vigor of Jiangsu people.

TEDA wins and relegation drama, unprecedented, I am afraid that there will be hardly anyone.

Of course, in terms of low profile, Tianjin TEDA is the only one in the Super League this year.

In the first stage, 14 games were not won, but in the second stage, it was reborn immediately.

In the first stage, they had a two-round confrontation with the Shenzu who had won 5 wins in Group A. TEDA first won the first win of the season with a 2:0, and then relegated with a 1:1 draw.

Before the season, the outside world's ridicule about the "one win and relegation" of the competition system was transformed into reality in TEDA.

This is like a "child from another family" who didn't usually study well in student days, but can get good grades in the exams.

It seems careless, but in fact it is better than anyone... No way, Tianjin TEDA, to deal with all kinds of dissatisfaction.

Benitez anxious on the sidelines.

In addition to Shenzhen Kaisa, who has achieved TEDA's "one win and relegation" feat, the other team who has given TEDA a precious victory is the Dalianese under the command of the famous coach Benitez.

If you talk about serving as a "background board", Dalian people are serious this season.

In the first game of the season, Fellaini, who has recovered from the new crown, scored twice. In the first stage, he continuously "helped" Deepfoot and R&F to bottom out. The end of the season was reversed by R&F with a 3-goal lead... Dalian football for young people is experiencing the pain of renewal.

As another host besides champion Jiangsu Suning, the 12th place in the Chinese Super League is obviously not ideal for Dalian, who also has a good configuration.

Whether the pain under Benitez’s "Youth Storm" can bring a bright future for this football city, at least it is not yet clear.

Yu Hanchao (right) and other veterans have played a great role in Shenhua this season.

Unlike the Dalian team, which uses a lot of young players, Cui Kangxi's Shanghai Shenhua is acting like an "old boy" crazy.

A group of "old guns" on the stadium for a long time, during the season, more than once dedicated a tough and tenacious game.

If it were not for the less luck, the double foreign aid Shenhua might have eliminated Shanghai SIPG in the 8-in-4 match and faced Jiangsu Suning in the semi-finals... If this assumption holds, then the Chinese Super League’s “story” is very likely. It is very different from today.

The slogan of "All-China Class" has existed in the Super League for many years. With many foreign aids missing and leaving the team, Shanghai Shenhua has become a practitioner of the "All-China Class" and kept the championship even under extremely unfavorable circumstances. Group quota.

Before losing to Jiangsu Suning, Guangzhou Evergrande had maintained a stable and extremely dominant performance.

When Zeng Cheng, Feng Xiaoting, and Yu Hanchao stood up for Shanghai Shenhua at critical moments, and relied on them to achieve the first stage of the dynasty Guangzhou Evergrande, I don’t know what it was like.

After failing to qualify for this season's Super League championship, I don't know that Guangzhou Heng Conference will not miss those former dynasty founders.

I have to say that Guangzhou Evergrande paid the price for its youth, which is not only reflected in the lineup, but also in Cannavaro.

The road to success has always been difficult, and perhaps this setback can make the "Wei Shihaos" tougher and more mature.

As Suning, SIPG, and Guoan are about to enter the renewal stage, I believe that the young generation of Evergrande will one day be alone and crowned the "Nine Crowns."

The refereeing problem continues to heat up as the season progresses.

In the Super League 2020, of course, the issue of refereeing cannot be avoided.

Even in many rounds, the debate over the league's whistle-blowing scale has gone beyond the outcome itself.

Due to the epidemic, the Chinese Super League did not hire foreign referees at the beginning of the season.

But looking at the first stage, almost every round of competition, there will be doubts about domestic referees.

The pressure of public opinion, with the advent of the second phase of the Beijing-Luzhou war, was bled to the apex.

In order to make the second stage of the game more fair and orderly, the Chinese Football Association under great pressure hired two South Korean referees, Gao Hyungjin and Jin Xikun, to enforce the law, and the two shoulder the heavy task of fighting the fire.

Looking back now, the two South Korean referees took over the whistles for most of the focus of the second stage. Although their performance has fluctuated, they are basically quite satisfactory.

The Football Association and the League also reflect their growth in the crisis.

As for the "unlucky" Luneng, the competitive stage, "seeing success or failure in life is heroic. It's just starting from scratch."

Caldeck (first from left) is a representative of practical foreign aid in the Super League.

The Chinese Super League has been fighting year after year. Every season, fans will always guess and look forward to the emergence of the "dark horse".

In the first stage, he entered the championship group with a turbulent 6-game winning streak, won Shanghai Shenhua in a penalty shootout, and turned 4 goals but fell in a penalty shootout with Luneng, ranking 6th in the Chinese Super League. Team Chongqing Modern is undoubtedly the "dark horse" with good condition this season.

Relying on practical foreign aid such as Caldeque, Marcinho, Fernandinho, and a group of little-known domestic players, Chongqing Contemporary, which ranks third in the Chinese Super League, has played the most practical and cost-effective football.

In the Chinese Super League in the post-Jinyuan era, they are role models.

Draw with Beijing Guoan and Shanghai SIPG, once ranked third in Group B after three consecutive victories... But the good times are not long.

Due to a foreign aid injury, Yongchang fell out of the championship group at the end of the first stage, and continued to fall in the second stage.

This civilian team, whose value is lower than that of the Changchun Yatai team in China, still failed to escape the bad luck of relegation.

Some people say that Yongchang is like the life of ordinary people. They have never experienced the rich luxury of Shanghai SIPG, nor have they enjoyed the invincible glory of Guangzhou Evergrande. Some are just the ups and downs and unwillingness in life failures, and then do their best. Keep your passion for life and be brave to believe in the future.

In the battle of life and death, Teixeira scored the second goal for Suning.

Football is life. The scenes of the 2020 season are like the different lives that all kinds of people are experiencing.

The five flavors are mixed, taste bitter and hot, sour and sweet.

Laughter and tears are temporarily sealed.

Looking forward to next year, I look forward to the early return of the league to the home and away league system and restore the cost.

In the final analysis, football and the Super League should participate in more people's lives.