The Spanish team resolved by fast track their second friendly preparation against Ivory Coast (79-62). It should be the most 'serious' test of the two he will face in Malaga 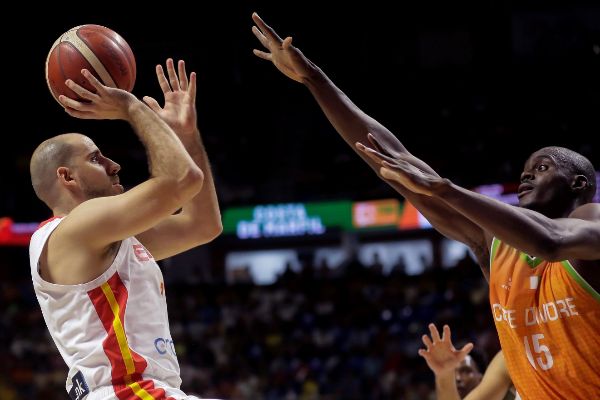 The Spanish team resolved by fast track their second friendly preparation against Ivory Coast (79-62). It should be the most 'serious' test of the two he will face in Malaga, but the African team broke up between his fingers as soon as he squeezed his hand. Before arriving at the break, the difference was already flirting with the twenty points and Spain, which focused its attention on refining the defense, ended up being carried away in the final minutes.

The result was soon clear, but the game did allow taking notes. To verify that Ricky Rubio has arrived in a state of exquisite form. The base of El Masnou, who was already the most prominent against Lithuania, was again the top scorer with 14 points, although even better than the numbers are the sensations: he is seen free, inspired, wanting to run and, what more will need the selection this summer, to take gallons. He's prepared.

And like him the Hernangómez brothers. After a discreet season in the NBA, the two use the summer with the national team as a springboard for a key year for their future. Willy , the other great standout against Lithuania, again demonstrated how fine it has come (14 points, 6 rebounds). In China, without Pau Gasol , it will be the only interior reference in Spain with Marc .

And in that idea his brother Juancho enters. The Madrid is that 'four' that is so good for this selection: athletic and very active in defense, able to widen the track in static and run when Spain is open field. In a team that won't be as strong in the melee as Marc could be, that predisposition to run is even more important. Juancho, who this week received a visit from Nuggets coach Mike Malone and Arturas Karnisovas , general manager of the franchise, claimed 13 points.

A test of that outermost face of the Spanish team left the balance of shots: 33 pitches of two by 30 triples. Threat from the outside to open the inside to Marc, Willy and the eaves cuts like Juancho and Claver . Marc Gasol, by the way, who played his first minutes against Ivory Coast. The center of Sant Boi needed a few more days of preparation after a very long year in the NBA and had a quarter of an hour to catch up. You will still need more filming.

Notes of a match that should be the most 'demanding' of this home run and that was left with no more history ahead of time. Ivory Coast played with great intensity back and in the best case it translated into a sticky defense. In the worst, as soon as Spain moved the ball (and with Ricky and Quino Colom in command it is more than ready) the cracks came out. Ivory Coast lasted for the duration of Deon Thompson , who scored 10 of his first 16 points. The Californian has done two years so good in San Pablo Burgos that this summer he has signed for two teams: Unicaja and Ivory Coast. And you know, the American who gets a passport 'cotonou' has a treasure.

InterviewLlull: "The ghosts of the injury are already buried"