The four years in hell in Haitz, harassed by teenagers in his town: "My son has the right to go out"

Haitz, an 18-year-old with special educational needs, is terrified in his own town. Periodically harassed by teenagers, tucked in by his mother and the ... 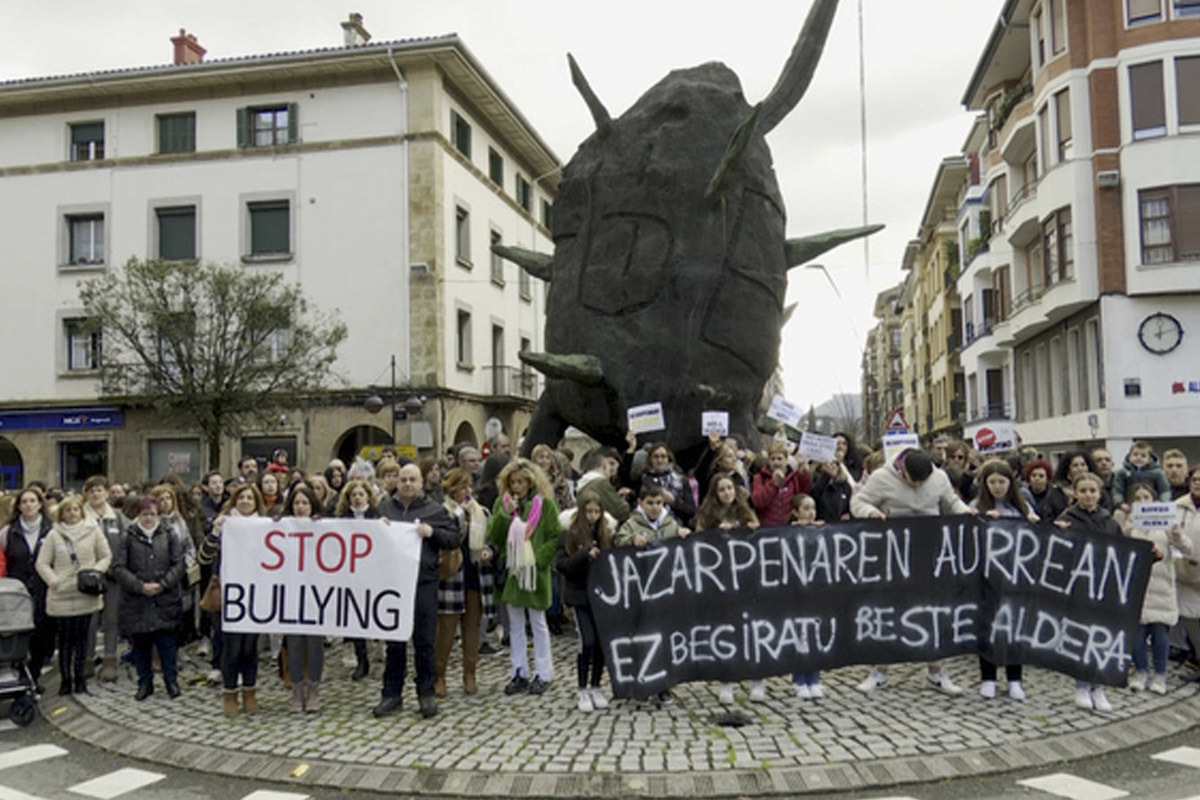 , an 18-year-old with special educational needs, is terrified in his own town.

, supported by her mother and her co-workers, Haitz has become a symbol for Amorebieta (Vizcaya).

Groups of young people, almost children, are dedicated to insulting him, chasing him and threatening him as part of a cruel game.

Itxaso Goitia, his mother, his colleagues from the Lidl supermarket, the City Council with the Councilor for Well-being Ainhoa ​​Salterain, directors of schools and ikastolas and hundreds of neighbors defend their right to live in peace without fear of being cornered.

The young man who suffers from an

went to a kebab located on Gudari street in Amorebieta.

Itxaso, his mother, stayed in a nearby bar and Haitz practically only had to walk 300 meters in his town, the town where his parents and grandparents also live.

But, upon detecting his presence,

a group of between 20 and 30 teenagers began to persecute him .

Haritz, frightened after nearly four years of bullying, ran to his mother's support with the group of teenagers trailing behind him.

"When Haitz entered the bar, they entered behind him and began to insult him," Janire Zárraga, Itxaso Goitia's colleague at the Lidl supermarket, explained after the incident and who acted as spokesperson in the massive response from the residents of Amorebieta after the last assault suffered by this young 18-year-old from Biscay.

Itxaso, co-workers such as Janire and also municipal officials such as the Councilor for Well-being and candidate for Mayor of Amorebieta Ainhoa ​​Salterain demand greater social involvement in the face of the harassment suffered by Haitz.

," denounced Janire Zárraga last Sunday in front of the half a thousand residents who demonstrated through the streets of Amorebieta in an act of solidarity promoted by the Lidl workers.

in a municipality of almost 20,000 people that emerges in the conversations of the La Amistad bar, a place from which Haitz was seen fleeing from his pursuers while seeking maternal help.

"There is no right and all this will only stop when the Ertzaintza takes two or three rioters to the police station," Mikel points out while he drinks a coffee with milk.

One possibility, that of the arrest of a teenager, that Haitz's own mother came to warn other Amorebieta parents hours after the attack.

"The complaint is filed, everyone who has children please have a chat with them because maybe one day they will knock on your door to tell you that you have a complaint," Iratxe Goitia warned on social networks in a first warning appealing to the responsibility of The parents .

"My son has the right to go out into the street," Haitz's mother repeated after the attack and in the week prior to the march in which slogans such as

Her classmate and friend Janire Zárraga also acknowledged having been a victim of bullying "because she is fat."

"I kept silent out of fear and I have had that wound for 30 years: now I still see that boy (because of his stalker) and I tremble," he acknowledged before families with small children, parents of adolescents and older people who, defying the cold, accompanied Itxaso Goitia .

Among those who attended the march was also Ainhoa ​​Salterain, the councilor who in May 2021 decided to raise the concern of those responsible for schools in the municipality so that the

entire town would be involved in

"We are talking about 1% of the almost 2,800 adolescents who live in Amorebieta but their behavior is very striking, horrific," assumes Salterain, who activated the joint work of the City Council with schools and youth groups to tackle an ambitious project that has culminated a first diagnosis after analyzing the 700 surveys carried out on students, mothers and fathers and teachers.

Salterain confirms that the diagnosis made in Amorebieta does not incorporate relevant differences in the values, hobbies or 'hobbies' of Biscayan adolescents compared to those from other parts of the Basque Country or the rest of the State.

Half a million schoolchildren are suffering bullying in Spain

, according to the president of the Spanish Association for the Prevention of School Bullying (AEPAE) Enrique Pérez-Carrillo.

The author of 'Bullying kills' maintains a very critical vision of how the administration is acting in the face of a colossal problem.

"It is a fraud", Pérez-Carrillo repeats, noting that 9 out of 10 protocols opened for complaints of assaulted "are closed falsely", there is a lack of resources and means to face a problem that penalizes schoolchildren with fewer resources and victims more exposed are at great risk of committing suicide.

"It's all a real nonsense," he laments after supporting the family of Kira López, a 15-year-old girl from Sant Andreu who committed suicide after allegedly suffering harassment in the classroom.