World: place in the quarters with seven regulars ... and Morocco as a guest

Morocco invites itself to the feast! The big nations have carved out the lion's share in the quarter-finals of the World Cup-2022, with enticing shocks on Friday and Saturday, such as England-France or Netherlands-Argentina,… 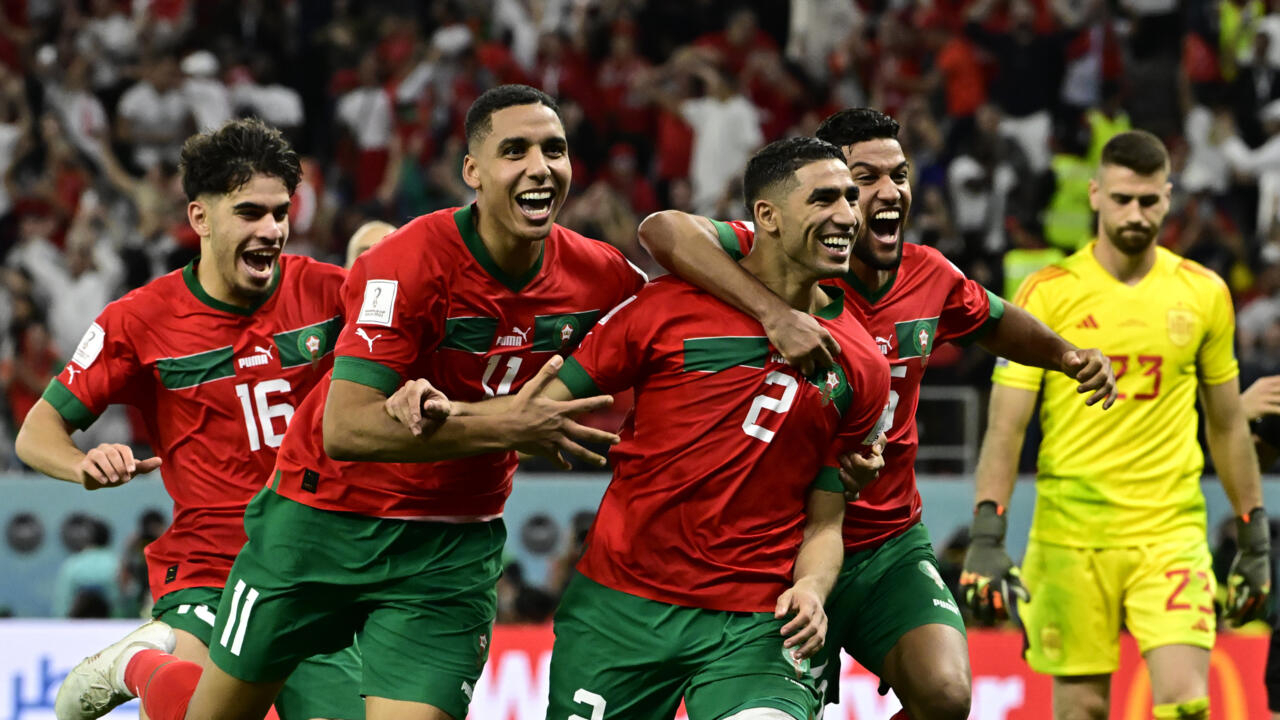 Morocco's historic penalty shootout victory against Spain on Tuesday (0-0 aet, 3 pens to 0) upset a final table where, until then, the big nations had held their rank, from Brazil to Argentina. via France or Portugal, which crushed Switzerland (6-1).

With Cristiano Ronaldo on the bench at the start of the game, it was young Benfica striker Gonçalo Ramos who shone with a hat-trick.

In line with the early eliminations of Belgium (2nd in the world) or Germany (11th) in the group stage, the exit of Spain (7th) confirms that this atypical World Cup in its calendar, its programming and its geography still holds surprises.

This is a historic achievement for Morocco, which equals the best performance of an African nation at the World Cup and can now hope for an unprecedented last four.

"It's historic for Morocco, it's historic for Africa. We said we had come to represent Africa, we saw that our level had increased", savored the Moroccan coach Walid Regragui at the microphone from BeIN Sports.

In 2018, the quarters had come down to a showdown between Europe and South America.

Four years later, Morocco broke this duopoly, even if the number of qualified European nations (5 out of 8) fuels the risk of seeing the stranglehold of the Old Continent continue, as in each edition since 2002.

The Brazilians Neymar (d), Vinicius Junior (g), Raphinha (2nd g) and Lucas Paqueta (2nd d) after the second goal scored by Neymar on penalty in the 1/8 finals of the World Cup-2022 against South Korea on December 5, 2022 in Doha © Pablo PORCIUNCULA / AFP

Brazil and Argentina, of course, disagree.

Carried respectively by Neymar and Lionel Messi, the Canarinha and the Albiceleste believe in their chances in this tournament which is undoubtedly the last opportunity for "Ney" or for "Leo" to reach the Grail.

"The World Cup in Qatar is a great opportunity to break European domination," Cafu, a former defender and captain of the Brazilian world champions in 2002, told AFP before the tournament.

After three weeks of competition, Brazil has certainly impressed with its offensive strength and defensive rigor, despite ten days of absence for Neymar, injured in an ankle.

Argentina, it is gaining momentum after its initial and unexpected setback against Saudi Arabia (2-1).

But beware of their opponents in the quarters: Croatia, 2018 world vice-champion and still guided by their playing master Luka Modric, remains a very big chunk on the road to Brazil on Friday (4:00 p.m.).

"It will be a very good match between two historic selections. Unfortunately, one of them will have to leave," commented the Argentine coach.

Van Gaal, semi-finalist on the Oranje bench in 2014, already sees further: "I've been saying it for a year: we can be world champions. I'm not saying we will be, but we can. "

The height of bad luck for the South American nations: in the event of qualification for the last four, Brazil and Argentina will meet in the semi-finals for a revenge for the 2021 Copa América final won by the Albiceleste (1-0).

Saturday, place for a high-flying "crunch" between France, reigning world champion, and England, vice-champion of Europe.

The fans see it above all as a duel between the striker of the Blues Kylian Mbappé, top scorer of the tournament (5 goals) and the center forward of the Three Lions Harry Kane, best passer (3 assists).

"Of course, this World Cup is an obsession, it's the competition of my dreams", reacted Mbappé after his double in the round of 16 against Poland (3-1), admitting to having "built" his season for this objective, "whether physically or mentally".

Can the Blues become the first nation to retain their world title since Pelé's Brazil in 1962?

It will already be necessary to tame the English in the quarters, before thinking of a possible semi-final against the winner of the duel between Morocco and Portugal.