Israeli fighters launched air strikes today on targets in Gaza, in response to a missile fired from the Strip at areas in Israel, according to Palestinian and Israeli sources. A security source in Gaza City said, “Israeli planes fired several missiles at a site in the city of Khan Yunis (Genu). 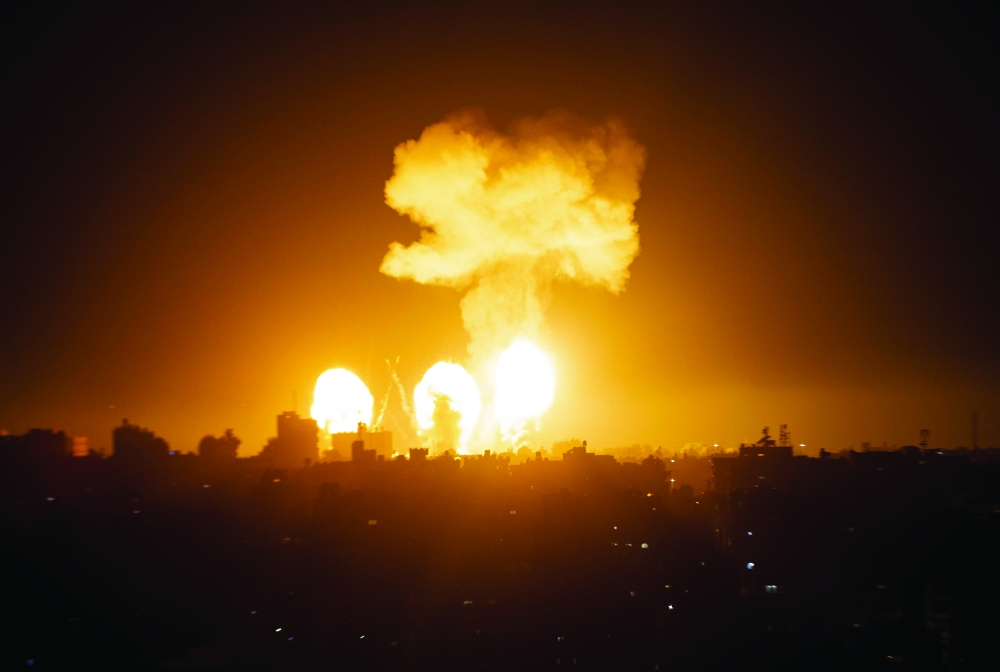 Israeli fighter jets launched air strikes today on targets in Gaza, in response to a missile fired from the Strip at areas in Israel, according to Palestinian and Israeli sources.

A security source in Gaza City said, "Israeli warplanes fired several missiles at a site in the city of Khan Yunis (south), and also targeted an empty land near the airport, south of the city of Rafah, in the southern Gaza Strip."

An eyewitness said that Israeli warplanes also launched a raid on an empty land in the middle of the Gaza Strip.

No injuries were reported in the Israeli raids, according to Palestinian medical sources.

In turn, the Israeli army confirmed in a statement that its fighters “targeted a workshop for manufacturing weapons belonging to the Hamas movement, which constitutes a central location for the production of most of the movement’s rockets.

The warplanes also targeted a Hamas tunnel in the southern Gaza Strip.

The statement indicated that the Israeli raids came in response to the firing of a missile from Gaza towards southern Israel, explaining that it targeted "Hamas' strength and armament building capabilities in the Gaza Strip."

For its part, the Israeli newspaper, The Jerusalem Post, stated that the Israeli raids targeted a Hamas workshop for the production of weapons. The workshop is considered a central production site for many missiles.

It also targeted a Hamas tunnel in the southern Gaza Strip.

The newspaper added that during the strikes, a second missile alert was activated in open areas near the town of Bnei Netzarim, near the border with Gaza.

On Saturday evening, a rocket launched from the Strip landed in an uninhabited area in southern Israel, without causing any injuries or damage, according to what the Israeli army announced in a statement.

No one immediately claimed responsibility for the missile launch.

The missile launch, the first in a month, according to the army, came the day after the death of Palestinian Ammar Hadi Mufleh (22 years old) by Israeli forces bullets at the entrance to the city of Nablus in the northern West Bank, in ambiguous circumstances.

Coinciding with the Israeli bombing, Palestinians fired two more rockets at towns in southern Israel, according to eyewitnesses and Palestinian security sources.

The Izz al-Din al-Qassam Brigades (the armed wing of Hamas) announced in a statement that, "its air defenses responded yesterday at dawn to Israeli warplanes in the skies of the Gaza Strip with surface-to-air missiles and anti-ground missiles."

In Ramallah, Palestinian President Mahmoud Abbas yesterday accused Israel of practicing a policy of "racial discrimination" against the Palestinians.

This came in a televised speech by Abbas broadcast by the official Palestine TV, at the ceremony announcing the results of the winners of the Palestinian certificate of honor for academic diplomacy advocating Palestinian rights.

"Every day, indeed every hour, there are Israeli aggressions and violations against our people, our land and our sanctities," Abbas said.

He added, "The Israeli settlement continues like a cancer in our land, and the settlers wreak havoc on the land and destroy crops and offspring."

In connection with this, Palestinian sources reported that dozens of settlers stormed the blessed Al-Aqsa Mosque yesterday, under the strict protection of the Israeli police.

The Palestinian News and Information Agency (Wafa) quoted the sources as saying, "The settlers stormed Al-Aqsa from the Mughrabi Gate in successive groups, and carried out provocative tours in its courtyards."

According to the agency, “settlers storm the courtyards of the blessed Al-Aqsa Mosque, daily, except for Friday and Saturday, at morning and evening intervals, in an attempt to impose the temporal and spatial division in it.”