“We are now moving faster than ever before to finish the railway network to facilitate movement across the country and encourage international trade.” A pledge made by Etihad Rail officials, employees and workers with the beginning of the new fiftieth year for the UAE, in order for the dream to turn into and 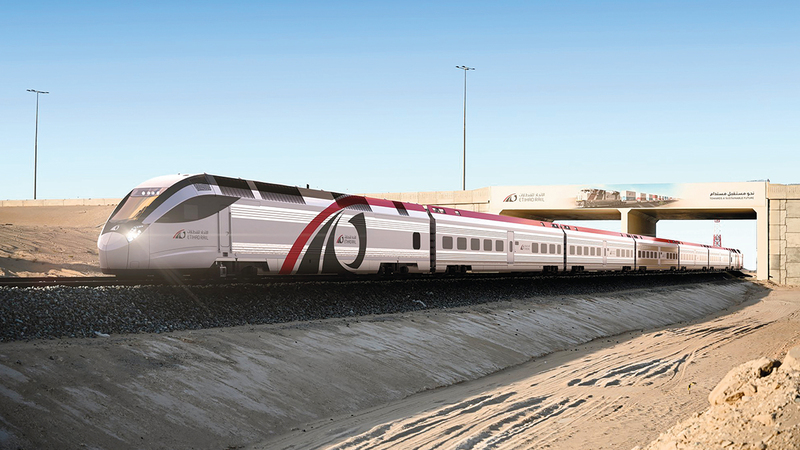 "We are now moving faster than ever before to complete the railway network to facilitate movement across the country and encourage international trade." A pledge made by Etihad Rail officials, employees and workers with the beginning of the new fiftieth year for the UAE, in order for the dream to turn into reality in which we witness the construction of a network Safe, fast and efficient railways, extending 1,200 kilometers across the country, and even going beyond its borders to link the UAE with its neighboring countries of the Gulf Cooperation Council.

The company confirmed that it is racing against time to achieve the goals of the National Railways Program, which was launched by the UAE government within the 50 projects, with an investment value estimated at 50 billion dirhams, to constitute the largest system of its kind for land transport, including goods and passengers at the national level, providing economic opportunities of nearly 200 billion. dirhams, and contributes to providing more than 9,000 jobs in the railways and supporting sectors, through three strategic projects: the first is concerned with “railway services for goods”, and includes the development of the Union train network, linking four main ports, and includes the construction of seven logistics centers in The country serves various trains and businesses, with the aim of raising the volume of freight transportation to 85 million tons of cargo by 2040.

According to the company, the second strategic project is concerned with “railway services for passengers”, by providing passenger trains of European standards that are equipped with the latest and most advanced technologies, in line with the country’s environment and climate, to ensure the provision of high and reliable levels of performance and efficiency, as well as to ensure the availability of all means of comfort and entertainment. And comfortable seats in it, so that passengers can enjoy an “extraordinary travel trip” between 11 cities in the country from the Al Sela region to Fujairah, at a speed of 200 km / h, saving more than 40% of travel time by other means of land transport, by 2030, pointing to One train will accommodate more than 400 passengers, allowing more than 36.5 million passengers annually the opportunity to travel between the outskirts of the country, as they will be able to travel between Abu Dhabi and Dubai in only 50 minutes, and between the capital and Fujairah in only 100 minutes.

The company indicated that the third and last strategic project of the National Railways Program is the "Integrated Transport Service", which includes the establishment of a center for innovation in the transport sector that works to connect trains with networks of light trains and smart transport solutions within cities, to be an integrated alternative that serves all residents and visitors of the country. Creating smart applications and solutions for planning and booking trips, and integrating logistics operations, port and customs services.

The company noted that over the past years, as part of its continuous endeavor to develop the national railway network, it has made great progress by laying rails at a distance of 1,200 km in the UAE, consisting of two million locally manufactured concrete beams, eight million screws and fasteners, and more than From 410 railway bridges and nine tunnels, through more than 27,000 experts, specialists and workers working in more than 3,000 construction sites spread across the Emirates, they have so far accomplished 76 million working hours, using more than 6,000 machinery and equipment, explaining that this national project The giant has the support of 180 government and service agencies, developers and joint stock companies.

100 minutes from Abu Dhabi to Oman

The Etihad Train constitutes a quantum leap in the transportation system in the UAE, within an integrated vision that includes the transport of goods and passengers, as the train will link the emirates of the country with all of them, and in the future it will link the UAE with neighboring countries such as the Kingdom of Saudi Arabia through the city of “Al Ghuwaifat” in the west and Fujairah on the east coast. Thus, it forms a vital part of the regional supply network and the commercial transport movement worldwide.

In addition, a joint company between Etihad Rail and Oman Rail was launched to design, develop and operate a railway network between the two countries that extends over a distance of 303 km, to provide safe and fast services for the transport of passengers and freight, to make movement easy and fast between the UAE and the Sultanate of Oman, through a network of railways. The railway links the state of Sohar with the UAE railway network, and the city of Al Ain as well, as the passenger will be able to reach from Sohar to Al Ain in only 47 minutes, and the train will cover the distance between Sohar and Abu Dhabi in 100 minutes.

A job in the railways and supporting sectors.

A city in the emirates of the country that is linked to the railway network.