Seoul and Tokyo impose sanctions on Pyongyang, the day after a similar decision by Washington

Yesterday, South Korea and Japan imposed new sanctions on North Korea, including individuals and entities, in response to the recent missile tests carried out by Pyongyang, the day after a similar decision by the United States. In detail, Tokyo and Seoul announced yesterday the imposition of new sanctions on Pyongyang. 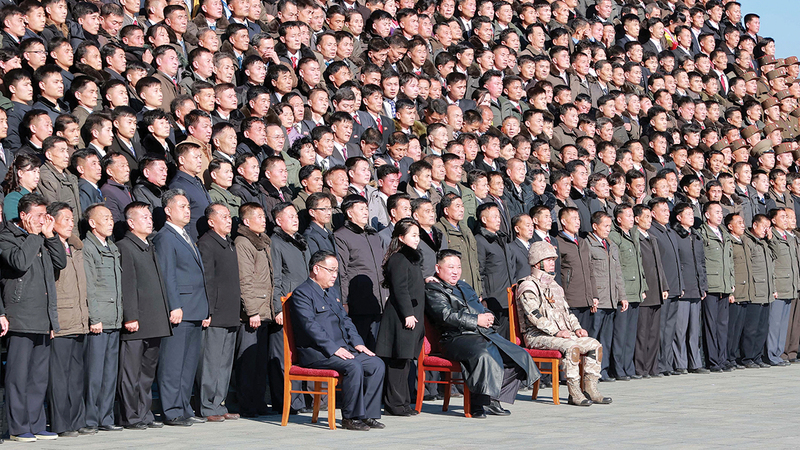 In response to the increasing security threats, it launched missiles

Seoul and Tokyo impose sanctions on Pyongyang, the day after a similar decision by Washington

North Korean leader Kim Jong Un attends a photo session with his daughter after the test launch of an intercontinental ballistic missile.

Yesterday, South Korea and Japan imposed new sanctions on North Korea, including individuals and entities, in response to the recent missile tests carried out by Pyongyang, a day after a similar decision by the United States.

In detail, Tokyo and Seoul announced yesterday the imposition of new sanctions on Pyongyang.

South Korea said it would target eight individuals, including a Taiwanese and a Singaporean.

The South Korean Foreign Ministry said in a statement that these "contributed to North Korea's development of nuclear and missile weapons, and to evading sanctions" previously imposed.

The ministry added that the eight individuals are already subject to US sanctions, considering that the new restrictions imposed by South Korea are supposed to alert "the local and international community to the dangers of dealing with these entities."

The ministry added in a press release that among those added to the blacklist are officials of financial institutions related to North Korea's nuclear and missile programs, and involved in illegal ship-to-ship transfers of sanctioned North Korean goods.

For its part, Japan announced that it had decided, in response to Pyongyang's "provocative actions", to freeze the assets of three North Korean groups, namely the Korean Haegumgang Trading Company, the Korean Namgang Trading Company, the Lazarus Group and one person, for their participation in North Korea's nuclear and missile development programs.

Japanese Chief Cabinet Secretary Hirokazu Matsuno said during a press conference that Pyongyang's missile tests, which are taking place at an unprecedented pace this year, are "grave and imminent threats" to Japan and the international community.

The South Korean and Japanese sanctions come the day after Washington announced Thursday the imposition of economic sanctions on three North Korean officials for supporting "the development of weapons of mass destruction and ballistic missiles," as stated in a statement by the US Treasury Department.

The measures to freeze any of their assets target North Korean Workers' Party officials Jun Il Ho, Yu Jin and Kim Su Gil, who are believed to be directly involved in weapons development.

The ministry statement said that Jeon Il Ho and Yu Jin had key roles in the development of weapons of mass destruction in North Korea, while serving as deputy director and director, respectively, of North Korea's munitions industry department.

The statement also said that Kim Su-gil served as director of the General Political Bureau of the Korean People's Army, from 2018 to 2021, and supervised the implementation of decisions related to the weapons of mass destruction program.

The US Treasury also threatened to impose sanctions on anyone dealing with the three officials.

The statement quoted US Assistant Secretary of the Treasury in charge of Terrorism and Financial Intelligence Brian Nelson as saying that these officials "played a leading role in North Korea's illegal programs of weapons of mass destruction and ballistic missiles."

"The recent launches demonstrate the need for all countries to fully implement UN Security Council resolutions, which are intended to prevent North Korea from acquiring the technologies, materials and revenue that Pyongyang needs to develop banned weapons of mass destruction and missile capabilities," he added.

For his part, Secretary of State Anthony Blinken said, in a statement, that the recent operations of North Korean missile launches, including the test of an intercontinental ballistic missile, with a range reaching the mainland United States, “pose a major security threat to the region and the entire world.”

He added that the sanctions "confirm our permanent determination to enhance accountability in response to the frequency, size and range of ballistic missile launches."

"The measure was taken in coordination with South Korea and Japan, the two allies of the United States," the US minister said, noting that the European Union imposed similar sanctions on the three officials in April.

US National Security Adviser Jake Sullivan said earlier Thursday that Washington is committed to using pressure and diplomacy to get North Korea to give up its nuclear arsenal.

The latest round of US sanctions in October targeted two companies registered in Singapore and a company registered in the Marshall Islands that Washington said supported Pyongyang's weapons programs and military.