Putin: Striking the Ukrainian infrastructure is "inevitable" and the West's support for Kiev is devastating

Russian President Vladimir Putin announced yesterday that the intensified Russian strikes on the infrastructure in Ukraine are "necessary and inevitable," denouncing Western policies supporting Kiev. And while Ukraine announced that it would limit the activities of religious organizations affiliated with Russia on its soil, the president said 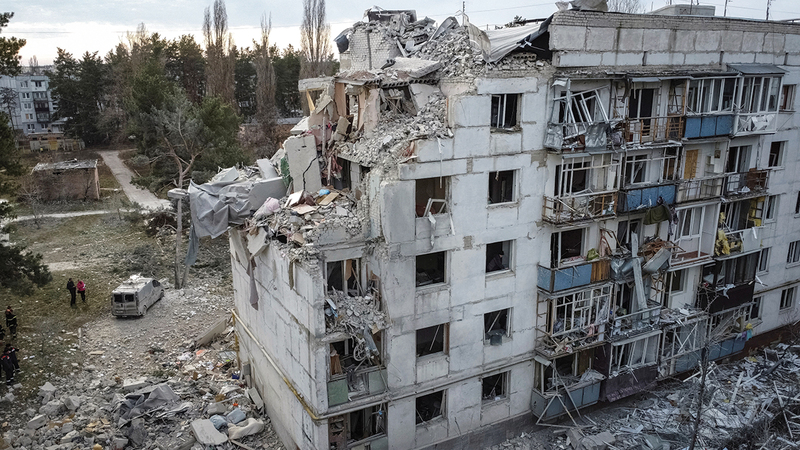 Putin: Striking the Ukrainian infrastructure is "inevitable" and the West's support for Kiev is devastating

A residential building near the town of Chuhiv, Kharkiv region, was damaged by a Russian missile attack.

While Ukraine announced that it would limit the activities of Russia's religious organizations on its soil, Finnish Prime Minister Sanna Marin said that the war in Ukraine showed that Europe was "not strong enough" to stand alone in the face of Moscow.

The Kremlin said in a statement issued after a phone call between Putin and Schultz, the first since mid-September: “It was noted that the Russian armed forces avoided high-precision missile strikes on some targets in Ukraine for a long time, but these measures have become necessary and inevitable in the face of attacks.” Provocative Kyiv».

The Kremlin added that Putin had told the German chancellor that the approach taken by Germany and the West on Ukraine was "devastating" and urged Berlin to rethink it.

He added that Putin had defended Russia's missile strikes on targets in Ukraine and indicated that Moscow should be allowed to participate in investigations into what he called "terrorist" attacks on the Nord Stream gas pipelines that pass under the Baltic Sea.

In Kyiv, Ukrainian President Volodymyr Zelensky announced that Ukraine would limit the activities of Russia's religious organizations on its territory, and would reconsider the status of the Orthodox Church of the Moscow Patriarchate.

Zelensky said in a video recording of his evening speech that the National Security and Defense Council has instructed the government to propose to the Ukrainian parliament a bill that would make it impossible for religious organizations affiliated with the centers of influence in Russia to carry out activities in Ukraine.

These measures come in the wake of raids carried out by the Ukrainian security services in November in the main monastery in the capital, Kyiv, the residence of the head of the Ukrainian Orthodox Church, and a number of other places of worship, due to suspicions of links with Moscow.

Meanwhile, Finnish Prime Minister Sanna Marin said yesterday that the Russian war on Ukraine showed that Europe relies heavily on the United States for its security.

“I have to be very honest with you, Europe is not strong enough right now,” she told the audience at the Lowy Institute.

We would be in trouble without the United States.”

She added that she had spoken to several US politicians who said they believed Europe should be stronger.

"The United States has provided a lot of weapons, a lot of financial aid, a lot of humanitarian aid to Ukraine, and Europe is not strong enough yet," Marin said.

In Berlin, the German government website reported that it is preparing to deliver seven Gibbard tanks to Ukraine, in addition to the 30 air defense tanks already used to fight the Russian army.

For its part, the German Federal Authority for Technical Support to Ukraine supplied hundreds of electricity generators.

In Kyiv, Ukrainian presidential advisor Mykhailo Podolak told a Ukrainian television network yesterday that his country's armed forces have lost between 10,000 and 13,000 soldiers so far in the war with Russia.