Citizen farmers have succeeded in producing organic vegetables and fruits, high-quality bee honey, in addition to dairy and poultry products, all with Emirati hands, assuring that the food security of their country will be achieved with their hands, thanks to the support of the leadership for them. 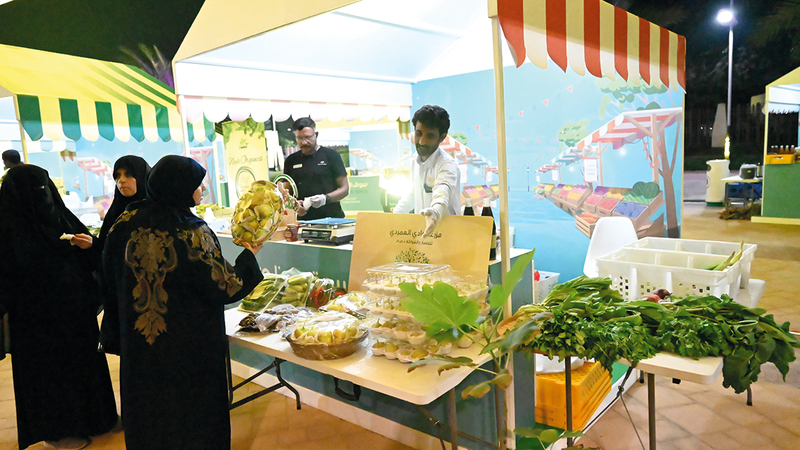 Organic vegetables and fruits, milk and honey are handcrafted by Emirati hands

Citizen farmers have succeeded in producing organic vegetables and fruits, high-quality honey, in addition to dairy and poultry products, all with Emirati hands, stressing that food security for their country will be achieved with their own hands, thanks to the support of the leadership.

Citizens participating in the farmers' market in Dubai told Emirates Today that they worked to study the possibility of growing vegetables and fruits in the local environment, and succeeded in cultivating plants grown for the first time in the country, which enabled them to produce exclusively Emirati crops and fruits, competing in quality with the best fruits. In the world.

Dubai Municipality confirmed that it provided all facilities to the citizens participating in the initiative, and provided them with free platforms and logistical support, such as marketing their products, as well as involving home business owners in the initiative, pointing out that the "Farmers' Market" initiative, a free social and investment agricultural platform, aims to Gathering citizen farmers in one place, selling farm, organic and local produce directly to consumers.

Farmer Tariq Abdullah Al Falasi said that he was keen to diversify the agricultural crops on his farm, and succeeded in producing “eggplant, lemon, onion, mint, watercress, coriander and parsley” with high quality, stressing that the land of the Emirates is fertile and suitable for all types of crops, indicating that he intends to grow species that were not cultivated in the country. Before, to achieve food security for the country in the hands of his sons.

For his part, citizen Bakhit Muhammad Al-Muqbali stated that the land of the Emirates is fertile, and gives crops and products that compete with imported ones in quality, explaining that he produces dates, fruits, vegetables and bee honey, all of which are from the good of the Emirates, and in the hands of the people of the Emirates.

He said that food security will be achieved in the hands of the people of the Emirates, with the support of the leadership, appreciating the role of Dubai Municipality in providing them with a free platform to display their products.

The citizen, Naima Muhammad Ali, confirmed that she provides her community with dairy and poultry products, in addition to saffron, thanking Dubai Municipality for its support, and for providing the opportunity for citizen farmers and producers to display their products.

Citizen Khaled Muhammad Al-Kaabi stated that he participates in various types of high-quality Emirati honey, which has high health benefits, pointing out that local agriculture is witnessing great growth and prosperity during the recent period, thanks to government support for it, and it also competes with imported products greatly, stressing that security The food for the country will be achieved by the hands of the people of the country.

Citizen Khalfan Muhammad Al-Nuaimi stated that he succeeded in cultivating and producing a rare type of "yellow" watermelon, stressing that he decided to face the challenges posed by nature and climate, and to grow rare fruits, so that he could eventually provide a high-quality crop to society, competing with the best products in the world.

He said that the Emirati citizen overcomes challenges with knowledge and study, stressing that the country's food security will be achieved by the hands of its people, calling on everyone who wants to go through the agricultural experience to turn to it without hesitation, to contribute to supporting the country's national strategy.