Technological supremacy in the 21st century, Ukraine and China: the three axes of the romance between Biden and Macron

Ukraine, China, and technology. Those are the three points of Emmanuel Macron's visit to Washington, where this Wednesday he was received at the White House by Joe Biden, with ... 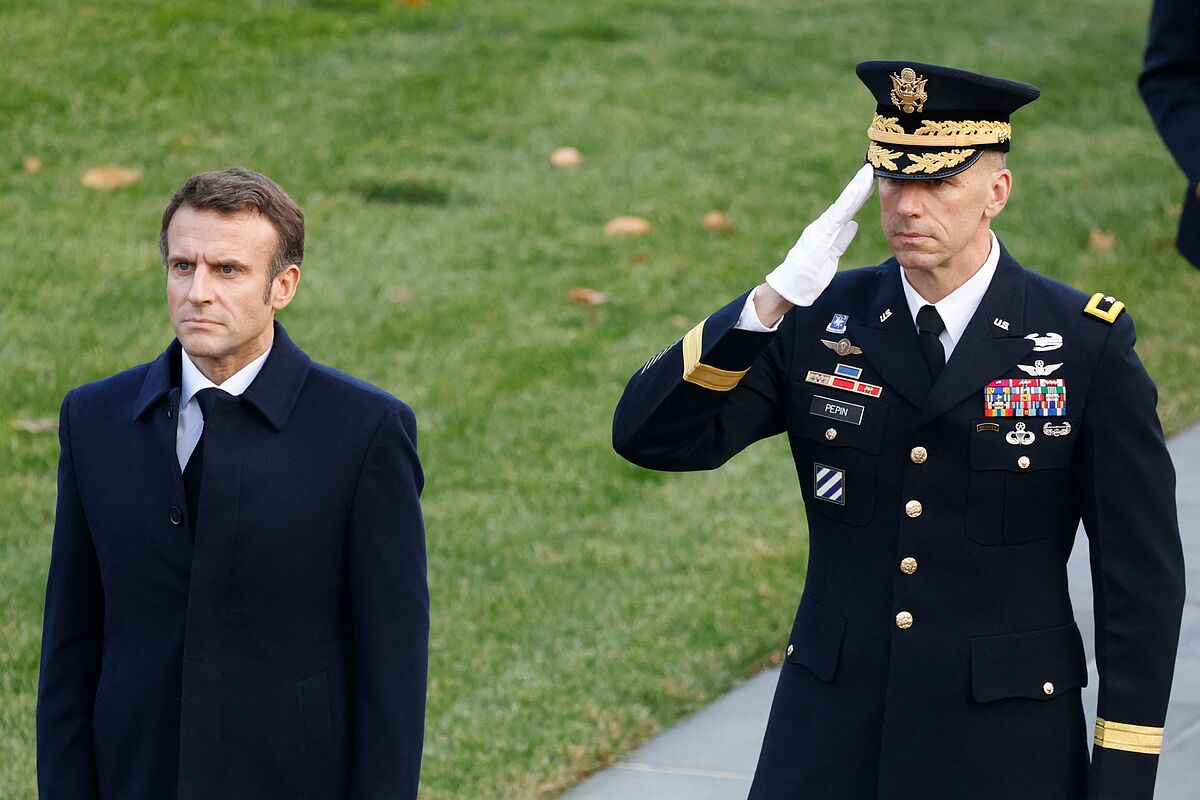 Those are the three points of Emmanuel Macron's visit to Washington, where he was received at the White House this Wednesday by Joe Biden, with whom he will meet this Thursday.

It is a meeting of the highest level.

In fact, this is

the first state visit for the current US president

A state visit is a meeting at the highest level in the White House, which includes all ceremonial paraphernalia designed to convey the idea that between the two countries there is, more than good relations, a true alliance.

But it does not seem that Macron's election is a coincidence, despite the fact that he and Biden have good personal chemistry that has led them, at the United Nations General Assembly in September,

to extend a meeting that was scheduled to last to 45 minutes .

, to the despair of their respective teams, who saw how the agendas of both leaders were blown up simply because of the

among these (given the attention given by Biden to Pedro Sánchez at the 2021 NATO summit, it seems unlikely that this organizational problem would arise in an eventual meeting between the Spanish and US presidents).

Good chemistry is so important - with Macron even sending Biden a handwritten note for his 80th birthday and his granddaughter's wedding - that nothing important will come of this summit.

Nothing except stage performance.

And that is relevant.

Because if Biden has given Macron the honor of a state visit, it is because the United States considers France the leader of Europe.

It is a geopolitical tectonic movement, which is not only due to the personality of the French president, but also to the perception that Washington has of the Old Continent.

Great Britain has marginalized itself by leaving the European Union and, until the Second Coming of Queen Victoria awaited by Brexit supporters, which allows the restitution of the British Empire, London will have to assume that its ability to influence in The US, although great, is not what it used to be.

And then there is Germany,

a country with an economic role far larger than its political

one, but one that has seen its stature dwindle with Chancellor Olaf Scholz's constant dithering and back-and-forth in the Ukraine war.

If with Angela Merkel Jake Sullivan -Biden's influential National Security Adviser- feared that Berlin would slide down the slope of mercantilism, and try to renounce the strategic responsibilities of the world's fourth largest economy to try to be a kind of Luxembourg but in a big way, with Scholz it seems that Germany is simply lost.

Add to that the fact that Secretary of State Antony Blinken grew up in France, with a French adoptive father, speaks Molière's language as well as Shakespeare's, and it's not just that he has the Legion of Honor, but also she has been handed over to her mother, and the romance between Washington and Paris is guaranteed.

A romance that Macron undoubtedly hopes will end better than the one he began with Biden's predecessor, Donald Trump,

with whom he also had the first state visit of the mandate.

of the American president.

Macron landed in Washington in 2017. He and Trump even planted a tree at the White House, in a ceremony that made it clear that forestry was not their thing, to celebrate the friendship between the two nations.

And a day after he left, Trump tore up the Iran nuclear deal, which the French president had pleaded with him during his visit to uphold.

In fact, Biden already gave France the usual slap in the face in advance, in September 2021, when he established the AUKUS, a nuclear alliance with Great Britain and Australia that meant for France

the loss of a contract of 80,000 million euros in submarines.

for the country of Oceania, which will go from being built by a French company to an American one.

Macron reacted in the best French style: with a fit of indignation, perhaps because US diplomacy decided to make it public just on the day a ceremony was scheduled to commemorate the alliance between the French and US Navies (this is what is called having good diplomatic tact).

But, after withdrawing the French ambassador in Washington, Macron decided to forget the incident, among other things because he could not do much else.

, in French, sounds good, but

in English defeats it by far.

Which leads to the meeting on Thursday - with Biden - in which there will be three main topics.

In two of them, although the US and France are on the same wavelength, they do not agree on everything.

Or, as one US diplomat put it this week,

"we are allies, but we are not aligned."

The most obvious is Ukraine.

France has given large-scale military and economic support to the kyiv government, including CESAR howitzers, which have decimated Russian troops on the eastern and southern front lines.

But Macron continues to try to maintain an open channel of communication with Vladimir Putin, something that many in Washington believe is, more than anything else, the French president's most characteristic trait: arrogance.

Nobody in the US believes that Putin will listen to Macron, but the general opinion is that, with his efforts to get closer to the Russian dictator, the French president allows Moscow to maintain his narrative of a "negotiated solution" to the conflict that Russia itself initiated.

For the Biden government, negotiations with Russia make no sense, since Moscow only proposes them when the war is going badly for it, and it combines those opening offers with the systematic bombing of all Ukrainian civilian infrastructure.

Sullivan has cut short the proposal by the US chief of staff, Mark Milley, to consider a diplomatic solution to the conflict, and Biden declared just three weeks ago that the only ones who are going to decide whether to negotiate with the Russians are the Ukrainians.

Washington, in fact, is preparing to continue sending massive military aid to Ukraine until at least the summer of 2023. By then, the

US hopes that Moscow will have launched a major spring offensive.

, after a winter in which "land and air operations are going to be complicated, due to mud in the first case and bad weather in the second," according to the spokesman for the National Security Council, John Kirby, in a telephone press conference this Wednesday.

The second item of debate is

There, both Biden and Macron will be able to compare notes, since both met with the president of that country, Xi Jinping, at the recent G-20 summit in Bali, just two weeks ago.

Again, as in the Ukraine, the coincidence of general objectives does not occur when going into the details.

, something that the US, thrown into a policy of containment of Beijing reminiscent of that applied during the Cold War with Moscow, is strongly opposed.

But the biggest fight is the one that attracts the fewest headlines.

And it is summed up in one acronym: IRA.

In other words, the Inflation Reduction Act, but in English.

Approved in September after a year of debate in the Senate, it is one of Biden's star initiatives, since he provides 370,000 million dollars (358,600 million euros) for the ecological transition in the US.

Well, what does a law have that aligns, in theory, the US policy against climate change with the European one?

The answer in two words:

In other words, "buy American."

The law provides huge tax incentives and subsidies for the purchase of electric vehicles and clean energy equipment made in the United States.

In other words: the Europeans, who are leaders in these industries,

, if they want it to have a competitive price.

Both measures have angered France and Germany, two countries that are undergoing an energy transition within which the motor sector stands out.

And if there is any industry that carries political weight in Germany, it is car manufacturing.

So the idea that batteries for electric cars have to be made in the US instead of Germany or France has not sat well with Macron and Scholz.

Above all, because French and German companies are taking US promises very seriously: 35% of German companies that manufacture components for electric cars are considering investing in the United States, compared to only 32%, who plan to do so. in their country of origin.

And France is, of course, the one who has had it worse.

That's exactly the kind of insult that doesn't make friends in Washington.

And not in Berlin either.

Although Scholz supports the French position, he does not want a transatlantic trade war over energy transition subsidies.

The reason, foreseeable in the always cautious German chancellor, is, once again, Ukraine.

Even so, it does not seem that one can speak, at least for the moment, of a common Franco-German front against the United States in this field.

After joining the French theses, the government of Olaf Scholz has turned and left Emmanuel Macron alone.

The reason for this change is precisely the war in Ukraine.

According to Berlin, with Europe engulfed in its worst war since World War II, and more dependent on US military aid than ever in the last three decades,

seeking to escalate transatlantic trade tensions is an act of irresponsibility.

Still, Macron and his team are going to raise their grievances with Biden in Washington.

And they are going to link them to strategic competition with China.

According to Paris, if the United States weakens European technology companies, it is facilitating the expansion of Chinese ones.

It's an argument Biden probably won't buy, in part because Silicon Valley big companies believe they are being treated unfairly by Brussels, which with its investigations of companies like Apple, Meta (Facebook, Instagram and WhatsApp) and Alphabet (Google) for its alleged practices opposed to free competition, is opening the doors of the market of the old continent to companies such as TikTok of the Chinese state company ByteDance.

Silicon Valley's power in Washington, moreover, has risen a lot this month,

On the other hand, the idea, launched by France, of the United States giving European companies a treatment similar to that received by Mexican Canadians, seems to have very limited support in Washington, where it is recalled that both Mexico and Canada have part of the North American free trade agreement, which also includes the United States.

Between the US and the EU, however, there is nothing like it.

So the fight for technological primacy in the 21st century

may become the great fault line of the political romance

between Joe Biden and Emmanuel Macron.

It is very probable that the summit leaves everything for, literally, next Monday.

Because that day a new meeting of the US-EU Technological and Commercial Council established in 2021 is held, with the aim of coordinating transatlantic technology policy to precisely face competition from China.

There the negotiation will continue again.

But, by then, Macron will already be at the Elysée and his triumphant visit to Washington will be just a memory marked by affection and a lack of concrete results.