New clash between Vox and the presidency of the Congress of Deputies. This Tuesday, the first vice president of the Bureau, Alfonso Rodríguez Gómez de Celis, withdrew the... 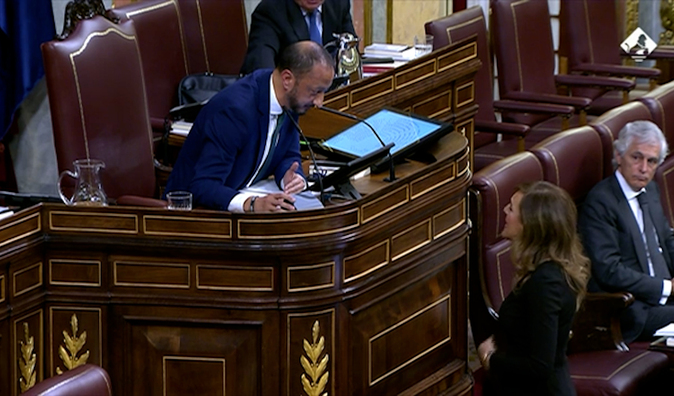 New clash between Vox and the presidency of the

This Tuesday, the first vice president of the Table,

, has withdrawn the word from the Vox deputy for

, for using the term "filoetarra".

A clash that has caused the parliamentary group to leave the plenary session for having "censured again" the presidency of the party led by Santiago Abascal.

Specifically, the Vox deputy had stated from the speaker's rostrum that "this government ignores Malaga and the regions that are loyal to

"I ask you to withdraw that adjective," Gómez de Celis has asked the parliamentarian, to whom she has also warned that she would call to order if she did not proceed to correct her intervention.

Faced with Rueda's refusal, the first vice president has called the deputy to order three times, which is why he withdrew her floor.

From the seats of Vox, the attitude of Gómez de Celis has been reproached and, while Rueda was applauded, she has addressed the vice president outside the microphone, to whom she has conveyed that his decision "has not been fair."

For just over a minute they have had a heated discussion before Rueda came down from the stands.

Finally, the entire group as a block has left the Hemicycle and has moved to an adjoining room, where it has wrapped Rueda in while he finished his parliamentary speech.

What happened this Tuesday in the Lower House during the first plenary session of this week delves into the existing tension between Vox and the presidency of the Chamber.

Less than a week ago, the Vox deputy Carla Toscano personally attacked the Minister of Equality, Irene Montero, by assuring that her only merit is having "studied Pablo Iglesias in depth."

Some statements that generated rejection by all the parties in Congress, but that the minister asked to keep in the Sessions Journal as proof of the existing "political violence" on the part of Vox (a party that she called a "band of fascists" ) against her.

On this occasion, Vox has lamented that, minutes before Rueda was withdrawn, it was endorsed that the terms "ultra right" or "extreme right" are used in the Chamber to refer to the formation.

Vox sources also assure that Gómez de Celis has made a mistake when applying the regulation: He had asked Patricia Rueda if she wanted to remove the term 'filoetarra' from the session journal (article 70.3), something that -regardless of whether she wants to or not withdraw the term- does not prevent continuing with the discourse.

However, Gómez de Celis has applied 104 ('The Deputy or speaker who has been called to order three times in the same session, warned the second time of the consequences of a third call, will be withdrawn, where appropriate, the word and the President, without debate, may impose the sanction of not attending the rest of the session') and has withdrawn the word from the Vox deputy in a sudden way ", they lament from the formation of Santiago Abascal.