[NHK] Russia's military invasion of Ukraine continues. Fighting continues between Russian and Ukrainian forces in various parts of Ukraine, and a large number of... 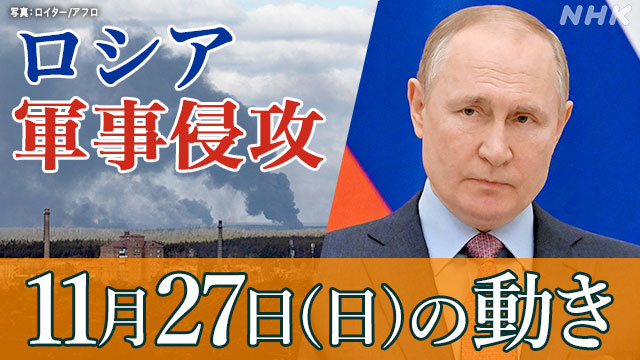 Fighting between Russian and Ukrainian forces continues across Ukraine, forcing thousands of civilians to flee the country.

We will keep you updated on the developments regarding the situation in Ukraine on the 27th (Japan time), such as the situation of the fighting and the diplomacy of the countries concerned.

Belarus's presidential office, which is allied with Russia, announced on the 26th that Foreign Minister Mackay had died.

The local state news agency said he died suddenly, but did not give a detailed cause of death.

In February this year, immediately after Russia's invasion of Ukraine, delegations from both countries were welcomed to Belarus for negotiations. Good," and said that the two countries should quickly come to the negotiating table.

According to Russian state news agency, Mr McCay was scheduled to meet with Russian Foreign Minister Lavrov on the 28th.

The Russian embassy in Belarus posted on SNS, ``I am deeply shocked.

Prime Ministers such as Belgium and Poland visited Kyiv, the capital of Ukraine, on the 26th and promised continued support, while the power supply was severely affected by the attack on infrastructure facilities by the Russian military.

Among them, Belgian Prime Minister Declaw met with President Zelensky in Kyiv on the 26th and said at a joint press conference, "Now is an important time to show our support to the people of Ukraine who are in the most difficult situation. This war. I will do whatever it takes to get through this."

The AFP news agency reports that Belgium has pledged additional financial support of 37.4 million euros, or about 5.4 billion yen.

Ukrainian media reportedly said the talks discussed the supply of goods, such as generators, that Ukrainians need to survive the winter.