Climate issues and their seriousness, despite official international efforts, still do not receive the response they deserve, which prompted environmental and climate activists to express their rejection of international policies in various ways. 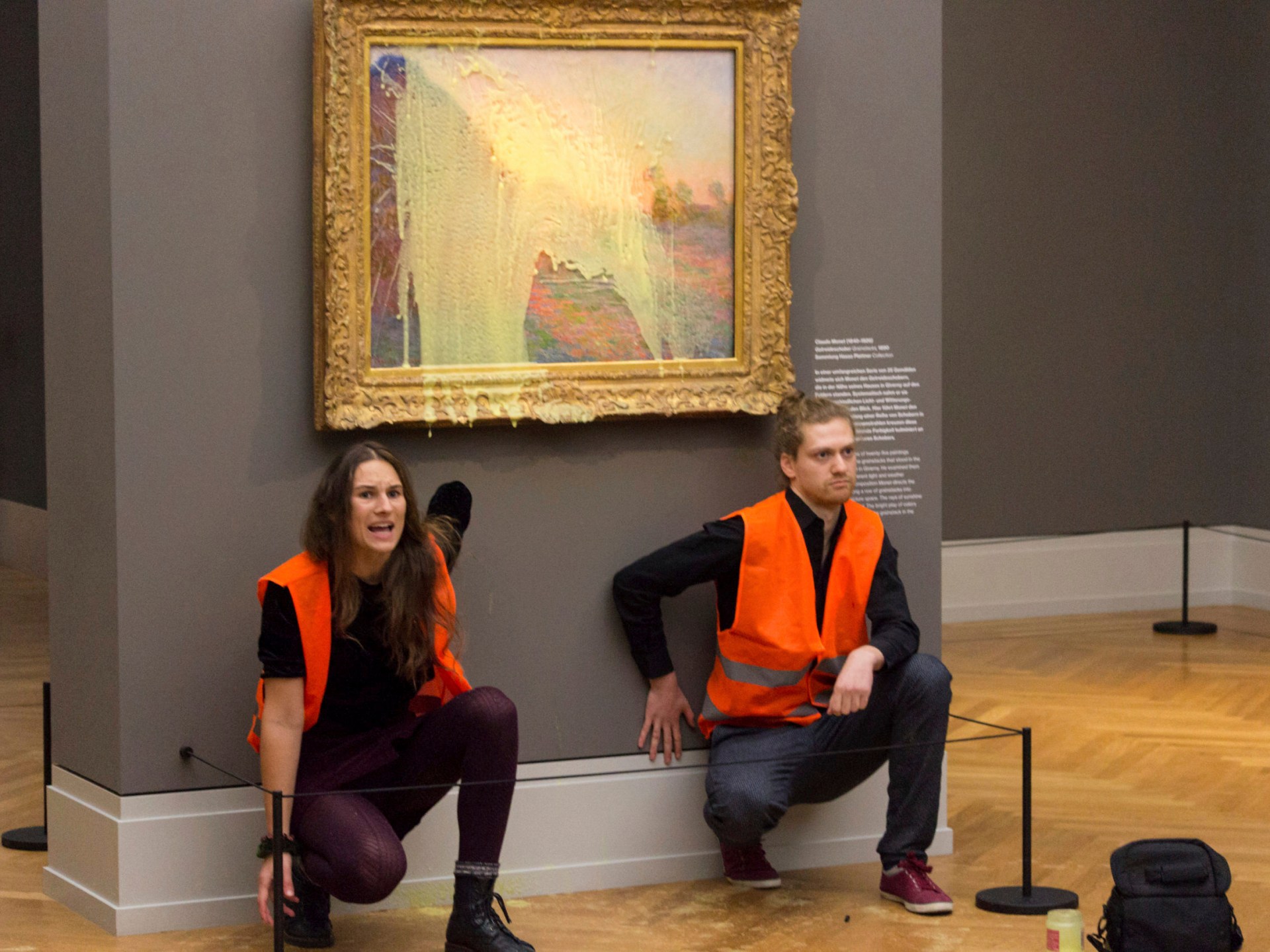 At a time when climate change has reached a degree of danger threatening the extinction of the human race itself, and after former British Prime Minister Boris Johnson spoke last year that the Egyptian city of Alexandria is one of the cities threatened with drowning in a few years, climate issues and their seriousness still do not receive the response they deserve. , despite the official international efforts.

This prompted environmental and climate activists to express their rejection of international policies in various ways.

In an incident that is not the first of its kind, two activists, Hermann and Benjamin, threw a quantity of mashed potatoes on the painting "Grain stacks" by the international painter Claude Monet.

This comes after others threw sauce at the "Sun Flowers" by impressionist painter Vincent van Gogh in an earlier incident.

The two activists who did this belong to the German “Letzte Generation” movement, which was founded in August 2021, where 7 young people set up a camp in the government district in Berlin, and then went on an indefinite hunger strike on August 30, 2021 named.

Their demand before Germany's federal elections was for a public discussion of the climate emergency with all three candidates for chancellor Annallina Birbock, Robert Habeck and Olaf Scholz, and for immediate decisions in the face of the climate catastrophe.

Activists justify their act by saying that the great appreciation for paintings of nature in particular, which is described as universal and whose price is sometimes tens of millions of dollars, no matter how beautiful and splendid they may be, can be no more valuable or more valuable than the real nature, which really deserves the intense care that these paintings receive.

And if the millions of dollars spent on these paintings had been devoted to the environment and its care, things would have been less bad.

Activists believe that Germany itself, along with major industrialized countries such as China and the United States, which caused global warming, have all played a vital role in this catastrophe, which has become an imminent threat to the entire human race, if not all living beings.

Activists are also calling for ways to protect the poor, who will pay the bill for climate change the most, even though they have been far less harmful to the environment. Per capita greenhouse gas emissions in the United States, for example, are 16 times greater than in India, and 60 times greater than in the United States. Bangladesh, and two hundred times larger than it is in Chad, Ethiopia and Mali.

However, the world's wealthy who control big industries are unlikely to relinquish part of the huge profits they reap by disrupting their factories even for short periods of time to cool the planet.

The poor, on the other hand, suffer the most and are most vulnerable to extreme rains, floods, droughts, and even wildfires, because with a lack of money they will be less able to adapt to the needs of the new climate (such as shelter, clothing, or displacement to a place of safety).

It is reported that Hurricane Katrina, which was one of the deadliest hurricanes to hit the United States, was the deadliest among the poor, squatters, huts and low-lying areas who did not even have a car to escape to a safe area.

As for the very affluent class of factory owners, although they are the primary cause of climate change, they will be the most capable of facing extreme weather because they have easy access to safe shelter in the event of torrential rains and floods, or to air-conditioned rooms in cases of extreme warming.

Therefore, activists consider that neoliberal policies are the cause of many climatic disasters besetting the human race, and that the countries sponsoring these policies, in addition to those with influence and capital, do not care about anything but the interest of the wealthy, no matter how damaged nature, the environment and human beings themselves as a result of this policy.

Of course, the German authorities, who arrested the activists, know who really caused this crisis.

And know the only way to reduce the temperature of the planet.

You also know who will pay the bill for those changes.