His Highness Sheikh Ahmed bin Mohammed bin Rashid Al Maktoum, Chairman of the Dubai Media Council, has approved decisions to appoint Emirati media leaders, within the various main sectors of Dubai Media Incorporated, within the framework of a comprehensive development plan aimed at pumping new blood that contributes to achieving strategic goals for the institution during 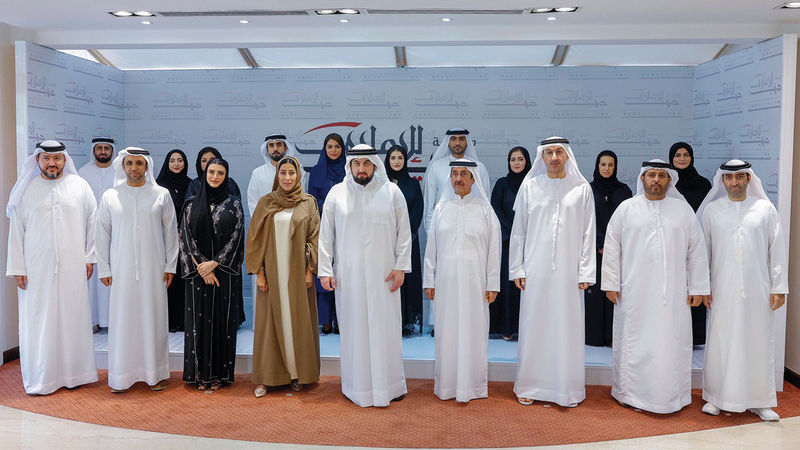 Heralding a new start for the institution

His Highness Sheikh Ahmed bin Mohammed bin Rashid Al Maktoum, Chairman of the Dubai Media Council, has approved decisions to appoint Emirati media leaders, within the various main sectors of the Dubai Media Corporation, within the framework of a comprehensive development plan aimed at pumping new blood that contributes to achieving strategic goals for the Corporation during the next phase. And in line with Dubai’s ambitions, in accordance with the directives of His Highness Sheikh Mohammed bin Rashid Al Maktoum, Vice President and Prime Minister of the UAE and Ruler of Dubai, to allow national cadres to occupy leadership positions and lead the development process, in various sectors.

His Highness Sheikh Ahmed bin Mohammed bin Rashid Al Maktoum expressed his sincere wishes for success to the Emirati leaders who were assigned the responsibility of developing the institution as soon as they received their new duties. its current capabilities, and consider how to provide it with the elements of strength that enable it to achieve the desired results within the shortest time frames, with the highest levels of efficiency and according to the highest standards.

His Highness, Chairman of the Dubai Media Council, said: "His Highness Sheikh Mohammed bin Rashid Al Maktoum pays great attention to giving national capabilities and competencies the full opportunity to lead the development process in all sectors... Based on this vision, we welcome the joining of Emirati leaders who have proven clear competence in the media field, and enjoy With distinguished expertise, we will use it to make a qualitative leap in the institution’s march, to provide a strong and competitive national media that keeps pace with Dubai’s aspirations for the future, and conveys the story of the UAE’s progress and prosperity to the world.”

His Highness Sheikh Hasher bin Maktoum bin Juma Al Maktoum, Chairman of the Dubai Media Incorporated, stressed that “the development axes focus in their entirety on ensuring that the Foundation keeps pace with the media development taking place in the world, and upgrading its content to the status achieved by Dubai with qualitative achievements in various fields, and contributes Its consolidation, which doubles the institution’s responsibility in providing content that keeps pace with the great progress witnessed by Dubai, contributes to consolidating its foundations, and increases the definition of its achievements at the regional and global levels.”

For her part, the Vice President and Managing Director of the Dubai Media Council, Mona Ghanem Al-Marri, said that "the Council will continue to work closely with Dubai Media Corporation, to start implementing the development plan according to clear and specific standard performance indicators, and within the set time frames and objectives that have been approved for the Corporation for the phase." And based on the evaluation processes that included its various media sectors, and monitoring the tracks that will be developed to enhance Dubai’s role as an incubator for Arab and international media content.”

He pointed out that the development plan is based on several axes, the most important of which is working according to economic rules and foundations, while striving to increase the contribution of the media economy to the entire economic system of the Emirate, raising the competitiveness of the various sectors of the institution, and confirming the attractiveness of the content it provides that is commensurate with the aspirations of the recipient.

The CEO of Dubai Media Incorporated said that "Dubai has shown qualitative superiority in the field of transition to the digital environment, keeping pace with the accelerating global trend towards this future environment," noting that the strategic plan to develop the work system in "Dubai Media" focuses, in part, on keeping pace with Dubai’s position, enhancing the institution’s presence and competitiveness in the digital environment, and finding solutions and alternatives that ensure it earns a distinguished position in the digital world, in line with the great ambitions of the development plan towards consolidating the foundations of Dubai’s media leadership.

■ "We are working under the directives of Mohammed bin Rashid, to confirm the role of national cadres in leading the development process... Our goal is to provide a strong and competitive national media."

■ «I directed the start of implementing the 100-day plan with clear performance indicators to bring about a qualitative shift in the institution.. We seek to present a message that keeps pace with Dubai's aspirations».

"We will work to present a media message that lives up to Dubai's position and contributes to its consolidation."

“The board will work with the Foundation to implement the development plan and evaluate performance according to specific indicators, within its various sectors.”

"Raising the institution's competitiveness and increasing the media economy's contribution to the emirate's economic system...main objectives for development."