Since the August 2020 coup in Mali, Chad, Guinea and Burkina Faso have also been the scene of military putsches. Where are the transition processes undertaken in these countries to… 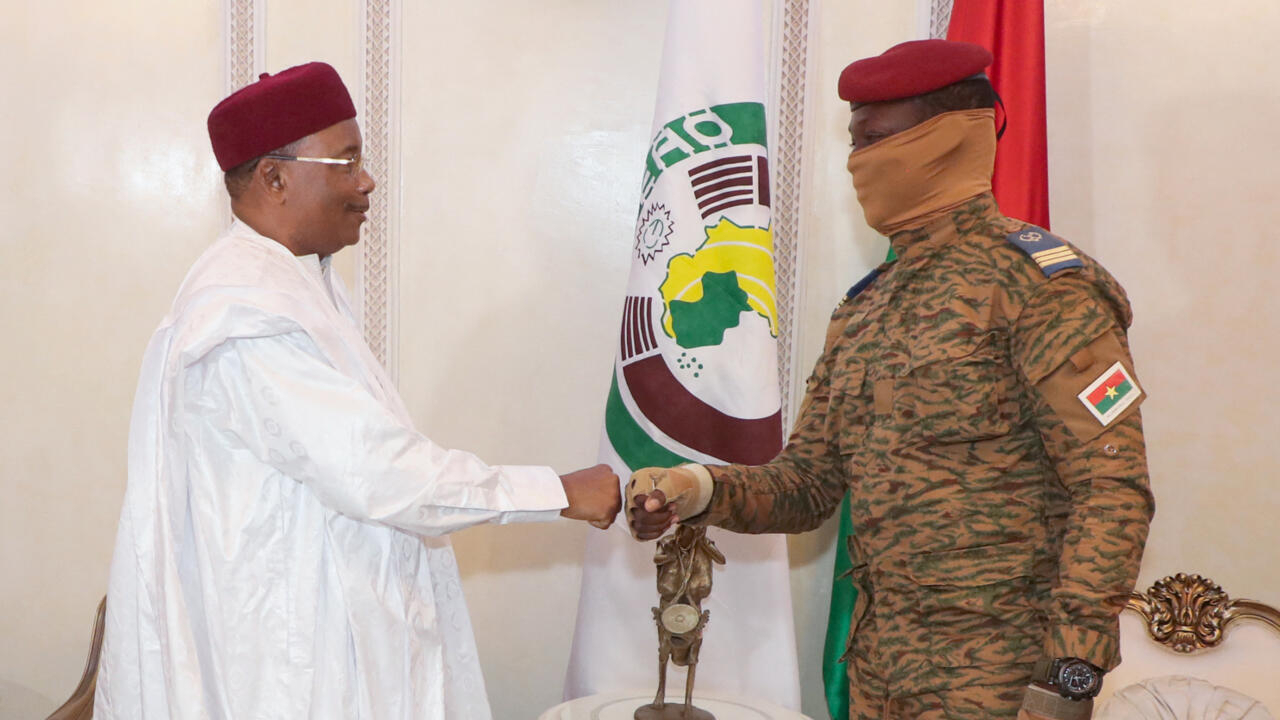 The new strongman of Burkina Faso, Captain Ibrahim Traoré met on Tuesday, October 4 with a delegation from the Economic Community of West African States (ECOWAS) who came to assess the situation, following the coup Statement as of September 30.

This short visit took place at the airport as protesters had gathered to express their hostility against the West African organization, as well as against France.

The new military coup in Burkina Faso is the latest in a series of putschs which have consecrated the seizure of power by the armed forces over the past two years, in Mali, Guinea and even Chad.

In these four countries, transition processes have been initiated in collaboration with regional institutions, not without difficulty.

Eight months after the military putsch of January 24 against President Roch Marc Christian Kaboré and the accession to power of Lieutenant-Colonel Paul-Henri Sandaogo Damiba, the country experienced a second military coup on Friday September 30, led by the young captain Ibrahim Traoré.

Crossed by a deep security crisis, Burkina Faso has lost control of nearly 40% of its territory to the benefit of jihadist groups.

Deemed insufficiently effective on this issue, Paul-Henri Sandaogo Damiba was increasingly challenged within the army itself, which eventually ousted him from power.

>> To read also: Coup d'état in Burkina Faso, the reasons for the fall of the putschist Paul-Henri Damiba

Ibrahim Traoré, the new leader of the junta, has pledged to respect the commitments made by his predecessor to ECOWAS, providing for the organization of elections and a return of civilians to power no later than July 2024. "I am totally satisfied with the interview I had with the captain. We are leaving confident," said former Nigerien President Mahamadou Issoufou, ECOWAS mediator for Burkina, on Tuesday at the end of the meeting.

The West African organization, whose role is to promote cooperation between states as well as guarantee regional stability, has excluded the country from all its bodies since the January coup.

But it has not yet imposed any economic sanctions against Burkina.

On September 5, 2021, an elite unit of the Guinean army overthrew President Alpha Condé, after eleven years in power.

Highly criticized since his contested re-election to a third term, the ousted president was ousted by the Special Forces Group (GFS), an anti-terrorist brigade that he himself had created in 2018. Its leader, Colonel Mamady Doumbouya moved in power and promises to put in place an inclusive transition process "in close cooperation with ECOWAS".

The sub-regional organization then engages in discussions with the junta without reaching an agreement on the duration of the transition.

In mid-May, the National Transitional Council (CNT), which has served as Parliament since the coup, validates a 36-month transition period, despite criticism from the opposition.

A calendar also rejected by ECOWAS, which expects a maximum duration of two years.

Meeting in New York on September 22, on the sidelines of the UN General Assembly, the members of the sub-regional organization announced a regime of "gradual sanctions" against the country, including targeted sanctions against members and supporters of the government, as well as the suspension of all financial assistance from ECOWAS.

>> Read also: New sanctions against Guinea heighten tensions between the junta and ECOWAS

On April 20, 2021, state television announced the death of Chadian President Idriss Déby Itno, killed on the battlefield against the rebels.

While the Constitution provides for the President of the National Assembly to act in the interim, a military council takes power, headed by the son of the late President Mahamat Idriss Déby Itno, who promises to organize "free and transparent elections ".

A transition then dubbed by France and the African Union provided that it does not exceed 18 months.

On October 1, 2022, at the end of the "Inclusive and Sovereign National Dialogue" (DNIS), conducted in the absence of two of the most important rebel groups and the main opposition platform, Chad announced the extension of the transition period for a maximum period of two years and confirms the possibility for Mahamat Idriss Déby to stand for election.

>> To read also: National dialogue in Chad, debates that last and an election that is moving away

The African Union, for its part, insists on respecting the initial 18-month timetable and "unequivocally recalls that no member of the Transitional Military Council (TMC) can be a candidate in the elections at the end of the transition".

If no sanction has yet been decreed against Chad, the African Union has warned that a "special session" could be convened "to specifically examine the political transition" in the country.

As a reminder, Chad is not part of ECOWAS and therefore cannot be sanctioned by the West African organization.

On August 18, 2020, in a context of growing demonstrations against the power in place, President Ibrahim Boubacar Keïta was overthrown during a military putsch.

>> To read also: Coup d'état in Mali, the democratic solution promised by the army raises concerns

These measures were finally lifted in October of the same year after the establishment by the junta of a transitional civilian government.

The authorities then undertake to organize elections before the deadline of February 27, 2022.

But in May 2021, the junta ousted the transitional government it had put in place during a second putsch.

Deeming the schedule untenable, the new government announced the organization of National Assizes.

In December 2021, these consultations recommend extending the transition for up to five additional years.

A "totally unacceptable" decision for ECOWAS, which imposed a new economic embargo in early January.

On June 6, the president of the transition Assimi Goïta finally decrees a transition schedule lasting 24 months from March 26, 2022. A constitutional referendum is scheduled for March 2023, followed by legislative elections between October and November 2023, then the presidential election in February 2024.

Added to this is the adoption, on June 17, of a new electoral law and the establishment of a commission responsible for drafting the new Constitution.

Following these announcements, described as "progress" by the West African organization, ECOWAS announced on July 3 the lifting of economic sanctions against Mali, with the exception of the targeted sanctions imposed against its leaders.

Like Burkina and Guinea, Mali remains excluded from the governing bodies of the sub-regional organization.