“Become our citizens”: Putin signed a package of documents ratifying the entry of four regions into the Russian Federation

Vladimir Putin signed a number of laws ratifying the accession to Russia of the Donetsk and Lugansk People's Republics, as well as the Zaporozhye and Kherson regions. In accordance with this decision, the number of subjects in the Russian Federation increased to 89. Along with this, the head of state signed decrees on the appointment of interim heads of new regions. They were the current heads of the people's republics and regions, who signed agreements on joining Russia on September 30 in the Kremlin. 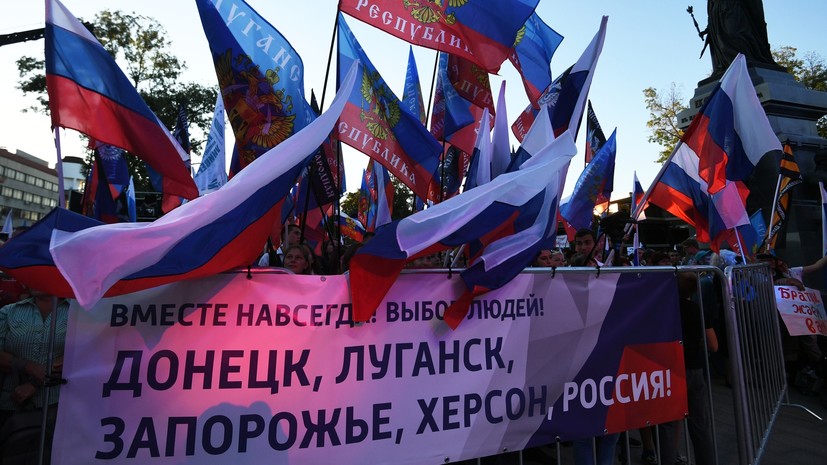 On Wednesday, October 5, Russian President Vladimir Putin signed four federal constitutional laws on the accession to the Russian Federation of the Donetsk and Lugansk People's Republics, as well as the Zaporozhye and Kherson regions.

Along with this, the head of state signed the relevant laws on ratification.

Taking into account these decisions, there are now 89 subjects in the Russian Federation.

In addition, the President signed decrees on the appointment of interim heads of new regions.

The transitional period for integration with the Russian Federation of new entities will be valid from the date of adoption until January 1, 2026.

In addition, by June 1, 2023, territorial subdivisions of federal executive bodies will be created in the new republics and regions.

Along with this, during the transitional period, prosecutorial bodies will be established and the functioning of the judicial system of the Russian Federation will be ensured.

The formation of urban and municipal districts in the regions, as well as the determination of the boundaries of municipalities, is expected to be completed in six months.

The ruble will become the monetary unit in the territories of the new regions.

At the same time, until December 31, 2022, the circulation of the Ukrainian hryvnia will be allowed for settlements in cash and non-cash forms.

Approval in the Federation Council

A day earlier, on October 4, the Federation Council approved draft constitutional laws on the admission of the DPR, LPR, Kherson and Zaporozhye regions into the Russian Federation, and also ratified the relevant international treaties.

As Valentina Matviyenko, speaker of the Federation Council, said earlier, all aspects of the conclusion of contracts have passed the necessary examinations, having received a complete and exhaustive legal justification.

According to her, the entry of new regions into the Russian Federation is "an event of great political and spiritual significance."

“People, having made their choice in the referendums, clearly indicated that they want a calm and peaceful future for themselves, for their children.

We are bound by a common destiny, culture, language, and faith.

We are one people.

And today we made a fateful and long-awaited decision,” she said during the meeting.

In turn, Grigory Karasin, Chairman of the Federation Council Committee on International Affairs, who delivered a single report, stressed that the historic decision of the inhabitants of these four regions was preceded by eight years of severe trials.

This is the only way we will save people from genocide and violence,” he added.

The day before, both packages of documents overcame the vote in the State Duma, and the lower house of parliament also appointed coordinating deputies in the DPR, LPR, Zaporozhye and Kherson regions.

Also on russian.rt.com “Unanimously”: the State Duma ratified the laws on the admission of the DPR, LPR, Zaporozhye and Kherson regions into Russia

From 23 to 27 September, referendums were held in the Donetsk and Lugansk People's Republics, as well as Zaporozhye and Kherson regions.

In all territories, the vast majority of residents voted for joining Russia.

“I want the Kyiv authorities and their real masters in the West to hear me, so that everyone remembers this: people living in Lugansk and Donetsk, Kherson and Zaporozhye become our citizens forever,” Vladimir Putin said during the signing ceremony.

According to him, the Kyiv authorities should treat the free will of people with respect - and nothing else.

“We call on the Kyiv regime to immediately cease fire, all hostilities, the war that it unleashed back in 2014, and return to the negotiating table.

We are ready for this, it has been said more than once.

But we will not discuss the choice of the people in Donetsk, Luhansk, Zaporizhia and Kherson, it has been made, Russia will not betray it," the president emphasized.

On October 2, the Constitutional Court of Russia recognized the international treaties on the admission of new territories as corresponding to the Constitution of the Russian Federation.

After that, Vladimir Putin submitted to the State Duma draft federal constitutional laws on the entry of the DPR, LPR, Zaporozhye and Kherson regions into the Russian Federation, as well as bills on the ratification of agreements on the admission of new subjects.

“The draft laws introduced by the president fully consolidate the most important social and economic guarantees for persons living in the territories of the constituent entities being formed, and form a system for protecting the rights and freedoms of citizens,” explained Pavel Krasheninnikov, chairman of the committee on state building and legislation.

Those living in these territories will be provided with guarantees in the implementation of labor activities.

Documents on education confirming the civil status, work experience, the right to receive pensions, social and medical assistance, etc., issued in the DPR, LPR, as well as in Ukraine, are also recognized.

At the same time, all peoples living on the territory of the four subjects are guaranteed the right to preserve and study their native language.

At the same time, in the DPR and LPR, Russian is the state language.