"Repelling the attacks of superior forces": the Ministry of Defense of the Russian Federation announced the retention of positions in the Andreevo-Krivoy Rog direction

The Russian military is holding its positions in the Andreevo-Krivoy Rog direction, repelling attacks by superior enemy forces, the Russian Defense Ministry said. According to the department, over the past day, the Armed Forces of Ukraine lost more than 230 people, four tanks and 18 armored vehicles only in the Nikolaev-Krivoy Rog direction. Fire damage was also inflicted on the enemy in Kharkiv, Zaporozhye, Kherson regions and in the uncontrolled territory of the DPR. And in the Nikolaev region, an Iskander missile destroyed a warehouse with Bayraktar TB2 drones. 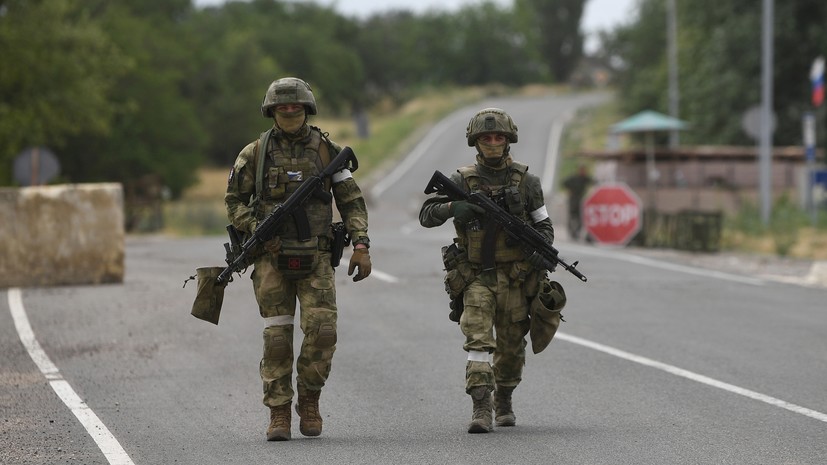 The Russian military is holding its positions in the Andreevo-Krivoy Rog direction, repelling attacks by superior enemy forces, the Russian Defense Ministry said.

According to the official representative of the Defense Ministry, Lieutenant-General Igor Konashenkov, over the past day, during the fighting in the area of ​​​​Nova Kamenka in the Kherson region, up to 30 Ukrainian nationalists were liquidated, two tanks and four infantry fighting vehicles were destroyed.

According to the defense department, in total, the enemy lost more than 230 personnel, four tanks, 18 armored combat vehicles, two Gvozdika self-propelled howitzers, two mortars and 20 vehicles in the Nikolaev-Krivoy Rog direction in a day.

In the course of a special military operation, strikes continue to be made in other directions as well.

In the Kharkiv region, units of the first echelon and reserves of the 92nd mechanized brigade of the Armed Forces of Ukraine were hit - up to 100 military personnel were eliminated, 13 units of military equipment were destroyed.

The losses of the 14th mechanized brigade of the Armed Forces of Ukraine amounted to 15 people killed and up to 40 wounded, as well as seven armored vehicles and five pickup trucks with heavy machine guns.

In the Krasnolimansky direction, massive fire damage was inflicted on the manpower and equipment of the 93rd mechanized brigade of the Armed Forces of Ukraine.

Artillery fire in the areas of the settlements of Yampolovka and Torskoye (DPR) eliminated two Ukrainian sabotage and reconnaissance groups with a total number of more than 20 militants.

According to the Ministry of Defense of the Russian Federation, up to 70 militants were liquidated in the Lisichansk direction, one tank was destroyed, as well as three armored vehicles and six pickup trucks with heavy machine guns.

In addition, as a result of a missile attack on units of the 102nd territorial defense brigade in the Zaporozhye region, up to 30 servicemen were liquidated, seven vehicles were destroyed.

Russian aviation, missile troops and artillery hit ten command posts of the Armed Forces of Ukraine in the Kharkiv, Kherson and Nikolaev regions, as well as in the uncontrolled territory of the DPR in a day.

In addition, the points of temporary deployment of the 57th motorized infantry brigade of the Armed Forces of Ukraine in the Kherson region, as well as units of foreign mercenaries and nationalist formations in Konstantinovka and Kharkov, were hit.

In the Zaporizhia and Mykolaiv regions, as well as in the DPR, six warehouses of ammunition and rocket and artillery weapons were destroyed.

Along with this, in the Nikolaev region, a hangar with Bayraktar TB2 unmanned aerial vehicles was liquidated by a high-precision strike of the Iskander tactical missile on the Voznesensk military airfield.

An AN / TPQ-36 US-made counter-battery radar was also destroyed.

In the area of ​​\u200b\u200bthe settlement of Novovladimirovka, Nikolaev region, Russian Aerospace Forces fighters shot down a Ukrainian MiG-29.

According to the Ministry of Defense of the Russian Federation, Ukraine continues shelling the territory of the Zaporozhye nuclear power plant.

During the day, the artillery of the Armed Forces of Ukraine fired more than 43 shells on the northern outskirts of the city of Energodar and on the territory adjacent to the nuclear power plant.

The strikes were carried out from the Ukrainian-controlled settlement of Marganets, Dnepropetrovsk region.

According to the Ministry of Defense, the enemy artillery was suppressed by a retaliatory strike, the radiation situation at the station remains normal.