New incursions into banks in Lebanon

An angry depositor stormed a bank in eastern Lebanon to demand the transfer of an amount to his son residing in Ukraine, in a new episode of similar incidents in which depositors demand their money in a country suffering from a stifling economic crisis.This incident is one of three raids yesterday, and seven similar incidents followed. 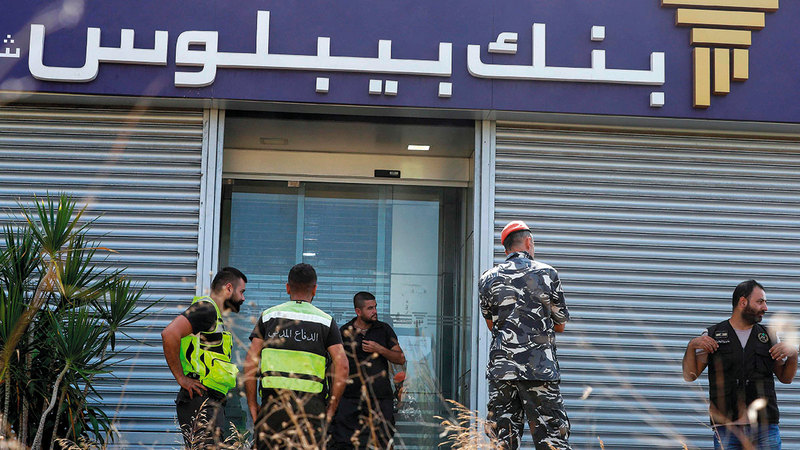 New incursions into banks in Lebanon

A branch of Byblos Bank in Tire was stormed.

An angry depositor stormed a bank in eastern Lebanon to demand the transfer of an amount to his son residing in Ukraine, as part of a new episode of similar incidents in which depositors demand their money in a country suffering from a stifling economic crisis.

This incident is one of three raids yesterday, and follows seven similar incidents last month that prompted banks to close their branches for a week before partially reopening their doors amid strict security measures, using special groups to guard their branches in addition to the security forces.

Most of them receive customers based on prior appointments.

Yesterday morning, the depositor, Ali Deeb Al-Sahili, stormed the branch of the BLC Bank in the city of Chtaura in the Bekaa region (east), and in possession of a weapon, he demanded to obtain his deposit of more than 24 thousand dollars, according to what was announced by the Depositors’ Scream Association, a civil initiative concerned with rights Depositors and keep pace with their movements.

Hassan Mughniyeh of the association said that Al-Sahli, a retired ISF member in his fifties, "has previously gone to the bank several times to transfer a sum of money amounting to $4,430 as housing and education allowance for his son, who is continuing his studies in Ukraine."

He added, "The bank refused to give him the amount, so he stormed the bank and took hostages inside."

Later, the security forces arrested Al-Sahli after a person in the bank managed to withdraw the weapon from it.

And local media quoted Al-Sahli as saying that his son was expelled from his home for not paying the rent, forcing him to put his kidneys up for sale to secure the required amount.

He confirmed his refusal to leave the bank before receiving his entire deposit.

Parents of students abroad organize periodic demonstrations to demand that they be allowed to transfer funds to their children.

In the city of Tire (south), the depositor, Ali Hassan, stormed a branch of Byblos Bank, according to the Depositors’ Scream Association.

Hassan surrendered to the security forces after the bank handed him his deposit in Lebanese pounds, according to the exchange rate approved by the banks.

In Tripoli (north), a number of employees of the Qadisha Electricity Company stormed the FNB Bank, in protest of not receiving their salaries, according to the official National News Agency.

In the Hazmieh area near Beirut, a depositor sits in a peaceful manner inside a bank, demanding that the ceiling of withdrawals available to him be raised on a monthly basis.