Yemen .. "Presidential" renews its adherence to the armistice and dealing with peace efforts

Head of the Yemeni Presidential Leadership Council Rashad Muhammad Al-Alimi affirmed the council and government's support for the efforts of the UN envoy to Yemen, calling for the importance of doubling international pressure to push the Houthi militias to deal seriously with them, and to give priority to the interests of the Yemeni people over the interests of their leaders. 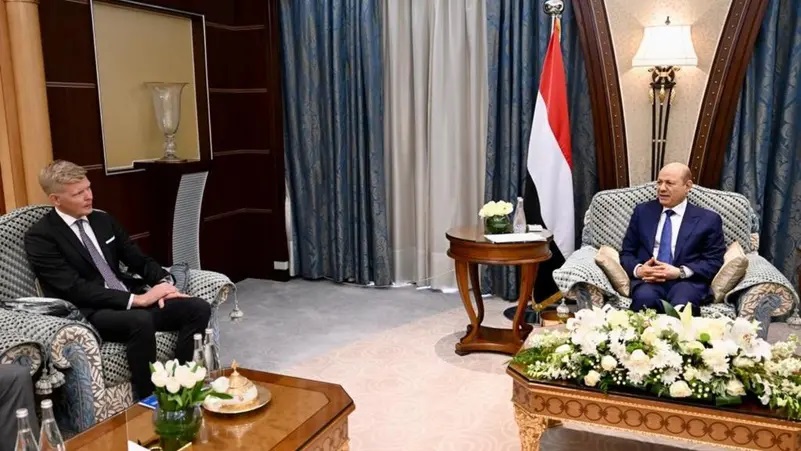 Yemen .. "Presidential" renews its adherence to the armistice and dealing with peace efforts

Head of the Yemeni Presidential Leadership Council Rashad Muhammad Al-Alimi affirmed the council and government's support for the efforts of the UN envoy to Yemen, calling for the importance of doubling international pressure to push the Houthi militias to deal seriously with them, and to give priority to the interests of the Yemeni people over the interests of their leaders.

According to the official Saba news agency, Al-Alimi reiterated, during his meeting today in the Saudi capital, Riyadh, the United Nations Special Envoy Hans Grundberg, and his assistant Moeen Shreim, the commitment of the Council and the Yemeni government to the approach of a just and sustainable peace on the basis of agreed references nationally, regionally, and internationally, especially Resolution 2216. .

While Al-Alimi praised the role of the UN envoy and his team in order to bring peace and stability, he explained that the indication of the position of the Houthi militias hostile to peace efforts and good efforts to stop the bloodshed, in return for the initiatives facilitated by the legitimate government to alleviate human suffering in all parts of the country, including our people who are under the force’s control. These militias.

The Yemeni political and military circles, and the international community, are awaiting what will happen in the remaining hours of the current truce, as it is expected to witness a breakthrough in the Houthi position on extending the truce, as the second option is considered catastrophic at the level of Yemen and the region.

The Yemeni government had announced its acceptance of the study of the updated proposal of the UN envoy to Yemen regarding the extension and expansion of the truce, and the positive interaction with it, while the Houthi militia, through the head of its negotiating delegation, Muhammad Abd al-Salam, announced its refusal to deal with the UN proposal.

The government confirmed that it is "working to study the updated proposal and will deal with it positively, based on its keenness and exerting all efforts aimed at alleviating the human suffering of all our people in all governorates without any discrimination."

Yemeni diplomatic sources revealed the most important thing in the updated UN proposal, noting that it included “addressing revenue sources, setting a time period for disbursing salaries within a month, and expanding the scope of payment for all public sector employees and retirees,” as well as “facilitating the delivery of support and the operation of the Marib and Freedom station.” movement of citizens and goods.

According to the sources, the Houthi militias have no choice but to agree to extend the armistice and work to make international efforts to achieve peace in Yemen a success, and as for facing the military option, the militias have failed to trade humanitarian issues for the benefit of their members and have become exposed to the world as the only obstacle to peace in Yemen. .

Over the past months, the militias have evaded abiding by the terms of the armistice, and continued to commit violations throughout the fighting fronts, and continued their mobilization and recruitment operations, taking advantage of the cessation of air strikes by the Arab coalition to support legitimacy in Yemen.

A few hours before the end of the current truce, the fighting fronts witnessed a remarkable Houthi escalation, as the militias sent more combat reinforcements and armed elements to the fronts of Marib, Taiz, Al-Jawf and the western coast.

The militias also launched sporadic attacks at dawn today on army and resistance positions on the fronts northwest of Ma'rib, the most violent of which were on the Mahzam Mas front on the outskirts of the capital, Sana'a, with Ma'rib.

Field sources stated that the militias raised the state of combat readiness in the seam areas on the fronts of Marib, Taiz and Al-Bayda, and deployed missiles and marches in separate areas, and announced their readiness to target the oil areas in the interior of Yemen.

In Taiz, the governorate's military axis announced that it had monitored the killing and wounding of 188 soldiers and 67 civilians, in more than 5,000 violations committed by the Houthi militia since the start of the truce.

In Amran, north of Sanaa, the Houthi militia kidnapped five of the notables and sheikhs of the Ayyal Sareeh district, against the background of their rejection of a Houthi preacher that the militias tried to impose by force on a preacher in the village of Sarbat last Friday. .