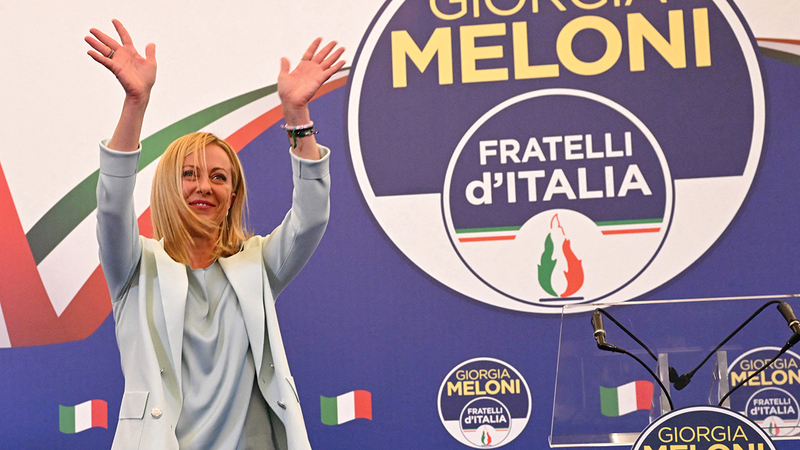 “Italy Brothers” garners 26% of the votes

The populist Georgia Meloni "Fratelli d'Italia" (Brothers of Italy) party won 26% of the vote in the elections, according to partial results, which opens the door for a woman who in the past expressed her admiration for Mussolini to be the first female prime minister in the country's history.

Her success represents a huge change in Italy, a founding member of the European Union and the third largest economy in the eurozone, just weeks after the far-right's election victory in Sweden.

Meloni, who campaigned under the slogan "God, Homeland, Family," is expected to become Italy's first female prime minister, although the process of forming a new government may take weeks.

With soaring inflation, a looming energy crisis and war in Ukraine, the 45-year-old sought to reassure those concerned about her lack of experience and her radical past.

Georgia Meloni said voters sent a "clear message" to support her party in leading the right-wing coalition to power.

"If we are called to rule this nation, we will do it for all Italians," she told reporters.

We will do this with the aim of uniting people and promoting what unites them, not what divides them.”

Her two allies in the coalition, the far-right League, led by Matteo Salvini, and Forza Italia, led by former Prime Minister Silvio Berlusconi, replaced her party, according to partial results.

They are all expected to win about 44% of the vote, enough to secure a majority in both houses of parliament.

The participation rate fell to the lowest historical level to about 64%, which is about nine percentage points lower than the previous elections in 2018.

And Spanish Foreign Minister Jose Manuel Alparis warned that "populist movements always grow, but they always end in the same way - in disaster."

US Secretary of State Anthony Blinken tweeted: "We are keen to work with the Government of Italy on our shared goals: supporting a free and independent Ukraine, respecting human rights, and building a sustainable economic future."

Yesterday, French President Emmanuel Macron affirmed his respect for the "democratic choice" of the Italians, calling on Rome to "continue cooperation" with the Europeans.

"Italy is a very pro-European country, and its citizens are very pro-European, and we assume that will not change," German government spokesman Wolfgang Buechner said during a press conference.

As for the European Commission, its spokesman, Eric Mammer, expressed its hope to establish "constructive cooperation" with the next Italian government.

Kremlin spokesman Dmitry Peskov told reporters when asked about Meloni's victory, "We are ready to receive any political forces capable of transcending the prevailing trend charged with hatred for our country, and expressing a desire to be constructive in relations with our country."

Georgia Meloni has backed away from the idea of ​​Italy leaving the eurozone, but says Rome should emphasize its interests more, adopting policies that defy Brussels on almost everything from public spending rules to massive waves of immigration.

Her coalition also wants to renegotiate the European Union's pandemic recovery fund, and sees the 200 billion euros ($193 billion) that Italy is due to receive must take into account the energy crisis.

But the money is tied to a series of reforms that outgoing Prime Minister Mario Draghi has barely launched, and analysts say she has limited room to maneuver in this regard.

Meloni has topped opinion polls since the prime minister called snap elections in July after the national unity government collapsed.

The Brothers of Italy party has its roots in the post-fascist movement founded by supporters of Benito Mussolini, and Meloni herself hailed the dictator as a young man.

But she sought to distance herself from her past as her party became a major political force.

The party moved from just 4% of the vote in 2018 to leading the results of Sunday's elections.

Meloni strongly supports EU sanctions against Russia, while Salvini has criticized them as ineffective.