Blinken calls on China to maintain stability in the Taiwan Strait

US Secretary of State, Anthony Blinken, urged maintaining stability in the Taiwan Strait, when he met with his Chinese counterpart Wang Yi in New York, while signs of de-escalation appeared on the horizon in the tension between the two countries.The meeting lasted 90 minutes on the sidelines of the United Nations General Assembly. 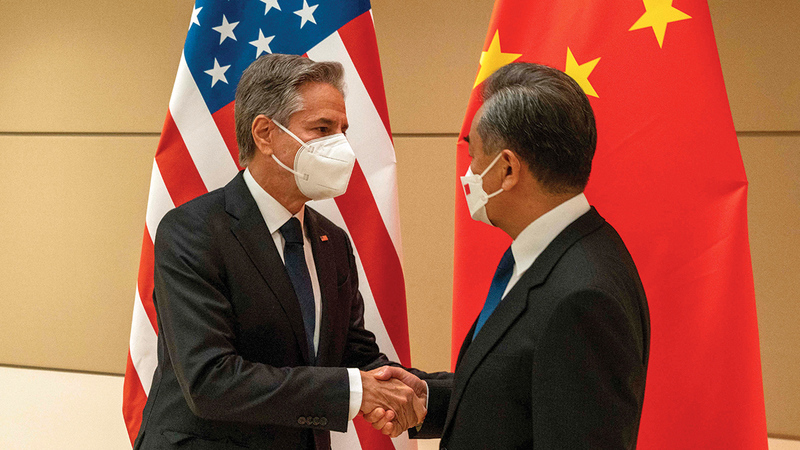 During his meeting with his Chinese counterpart in New York

Blinken calls on China to maintain stability in the Taiwan Strait

A US official described Blinken and Wang Yi's talks as "very frank."

US Secretary of State Anthony Blinken urged maintaining stability in the Taiwan Strait when he met with his Chinese counterpart Wang Yi in New York, while signs of de-escalation in tension between the two countries appeared on the horizon.

The meeting lasted 90 minutes on the sidelines of the United Nations General Assembly, and the two ministers held talks that a US official described as "very frank" and focused largely on Taiwan.

The US State Department said in a statement, following the meeting, that the US Secretary stressed that maintaining peace and stability in the Taiwan Strait is essential to regional and global security and prosperity, and added that he discussed the need to maintain open lines of communication, and to manage relations between the United States and the People's Republic of China with a sense of responsibility. Especially in times of stress.

The ministry described the talks on Taiwan as "direct and frank."

Blinken has kept his meeting with Wang despite the relaxation of his obligations due to his father's death last Thursday.

This was the first meeting between them since talks in July in Bali, during which they expressed their optimism to achieve more stability.

A month later, US House Speaker Nancy Pelosi flew to Taiwan, angering Beijing, which then organized massive military exercises around the island.

For its part, the Chinese Foreign Ministry said in a statement that Wang told Blinken that "the United States is sending wrong and very dangerous signals to encourage Taiwan's independence."

It added that Wang told Blinken that China wanted a "peaceful reunification with Taiwan."

In a sign of calm, the Chinese minister met in New York with US climate envoy John Kerry, although Beijing suspended coordination with Washington in this area, in response to Pelosi's visit to Taiwan.

However, in a speech before meeting Blinken, Wang said that "the Taiwan issue is the most serious subject of tension in US-China relations."

"Just as the United States does not allow Hawaii to be carved out of it, China has the right to demand the country's unification," Wang added.

The Chinese minister condemned the US decision to allow Pelosi to visit Taiwan.