Putin announces partial mobilization of the Russian army... and warns the West against "nuclear blackmail"

Russian President Vladimir Putin ordered the first partial mobilization of the Russian army since World War II, and warned Western countries of what he described as “nuclear blackmail.” The Russian army called up 300,000 reservists, while US President Joe Biden said, “Russia’s goal is to cancel Ukraine’s right to 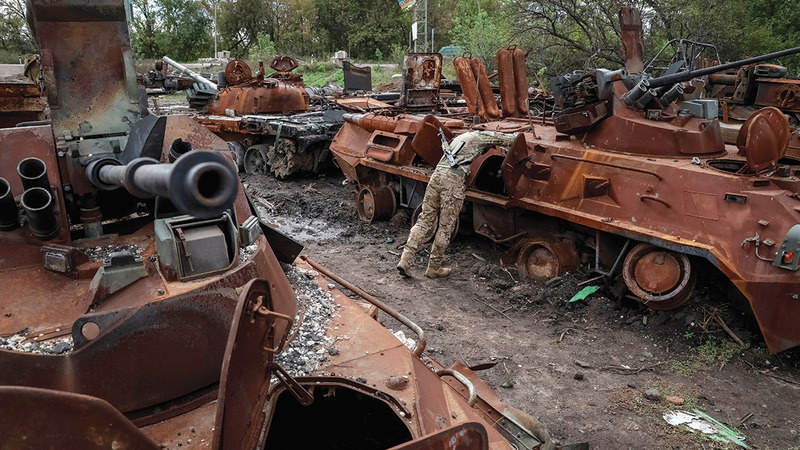 Biden: Russia's goal is to cancel Ukraine's right to exist as a state

Putin announces partial mobilization of the Russian army... and warns the West against "nuclear blackmail"

Russian President Vladimir Putin ordered the first partial mobilization of the Russian army since World War II, and warned Western countries of what he described as “nuclear blackmail.” The Russian army called up 300,000 reservists, while US President Joe Biden said, “Russia’s goal is to cancel Ukraine’s right to existence as a state.

"If our territorial integrity is threatened, we will use all available means to protect Russia and our people," Putin said in a speech broadcast on Russian television, yesterday.

"The West is plotting to destroy Russia, and is practicing nuclear blackmail by discussing the possible use of nuclear weapons against Moscow," he added, accusing the United States, the European Union and Britain of encouraging Ukraine to push military operations to be inside Russia itself.

He continued, "The West has crossed all lines in its aggressive anti-Russian policy, and those who try to blackmail us with nuclear weapons should know that the matter can turn against them."

Putin said that senior government officials in leading NATO countries - he did not name them - had talked about the possible use of nuclear weapons against Russia.

Putin pointed out that Russia has many weapons to respond to Western threats, stressing that he "is not joking."

Putin accused the West of "risking a nuclear catastrophe" by allowing Ukraine to bomb the Russian-controlled Zaporizhia nuclear power plant in Ukraine.

Putin signed a decree on the partial mobilization of Russian reservists, and said that Russian soldiers are already facing the full force of the Western military machine in Ukraine.

For his part, Russian Defense Minister Sergei Shoigu announced that Russia will call up 300,000 reservists to fight in the war against Ukraine, explaining that those who will be subject to partial mobilization are those who have performed military service, have a specialized military record, and combat experience.

He added that Russia is no longer fighting only Ukraine, but is fighting the West as a whole, noting that there are 70 military satellites and 200 satellites for civilian purposes belonging to the West, which are supporting Ukraine.

He explained that 150 military advisers from the North Atlantic Treaty Organization (NATO) participate in the leadership of the Ukrainian army.

On the other hand, US President Joe Biden said, during his speech before the United Nations General Assembly in New York yesterday, that "Russia's goal is to cancel Ukraine's right to exist as a state," pledging the United States to continue its solidarity with Ukraine.

Biden accused Russia of violating the basic principles of the United Nations Charter, and said that "Moscow makes irresponsible threats to use nuclear weapons," adding, "No side can win a nuclear war and it should never be fought." No one but Russia sought conflict.”

For his part, NATO Secretary-General Jens Stoltenberg said that Putin miscalculated about Ukraine and made a grave mistake, adding that Russian forces lack equipment, appropriate command and control, and stressed that sending more troops will escalate the conflict in Ukraine, and that the alliance And allies are in close dialogue with the defense industry to increase production of weapons and ammunition.

"There is still no change in Russia's nuclear readiness, and nuclear war should never be fought," he added.

The European Commission, the European Union's executive arm, said Putin's latest decision on the war in Ukraine showed his "desperation and that he is resorting to a reckless nuclear gamble to escalate tensions further".

"This is just another indication that Putin is not interested in peace, that he is interested in an escalation of war," said European Commission foreign policy spokesman Peter Stano.

"The United States takes Putin's threat to use nuclear weapons in the war in Ukraine very seriously, and he should expect dire consequences if he does," a White House spokesman said.

"This is irresponsible rhetoric from a nuclear power," said US National Security Council spokesman John Kirby.

British Defense Secretary Ben Wallace said that Russia's announcement of mobilizing forces for the war in Ukraine was an admission by its President, Vladimir Putin, that the war had failed.

On the other hand, Putin announced his explicit support for referendums in vast areas of Ukraine controlled by Russian forces, while the first step would be to formally annex those areas to his country.

Officials of the unilaterally declared republics of Donetsk and Luhansk, which were recognized by Russia, and officials appointed by Russia in the Kherson and Zaporizhia regions asked for a vote on the future of those regions. .

Ukrainian President Volodymyr Zelensky played down the importance of the referendums, calling for continued pressure on Russia.

The United States had condemned the referendum operations that Russia intends to conduct to annex Ukrainian regions, stressing that it will never recognize the results of these referendums.

"The United States will never recognize Russia's claims to any parts of Ukraine it says it has annexed," White House National Security Adviser Jake Sullivan said, while US Secretary of State Anthony Blinken called those referendums "illegal."

"We take Putin's threat to use nuclear weapons very seriously."