Depositors stormed five Lebanese banks to demand the return of their frozen savings in the banking system, yesterday, in a wave of raids this week driven by frustration, due to the freezing of savings and the worsening financial collapse with no end in sight. 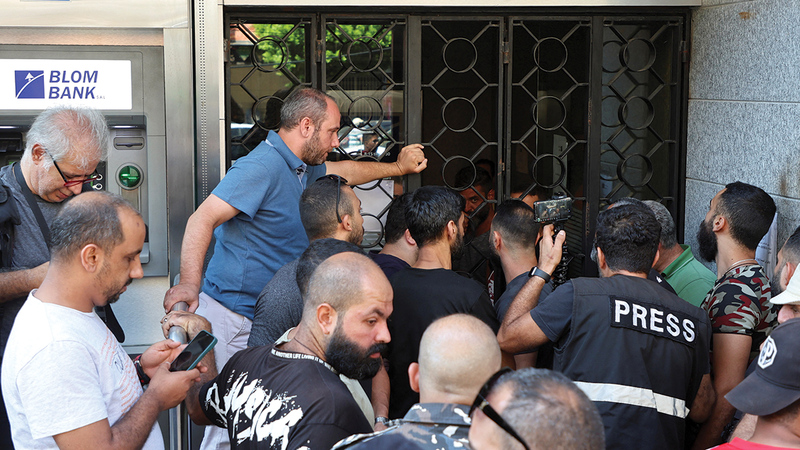 People standing outside a Blom Bank branch in Beirut.

Depositors stormed five Lebanese banks to demand the return of their frozen savings in the banking system, yesterday, in a wave of raids this week driven by frustration, due to the freezing of savings and the worsening financial collapse with no end in sight.

A total of seven banks have been stormed since Wednesday in Lebanon, where commercial banks have withheld most of the depositors' money since an economic crisis erupted three years ago, leaving many residents unable to pay for the basics of life.

Yesterday morning, a man identified as Abd al-Rahman Sobra, BLOM Bank (Blom) entered the Tariq al-Jadida area in Beirut to demand his savings, the bank said in a statement sent to "Reuters".

He barricaded himself inside the bank branch hours later, telling Reuters by phone that he had handed his gun to the security forces and only wanted his money.

He told Reuters: "I entered the bank to take my Egyptians and Mutasim inside the bank, sitting three, four, five days or a month."

He added that he had rejected an offer from the bank to obtain part of his savings, which amounted to 300,000 dollars in the collapsing Lebanese currency.

He continued, "I am sitting and I will never move until I get my deposit back."

Cheers in support of Sobra erupted from a large crowd outside the bank, including Bassam Sheikh Hussein, who carried out the first storming of a bank in Lebanon in August to get his savings from his bank, which dropped the charges against him.

Hussain, who made about $30,000 of his $200,000 in savings, said these incidents would happen again as long as there was money inside, adding that people had no other solution.

The Association of Banks in Lebanon announced the closure of banks for three days due to growing security concerns, and urged the government to pass the necessary laws to deal with the crisis.

The authorities have been slow to pass reforms that could enable them to access $3 billion from the International Monetary Fund to ease the crisis.

Among the pending laws is the Capital Controls Act, which is still under discussion by Parliament.

In his absence, banks imposed unilateral restrictions on most depositors, allowing them to redeem limited amounts each week in US dollars or Lebanese pounds.

The value of withdrawals in Lebanese pounds is declining, as the local currency has lost more than 95% of its value since 2019, and approached a new low of about 38,000 against the dollar this week.

Banks say they allow exceptional withdrawals for humanitarian cases, including health care payments, but depositors say the banks have not adhered to this.

In the first incident yesterday (Friday), a security source said that the man who stormed the Byblos Bank in Ghazieh was able to recover part of his money before his arrest, adding that it was believed that the weapon he had was a toy.

In another incident, a gunman with a cartridge pistol entered a branch of Lebanon and Gulf Bank in the Ramlet al-Baida area of ​​Beirut to retrieve savings estimated at $50,000, a bank employee said.

After that, Muhammad Ismail al-Moussawi said over the phone that he had broken into the Lebanese-French bank with a fake gun and had managed to get $20,000 in cash from his account, adding that he would hide.

The Banque Libano-Française told Reuters that the incident lasted five minutes, and none of the employees was hurt.

On Friday afternoon, at 5 pm, a banking source said that a man had opened fire at a branch of Bank Med while he was trying to access his savings.

The source explained that the man is a member of the Lebanese security forces, and there were no reports of injuries.

Friday's incidents came on the heels of two other incidents in the capital, Beirut, and in the town of Aley on Wednesday, in which depositors managed to recover part of their money by force, using toy pistols that were mistakenly believed to be real weapons.