“As a result of successful offensive actions”: the RF Ministry of Defense announced the complete liberation of the Kodema settlement

The settlement of Kodema in the DPR was completely liberated from nationalists as a result of successful offensive operations by units of the Russian armed forces. This was stated in the Ministry of Defense of the Russian Federation. Also, the department noted that during the day the Ukrainian troops did not carry out an offensive in the Nikolaev-Kryvyi Rih direction due to heavy losses. The Russian Aerospace Forces, rocket troops and artillery continue to deliver precision strikes on units of the Armed Forces of Ukraine in this direction, the Defense Ministry stressed. 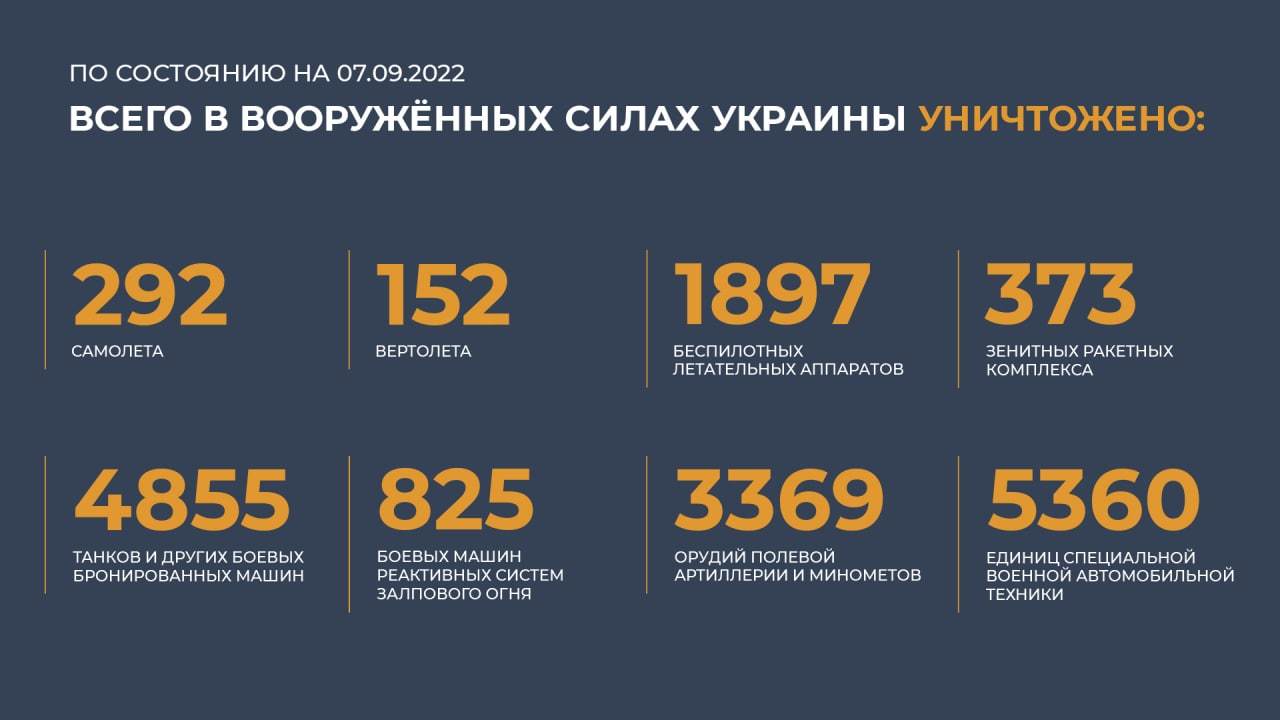 During the day, Ukrainian troops did not carry out offensive operations in the Nikolaev-Krivoy Rog direction due to heavy losses in manpower and equipment.

This was announced during a briefing on September 7 by the official representative of the Russian Defense Ministry, Lieutenant-General Igor Konashenkov.

The Russian Aerospace Forces, missile troops and artillery continued to deliver precision strikes against units and reserves of the Armed Forces of Ukraine in this direction.

The high-precision strikes of the RF Armed Forces hit the command post of the 24th mechanized brigade, manpower and military equipment of the 46th airmobile brigade and the 61st infantry brigade.

The ammunition depot of the 406th artillery brigade of the Armed Forces of Ukraine was also destroyed near the village of Peremoga in the Nikolaev region.

Fighters and air defense systems of the Russian Federation destroyed the Ukrainian MiG-29 in the Kherson region and shot down the Su-25 in the Nikolaev region.

Konashenkov also noted that after significant losses, the personnel of the 57th motorized infantry brigade refused to carry out combat missions and arbitrarily left their positions in the Kherson and Nikolaev regions.

“In total, in the Nikolaev-Krivoy Rog direction, the enemy lost four tanks, six infantry fighting vehicles and five other armored vehicles, two pickup trucks with heavy machine guns and more than 150 military personnel in a day,” Konashenkov summed up.

Also on russian.rt.com “Suppress any sympathy for Russia”: why nationalist battalions continue to be created in Kharkov

A high-precision air-based weapon destroyed a fuel storage facility intended for military equipment of the Armed Forces of Ukraine, with a volume of more than 5.5 thousand tons.

In addition, a blow was struck at the deployment point of the Kraken national battalion.

Up to 30 nationalists were liquidated, ten vehicles were destroyed.

Konashenkov said that the Russian military, as a result of successful offensive actions, finally liberated the Kodema settlement from the nationalists.

The RF Armed Forces destroyed workshops for the production of rockets for the Ukrainian Alder multiple launch rocket systems, three depots of rocket and artillery weapons and ammunition, as well as an American-made counter-battery radar.

Over the past day, Russian air defense systems shot down eight Ukrainian UAVs, intercepted 20 HIMARS and Vilkha projectiles, as well as a Tochka-U ballistic missile.

The Ministry of Defense of the Russian Federation stressed that the presence of representatives of the IAEA on the territory of the Zaporizhzhya nuclear power plant does not stop Kyiv, attacks on the ZNPP continue.

The Ministry of Defense reported that the radiation situation at the Zaporizhzhya NPP was normal, but after falling into a transformer substation, the city was left without electricity.

As reported on the morning of September 7 at the representative office of the JCCC of the DPR, over the past 24 hours, 34 cases of shelling by the Armed Forces of Ukraine were recorded in Donetsk.

The militants used heavy artillery of 155 and 152 mm caliber and mortars of 120 mm caliber.

In total, about 178 different shells were fired on the territory of the DPR.

The settlements of Zaitsevo, Gorlovka, Novobakhmutovka, Makeevka, Yasinovataya, Yelenovka, as well as five districts of Donetsk came under fire from the VFU.

Four civilians were injured of varying severity in the Petrovsky district of Donetsk and in Novomaryivka.

A girl died in the Kirovsky district.

The representative office of the Luhansk People's Republic did not record shelling of settlements over the past day, Andrey Marochko, an officer of the People's Militia of the LPR, said in his Telegram channel.

Marochko also said that in the area of ​​\u200b\u200bthe settlements of Soledar and Artyomovsk, the Ukrainian military “under the threat of physical violence take away valuables, vehicles and food from the local population

The Ukrainian command does not pay attention to the actions of its subordinates, and the police do not respond to complaints from residents, Marochko stressed.

Meanwhile, the official representative of the People's Militia of the LPR, Ivan Filiponenko, reported significant losses among the nationalists.

Over the past day, up to 45 enemy personnel have been eliminated, two armored personnel carriers, four units of special vehicles and two artillery installations have been destroyed.