“Together with the units of the people’s militia”: Shoigu announced the hacking of the echeloned defense of nationalists in the Donbass

Allied forces hacked into the echeloned defense of Ukrainian nationalists in the Donbass, the Russian military took control of a large defensive center of the Armed Forces of Ukraine in the Pesok region, Russian Defense Minister Sergei Shoigu said during a conference call. At the same time, he pointed out that the Ukrainian soldiers left a large number of wounded during the retreat, who were provided with medical care by the military personnel of the RF Armed Forces. Along with this, the head of the Russian Defense Ministry noted that the Armed Forces of Ukraine continue to attempt attacks on the territories controlled by the allied forces in order to "create the illusion of the ability of Western curators to launch an offensive." 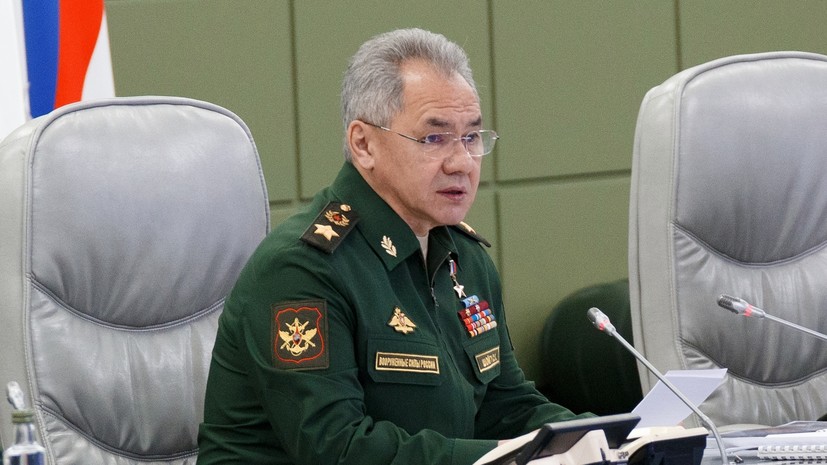 Russian troops, with the support of the forces of the Donetsk and Lugansk People's Republics, broke through the defense of the Armed Forces of Ukraine in the Donbass, Defense Minister Sergei Shoigu said at a conference call in the department.

“Over the past two weeks, the Russian Armed Forces, together with units of the people’s militia of the Luhansk and Donetsk people’s republics, have taken control of a large defense center of the Armed Forces of Ukraine in the village of Peski.

The echeloned and engineered defense of the nationalists has been hacked,” Shoigu said.

According to him, retreating, the Ukrainian army left a large number of weapons, and also abandoned the wounded, who were provided with qualified medical care by the Russian military.

The head of the Ministry of Defense of the Russian Federation also noted that the Russian military reached the administrative border of the Nikolaev region in the Aleksandrovka region and liberated the Blagodatnoye settlement.

At the same time, the enemy suffers significant losses, trying to organize an offensive in the Nikolaev-Krivoy Rog and other directions.

“I emphasize that this action was planned by Zelensky’s office with the sole purpose of creating an illusion among Western curators of the ability of the Armed Forces of Ukraine to conduct an offensive,” Shoigu said.

Speaking about high-precision strikes on important military targets in Ukraine, the head of the defense department said that over the past month, 601 units of heavy weapons and artillery systems, mostly of Western production, were destroyed and 174 command posts of brigade and battalion levels were hit.

In addition, during this period, 19 aircraft, six helicopters and 188 drones were shot down, and 226 HIMARS rockets were intercepted.

The Minister noted that the influx of foreign mercenaries is declining.

According to him, their number has decreased by more than 3.5 times since the beginning of the NWO.

“We will continue the liberation of Donbass and the creation of conditions that guarantee the security of the Russian Federation,” Shoigu explained.

The situation around the Zaporozhye NPP

Sergei Shoigu devoted a separate part of his speech to the situation around the Zaporozhye nuclear power plant, which has been regularly shelled by the Armed Forces of Ukraine using Western weapons since mid-July.

“Since July 18, 29 attacks have been recorded, 120 artillery shells have been fired, 16 kamikaze drones have been used.

At the same time, the Ukrainian authorities openly lie that the Russian armed forces, hiding behind important energy facilities, are shelling the Armed Forces of Ukraine from long-range artillery systems.

I responsibly declare that we have no heavy weapons on the territory of the nuclear power plant and in the surrounding areas.

I hope that the IAEA commission will be convinced of this personally, ”the head of the Ministry of Defense explained.

According to him, Kyiv creates a real threat of a nuclear catastrophe in Europe by striking at the ZNPP facilities, which is nuclear terrorism.

He also pointed out that Kyiv continues provocations, despite the visit of IAEA specialists.

On September 1, not only the Zaporozhye nuclear power plant was fired upon, but also the route of movement of the mission members.

An attempt to seize the station was also suppressed, Russian troops destroyed two sabotage groups and self-propelled barges with troops of the Armed Forces of Ukraine.

Also on russian.rt.com “Several times”: the IAEA spoke about the violation of the physical integrity of the Zaporizhzhya NPP

“The United States and the European Union deliberately hush up the situation around the station, thereby encouraging such reckless actions.

In turn, Russia is doing everything to ensure the safe operation of the Zaporozhye NPP.

We hope that the objective results of the activities of the IAEA mission will be communicated to the world community.

I emphasize that in the event of further provocations, all responsibility for possible emergency situations lies entirely with the Ukrainian authorities, ”Shoigu concluded.

The day before, the Russian permanent mission to the UN requested a meeting of the UN Security Council for September 6 “in the light of the ongoing Ukrainian shelling of the ZNPP”, as well as “the reckless provocation of the Kyiv regime aimed at disrupting the visit of the IAEA inspectors to the station.”

At the same time, IAEA Director General Rafael Grossi, following the results of the initial assessment of the situation, announced the repeated violation of the physical integrity of facilities on the territory of the Zaporozhye NPP.